Things to Look Out for Around Preuilly in April

Of all the months, April is perhaps the time when the natural world changes the most. It is clearly a month of two halves.

Cherry blossom in our orchard (with almond behind). 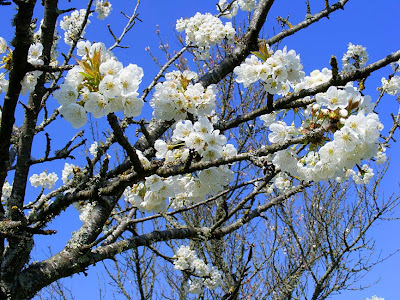 Early April will reliably bring out the hibernating homegrown Brimstone butterflies, followed by the African migrants: Hummingbird Hawkmoths, Painted Ladies, cuckoos, swallows and martins. A few will already have arrived, but the bulk will come in early April. Also the European Orchard Bees Osmia cornuta will be on the wing, so important for the pollination of early blossoming fruit trees. The roadside ditches and banks will be covered in Cowslips. In the ancient and undisturbed forest, Violet Oil Beetles congregate to mate in the flowering Wood Anemone patches. Bumblebee queens quest for suitable nest sites, zigzagging low over the leaf litter and investigating tree roots. Fields will be covered in yellow dandelion flowers and white Common Daisies. Morels can be found in old orchards and gardens.

Oil Beetles have been getting a lot of publicity lately in the UK, with Buglife launching their Oil Beetle Hunt. Members of the public are invited to submit their sightings of these remarkable creatures to help establish their current distribution and abundance. Please contribute data if you can, as these beetles are becoming rarer. Buglife's information on how to identify them, their life cycle and behaviour is excellent. 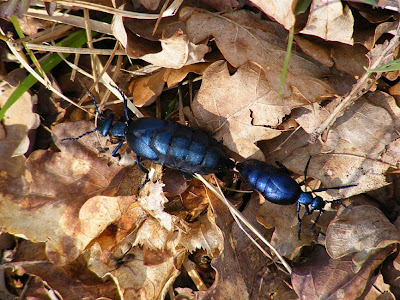 By late April, they are joined by flitting Orange Tips and Violet Fritillaries, the Green Frogs croaking and the Swifts will have arrived. Overnight all the dandelions transmogrify from egg yolk yellow petals to ephemeral spheres of seeds. The Orchard Bee's better known cousin, the Red Mason Bee O. rufa is flying now too.

On the roadsides, the Early Purple and Lady Orchids will be flowering, along with the Common Star of Bethlehem, Cuckoo Pint and Primroses.

A friend emailed us a few days ago to remind us that we are coming up to the season for baby hedgehogs. Fewer than half of young hedgehogs make it to one year old. Many will die on the roads. Hedgehogs are by far the most common roadkill species here. Over a quarter will be poisoned (by slug pellets and other garden chemicals usually). Baby hedgehogs are unbelievably cute, so if you want an awwwwwwgh moment, check out these images. Please drive carefully at night, and leave the slug control to the hedgehogs.

Look out for La Banque Alimentaire volunteers in early April, collecting food aid at the supermarket. Please contribute something if you can.

There is a newly formed club for people who want to improve their French or English. It's called Café Franco-Anglais and is part of l'Association Nomades set up by Marie-Nicole Suzanne. I went to their last meeting, which was centred on an English afternoon tea (complete with proper clotted cream, scones, fruit cake and cucumber sandwiches). It costs around €6 per person per meeting to cover the refreshments and meetings are held at Au Paniers d'Alice in La Celle-Guenand. Marie-Nicole can be contacted by email. The next meeting is 30 April. I am planning to go, and they are a fun bunch of people, so why not join us. It doesn't matter if you can't come regularly - a number of people who attended last time don't live fulltime in France. Association Nomade also co-ordinate a system of placing English and French language books in small restaurants and libraries around the area. You can find their books at Au Panier d'Alice in La Celle Guenand, l'Image in Preuilly, le Jean Bart in le Grand Pressigny, Chez Gigi in St-Senoch and the library at Abilly. They hold regular literary (or sometimes history) themed meetings.

Susan, I agree about April, my favorite but it makes us very poor as being the Sims birthday month.
Me (61), My Daughter (38) and my Father (90) all between today and the 4th.
April is great in both hemisperes.
Summer to autumn, winter to spring.
Leon

Happy birthday Leon. You're so young!
Keep it that way!

I enjoyed reading your blog. If you are looking for a good, non-toxic slug deterrent check out Slug Shields. I have used them with success!

I've read about the Cafe Anglo Francais before, and would love to attend the meeting. Unfortunately we will be back in the UK by then, but at some point we will hopefully manage to coincide a visit with a meeting.

I can't wait to get out to France to see some of the beautiful sights you have tempted me with today!

Association Nomade held a very stimulating event last night 'au Panier d'Alice' on prehistoric stone tools and their modern equivalents (the president of the Friends of Grand Pressigny chateau museum is holding a series of these locally so look out for a repeat). What a nice group of people, ages between maybe 14 and 90! The meal afterwards was excellent and very good value. All in French, too! I learned that you can protect hostas from slugs by surrounding them with sharp stones. We have plenty of those!

Pauline and I went to the ancient and current tools evening this week... very interesting. M. Geslin gave a talk about the different tools and their comparison with the modern equivalent. Pauline is going to write an account on Touraine Flint in the very near future. The meal afterwards was good too!!