One of the many things that have been taxing my brain is the matter of the kitchen extractor fan.

My original idea was to have a fan that took the hot air and grease from the cooker, up the old chimney, and into the fresh air. A certain kitchen shop told us this is illegal (which it isn't*) in the attempt to sell us a €1600 recycling fan, but it's OK, I took against them for a number of reasons and we weren't going to go with them anyway. Still - it put the idea of a recycling fan into our heads. These have apparently improved massively over the years and now actually work (the one we had in London had the efficacy of an asthmatic ant).

We have decided we want an inclined hood. Our ceiling is rather low and I am tall (a giant by local standards) so the normal type of hood wouldn't work for us - I would be looking down on the cooktop through the top of the hood, and forever bashing my head. As I am grumpy at the best of times, this may not be helpful. 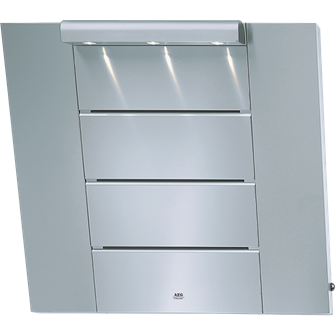 So I have decided on the AEG HD8795, a shiny shiny piece of design that claims to work, will fit between the stovetop and the ceiling respecting all laws about space between things. Of course, these are cheaper in the UK than in France (by about €150), but there is a shop soiled one for sale not too far away. We may take ourselves off to look at it over the weekend, but if it is too scratched we will have to find someone who can bring us a big cardboard box from the UK - the sort of UK electrical places that have massive discounts won't deliver to France.

*It's illegal to send extractor fan stuff up a chimney that is being used as a chimney, but we told them it was not in use and they still wouldn't shift on the issue.
Posted by Simon at 09:00

Oh well, you just squashed my idea of a cooker hood venting into our chimney. I can understand why this is a BAD IDEA with a live chimney - noxious fumes coming back into the kitchen would not be good.
If you go with this fancy bit of kit, it will be pretty incongruous with the rest of the old house. Should be a good talking point for years.
I have a flat spot on my forehead as well.
Ian...

If your chimney is a dead one, and the fan in the unit is powerful enough to vent all the way to the top, no problem

Yup, ours has got and exclusive chimney. In fact, there are twin chimneys in the kitchen. I don't really know why. This is not an old house.

By the way, you may keep that misplaced "d" and use it later, if you like. :)

Walt. What other sort of chimney woul* one expect you to have? Surely exclusive is only the start of it!

*I thought I might use that excess d here, if it's OK with you.

We bought an inclined hood extractor for pretty much the same reason. Even though our ceiling isn't low, I am tall and regular hoods always resulted in me banging my head against a corner very often... not nice! It's been great.. you'll love it.