Or, at least, hats off to one orchid loving roadside maintenance person.

I had to spend an hour in Descartes the other day, while I waited for new front tyres to be fitted to our less glamorous car. I walked into the centre of town from the garage and on my way spotted a bank that had been strimmed back to the dirt in a frenzy of spring gardening neatness. All except a flourishing Lizard Orchid leaf rosette, which had clearly been carefully strimmed around.

Lizard Orchid in Descartes saved from
the strimmer. 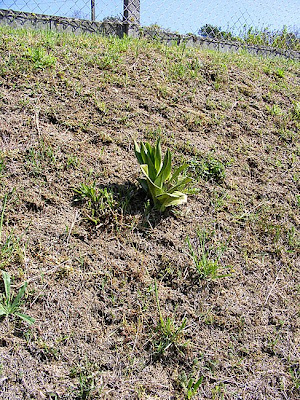 Later in the day I mentioned this to my friend Pauline. Her mower man, Fréderic was there when I visited, whizzing around the lawn on the ride-on, dodging the canes she had put in to mark the orchids in the grass. She told me that he has been rather struck by this practice and has started mowing around the orchids in his own lawn too. She also said that Descartes is particularly conscious of its status as a ville fleurie, especially now that it has gained its third flower.

All this made me think I'd better go and check on the state of the orchid patch by the mediatheque in Preuilly. So far, so good. The commune hasn't mowed, and there are about 50 orchid leaf rosettes in amongst the wild thyme. But what really surprised me was that one of the Spider Orchids was actually flowering. None of the Early Spider Orchids in our orchard is closer than 10 days or a fortnight away from flowering I reckon.

One little Spider Orchid, gamely flowering on the
mediatheque naturestrip. 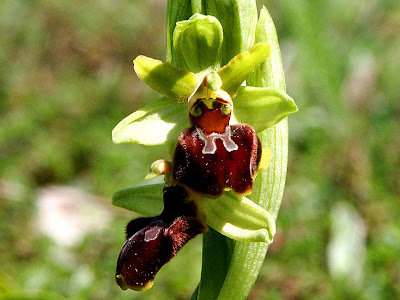 It looks like an ordinary Early Spider to me, but just to make absolutely sure it isn't the rare, very early flowering Small Spider Orchid, I have called in the local expert. Monsieur Pelle's response when I told him where I found it was 'Oh la !' and he is coming over on Monday morning to check it out.

Email ThisBlogThis!Share to TwitterShare to FacebookShare to Pinterest
Labels: nature and wildlife, orchids, Towns and Villages near Preuilly

That is good news!

Susan, I just came back from a walk in the vineyard, and I saw many orchids on the two damp plots of ground we looked at together a few weeks ago. Sorry I didn't take my camera out with me. All the vegetation seems to be far in advance for the season this spring.