Now that April has arrived I've gone out into the 2km squares I have been allocated by STERF and chosen my exact transects for surveying. I have tried to get a range of habitats, both good and bad, to provide a true picture of the state of the butterfly population in the Touraine du Sud.

A Swallowtail Papilio machaon (Le Machaon) taking nectar from a
wild violet on the edge of the woods. 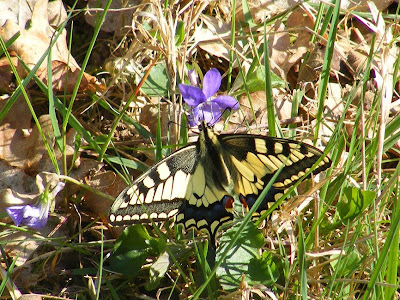 My survey sites are:

A female Short-tailed Blue Everes argiades (L'Azuré du trèfle)
- she and her habitat (below) are in serious decline. 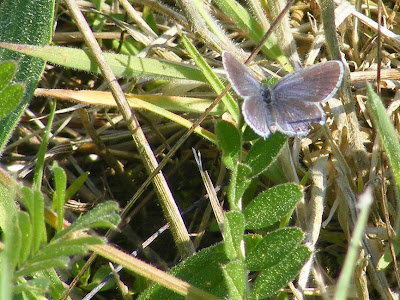 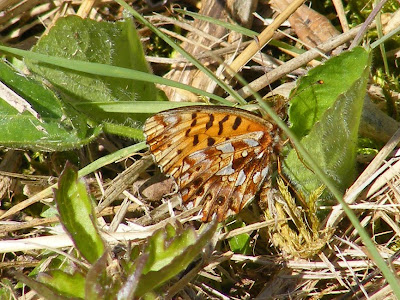 Orange-tips have been recorded in exceptional numbers this year, but by the time I did my survey their numbers were dwindling somewhat (they are an early spring species), and perhaps my choice of habitats did not favour them. You tend to encounter them along ditches and damp patches with plentiful supplies of Cuckoo-pint, the host plant.

Habitat number 9 (those readers who travel between
Preuilly and Yzeures on the D104 may recognise it). 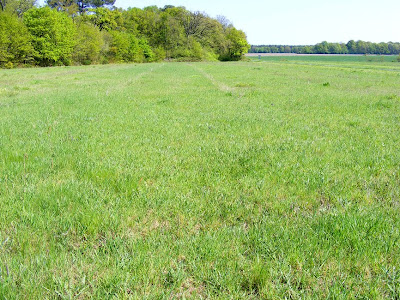 The poorest habitat was number 4, a track through broadacre crops (at the moment wheat). This transect produced no butterflies at all. The most productive habitat was number 1, a south facing calcareous grassland slope surrounded by woodland. Neither of these results is unexpected for this time of year. Intensively cultivated broadacre farms are generally poor butterfly habitat, whereas a nice warm south facing slope with some nearby woodland for protection is ideal for early spring.

Susan,
I know nothing of butterflies but find it peaceful to watch butterflies flutter by in our backyard in Melbourne.
Tell me, is it unusual to see butterflies in Autumn. I saw several while working around the house this weekend.
Leon

Leon: It is possible to see butterflies in any month of the year, and many species are still in good numbers in mid-autumn, whether you are in Australia or Europe.

Hi Susan,
Brimstone, Small White, Violet Fritillary, and Orange-tip up to a point, seem not to be as choosy as the others. Any reason for that? Or they just have a broader range of flowers to feed from? I know less than nothing about butterflies.

CHM: The Brimstones and Small Whites can be encountered anywhere, but the Violet Fritillaries are very definitely associated with sites that have their host plant, violets. Both woodland and dry natural grassland sites therefore suit the Violet Frits. The Orange-tips need ditches or damp areas with lots of cuckoo-pint.

i am doing the same thing in the UK 1976-2015 guess that is long enough to get a good picture. I have been interested in butterflies in France since 1991 and realised that is not only the CAP in France that affects the indigenous stock there, but since many migrate to the UK, we are also affected by what happens across the channel and throughout Europe. My favourite area is the Cevenne, but I have been to the East -
Jura as well and Provence. http://www.nature-photo.co.uk