Yesterday morning I read my blog post about what I have done so far this week, and instantly felt fatigued.

This meant that I had to have a relaxing day, and luckily there was the perfect accompaniment for a nice sit down and a cup of tea: a royal wedding. In the interest of being more French, I watched it on France2. 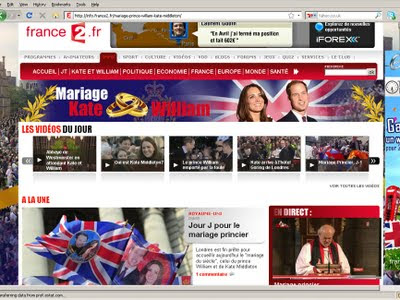 They were giving it the full works - 5 hours of uninterrupted coverage, a huge team of reporters and translators, and specialists in all matters of Royal protocol. We were told all about the various regiments of the British Army, the carriages, and every difference (and similarity) between "la forme Anglican" and Roman Catholic worship were pointed out. Everyone was most impressed and excited by the horses and gushing about the spectacle of it all.

Part of the Royal Wedding team. 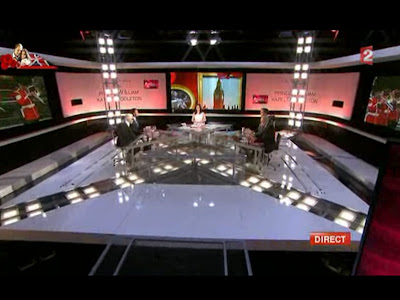 At times like this who would believe that the French are republicans?

I burst out laughing and could not stop laughing and laughing when I read, "In the interest of being more French..." I'm still laughing as I type this. LOL

Now back to the rest of it. Of course the French are republicans... except when there is a royal wedding elsewhere. The glamour of it all. LOL

You can't hide good breeding. Watching the Royal Wedding on TF2!
Seriously, it was nice that the occasion had such global appeal.

Craig: my mother thanks you :¬)

chm - it was an interesting cultural excercise. I am getting more French every day!