This pair of Spotted Craneflies Nephrotoma appendiculata was snapped by Simon as they mated on our back fence. The larvae resulting from such a union live in the soil and can be a garden pest, especially in areas of cultivation. 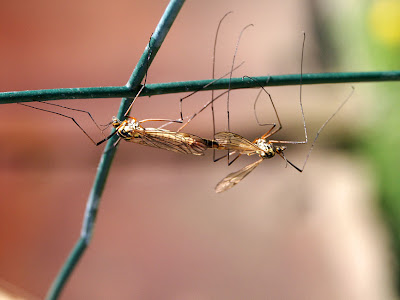 However, these 'leatherjackets', as the larvae are known, dessicate very easily, and are likely to do poorly this year, since it is so dry (at least, so far). The newspaper headline the other day translated as 'Touraine fears a record drought already', because we had less than a quarter of our average rainfall in March and no rain at all so far in April. Since these should both be quite wet months, gardeners, farmers and wild fauna and flora could be in for a very difficult time of it.

Sorry, I deleted my comment.
Southern California is not in a drought at least for this year,but you are having difficulties. The weather is so different now days with this climate change. Hopefully you will not have extremely hot temperatures this summer.

It's raining here in Saint-Aignan. We haven't had a great amount of precipitation, but it has rained off and on all day. Hope it's raining there too.

We had about 5 minutes of almost rain at 18:00. According to meteo de France it rained all day here...

Nadege - who knows. We have tomato plants about to flower, but there's still time for it to all go wrong.

I've been seeing these crane flies all around the vineyard road for a couple of days now.