In early May last year I purchased 10 asparagus crowns from a local grower who comes to Preuilly market in the summer. She only sells asparagus, walnut oil and cherries. Most of her asparagus is the thick white type that the locals prefer, but she also brings some thin green shoots too. When she had crowns for sale (called pattes or griffes in French, meaning limbs or claws) I asked her what type of shoots they would produce, saying that I preferred the thin green ones. She said that's what they would do if I didn't blanch them by piling dirt over them as they grew. The crowns cost 30c each (a third of the price of crowns at Loches market). At the beginning of the season she was charging a very reasonable 5.50€ / kilo for the spears.

A spear of asparagus emerges through
the straw mulch last year. 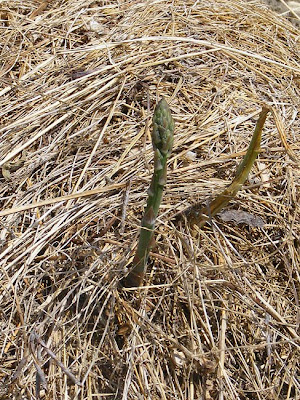 Almost immediately after planting most of the crowns had produced a shoot. They all had to be left to produce ferny growth so the plants would establish vigorously.

Sadly, I think our lack of water means that asparagus is not going to thrive for me. This year they have produced a couple of weedy shoots each. All very unpromising, especially since my visit to Nick Freeman at La Maloterie in the Brenne. I'd gone over there to discuss developing a nature walk for his farm, which he runs as a chambre d'hôte with his wife. He has so much asparagus he is quite bored with blanching and freezing. The asparagus bed is in quite a damp area, on what was a cowyard. Amazingly, he grew the plants from seed last year, and is already harvesting kilos of spears. He very kindly gave me a fresh bunch and it was the best asparagus I've had for a long time. I barbecued a few spears for dinner that night and steamed the rest for lunch the next day.

Asparagus that has escaped into the vineyard. 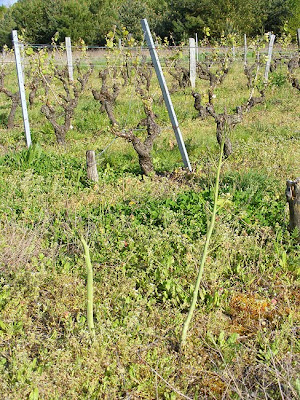 A couple of days ago we visited Ken and Walt and I photographed some 'wild' asparagus in the vineyard. This rugged looking stuff, which can be seen at this time of year all over the Touraine on roadsides, ditch banks and fallow land, is not really wild, but the progeny of garden escapees. Genuine wild asparagus is actually a much more prostrate plant, and only found on the north-west coast of France. The local roadside asparagus can be harvested and eaten, but it is likely to be stringy and bitter.

Never grown it, but I've heard the experts say that asparagus likes LOADS of feed/manure but does not like damp - it's often grown in a ridged bed.
Do you know anyone with an unwanted dung-heap? Or maybe you'll have to start keeping pigs.

IanJ is right, Susan. Dry sandy soil creates the best asparagus. But it needs absolutely tonnes of rich feed... and clean soil. We made a mistake when we first tried... perfect soil, loads of food... but we hadn't removed all the couch/twitch grass [which also liked the feed!] Result... choked sparrowgrass. We also hadn't made our ridge to spread the roots over high enough. We might try again, but the sprue we've just eaten as pudding [because the steamer took longer than the microwave with the soup...] was superb! Came from the sandy soil on the way to Descartes and was picked early this morning and arrived at eight AM on the market at GP. At 6€ a kilo it is almost not worth the trouble growing it [especially as we are in couch grass paradise!!]
On a totally different subject...
Pauline said you came past this afternoon in the sleek black cat!

Tim: Simon and Célestine would have gone past with clients this afternoon.

We have eaten asparagus gathered out in the vineyard in past years, and have found it sweet and tasty, with a good texture. This year, however, I think the weather went too hot to fast. We actually really like the white asparagus we get from a grower at the Saint-Aignan market. His prices go down below 4 euros a kilo in May and June.

Celestine looked majestic as she came past.
All this talk of asparagus makes me salitate (that's the word verification!) I have fond memories of the restaurant "Oudt Leiden" whose amuse-bouche was a teeny portion of fresh asparagus mousse. As opposed to the place at the wildlife park down the road from Leiden, which served tinned white asparagus in full asparagus season.

Pauline. Passing your place enabled me to demonstrate to our visitors the persuasiveness of Célestine's klaxon.