Frost Candles at the Ready

The lid of the frost candle tin has instructions for
calculating how many you need to put out. 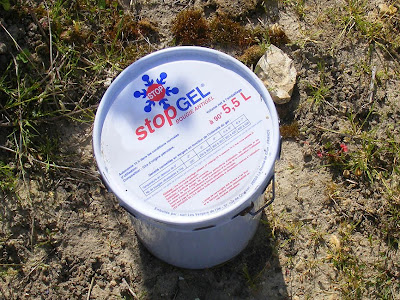 After an extended and unusually warm spell the weather has been considerably cooler the last few days. Although the days eventually warm up to maybe 18 - 20°C, the nights are getting down to very low digits (1 - 3°C). The winegrowers are worried that after an early period of rapid growth in the vines, we may yet have a frost which sets them back disasterously because they already have significant tender new shoots.

Frost candles set out in the vineyard. 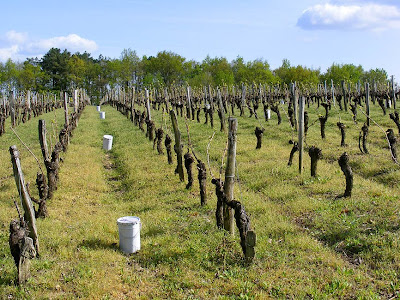 Consequently, the bougies antigel have been deployed in the vineyards near Ken and Walt's, just in case. This is the first time we have seen them, and Ken said he had never seen them before in the years they have lived there. According to the StopGel lid, the candle inside is parafin wax and needs to be placed at different densities in the vineyard, depending on the temperature expected. It seems that the candles work by heating the air just enough to prevent freezing, but they are not suitable to use if there is any breeze, or if the temperature drops below -4 to -6°C (depending on how much moisture there is in the air).

In the event, I assume they weren't used, as we haven't had a frost, and the day we saw them there was a stiff cold north-easterly breeze. I suppose in the Loire, where frost damage is sporadic and limited, these candles are the only practical and economical solution. Frost protection is clearly a very technical affair, and the infrastructure is expensive. Other, colder, places in France have traditionally used wood-burning funnel stoves, but I assume the somewhat counter-intuitive modern sprinkler systems for preventing frost damage that I have read about cannot be used in France because it is illegal to irrigate wine grapes here.

Susan, you are right, the bougies have not been lit. Another frost-fighting method is huge fans that look like airplane propellers. When there's a risk of frost, they turn them on to keep the air moving enough to prevent frost damage. I guess it works. At least one vigneron around here has a couple of them installed.

Ken: I read about them and forgot to mention them. Apparently some US vineyards even use helicopters! It's all about knowing where the inversion layer is and how the lie of your land affects the temperature - very complicated stuff.

This post reminds me of the little tilley lamp we used to keep in our outside loo to stop it from freezing up in winter. I was about 12 when we first had an indoor loo. Happy days !!

Jean: Fortunately, growing up in subtropical Queensland, we didn't have those problems with our dunnie! Did you see Mark's comment on Jim's Loire about burning old car tyres in the vineyards to create a black haze to protect the vines in the 'old days'!

Spring frost can be a major problem in the Loire and vineyards in other parts of France – indeed many parts of the wine world. In 2008 Muscadet lost around 80% of the crop due to an April frost. 1991 was the last devastating frost in Western France.