Recently English friends of ours who have a house in Preuilly acquired an old brass fireman's helmet. It was purchased at auction in a small town in southern England, but the helmet originally came from Preuilly-sur-Claise. This isn't the first instance of English friends of Preuilly returning the town's heritage. A couple of years ago, two watercolours of churches in town arrived back via an art dealer in the south of England and the kindness of the English couple who bought the portfolio of paintings. 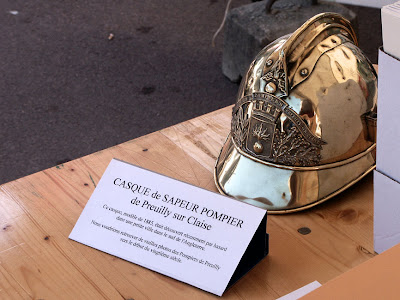 Fireman's Helmet from Preuilly sur Claise. This helmet, the 1885 model, was discovered recently by chance in a small town in the south of England. We would like to find some old photos of Preuilly's firemen from around the turn of the 20th century.

Firemen are popular modern day folk heroes in France. You can not only buy the traditional calendar ( if you are lucky, with pictures of naked firemen, but usually just of firemen training in the full protective kit) at the end of the year, with proceeds going to their Christmas party, but you can also buy statuettes and various other collectables sold both commercially as souvenirs or as fundraisers for their activities. Here in Preuilly most of the firemen are volunteers, and like in many small towns, they run a cadet scheme for teenagers, who learn first aid, abseiling, how to drive the fire truck and all sorts of confidence and discipline boosting skills. The first Sunday of the month the town klaxon sounds, and the mayor treats the firemen and women to drinks in the salle de fêtes. It is frequently the pompiers and not the gendarmes who officiate and direct traffic at town events, and they are kept busy with rescue services such as traffic accidents, emergency airlifts to hospital and removing wasp nests from buildings as well as the occasional fire.

What a find, and how fortunate
someone with a connection to
Preuilly found it. I had to
look up the definition of
"abselling" by the way.

This comment may appear twice.
First time it just flitted
away.

I, too, had to look up abseiling. My 1969 American Heritage Dictionary ignores that word completely as well as my old Word speller. However, Wikipedia gave me what I think is the right definition. The evolution of language! [I'm not a creationist! LOL]

Firemen really are heroes. I cannot imagine the courage it takes to go into a burning building to rescue a person or a pet.

On the other hand, you have pictures of nekkid firemen? Ooh la la!

It was those Calendar Girls in Yorkshire who started the extremely tasteful calendars of unlikely people posing nude for good causes. Strategically placed flowers, teapots or indeed fireman's helmets cover up anything remotely naughty. The Girls collected an enormous sum for the Cancer unit at their local hospital and were so successful there was even a film made of it, with Helen Mirren!