I wrote in December about the joy of goo. Ken emailed us to say he was having trouble finding it in his local Brico shop, which surprised me, because for me, it is everywhere.

Or at least, it was everywhere. On Thursday we went to Bricodepot for various stuff, and I went to pick up a couple of cans of their 2Euro goo. Imagine my surprise (and confusion) when the cheapest goo there was 7Euros.

I passed on the opportunity to buy it there, and on Friday morning went instead to Bricomarché in Yzeures. It was even weirder there. The goo (which had previously been available in 4 different brands and on a shelf) was now in a locked cabinet, and 3 times the price it previously was. As I needed to use it, I called for the lady with the key, who confirmed this was the new law.

Not the DALEK army.
This may be the last mousse I ever buy. 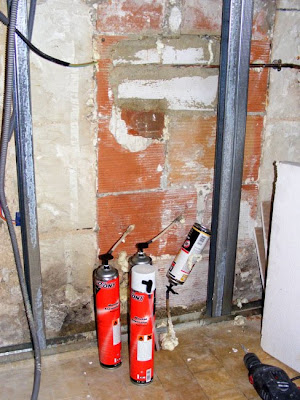 I assumed it was a solvent and kids thing, but apparently it has a new recipe which reduces the amount of MDI (methylene diphenyl diisocyanate) in the product. MDI is a serious irritant and not good for us, so from 11 February the old style nasty mousse is no longer available, and new healthy mousse is on the shelves. Which is probably a good thing.

Even if it is an expansive* change.

It's called progress, Simon - most of us have to adhere to silly rules because someone else might do something stupid, harm themselves and blame someone else. And it always costs us money.

It's a wonder you don't have to have a license to own an electric kettle.

Expansive...sorry... NO you're not... you're just after a CHEEP laff!
If you are going to start being that punny, you really have gone native.
Anyway, you've got something to play with indoors today!!

Having read up about MDI I am glad it is now banned - nasty stuff.

Well it's still for sale in my Screwfix at £2.99 - maybe I should stock up. Needs to be used in a very well-ventilated area.

Ian - isn't that kind of ironic? I am only ever use it in small spaces