That's what yesterday was all about.

I had high hope of getting a lot done, but instead I did lots of little things towards being able to finish stuff today (or tomorrow).

The first job, and one I have been doing for a couple of days, is painting the kitchen door. Last weekend I worked on the doorframe, cutting out pieces that had split and replacing them. This means that the door should shut flat and we will be able to put draft excluder on all of the frame. During the past couple of days I removed the glazing and sanded the door itself, and started rebuilding little bits where the previous fittings were. Now they are sanded back level with the rest of the door, I have started the painting process.

I will never win a gold medal for woodworking,
but when I do things they stay done. 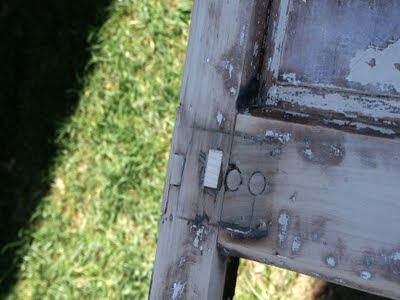 Disaster (or at least, narrowly averted disaster) on the tiling front though: I was just about to start grouting the tiles when I realised that one corner of one tile was moving up and down when I rested my elbow on it. This meant removing the tile, chipping back the glue, and putting a new tile in. I think my issues on Tuesday were because I hadn't made the glue runny enough, because yesterday's glue was made runnier, and the tile set a lot easier. 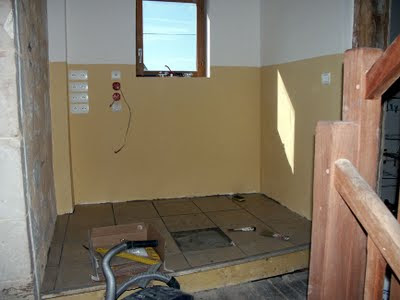 Also an almost disaster on the painting front. We are painting the bathroom walls two colours, and as I removed the masking tape I removed a large(ish) lump of paint. I don't know why the paint hadn't attached to the undercoat properly, but it means I will have to do some touching up.

Added to that, we are deep in drought (spring isn't even a month old and already the locals are in doom and gloom mode) and I bought the wrong stuff at BricoDepot the other day. 80kg of the wrong stuff.

Still: it could be worse, I could have a sore neck and back.

Me? I'm a solid little lump of happiness!

Email ThisBlogThis!Share to TwitterShare to FacebookShare to Pinterest
Labels: Bathroom, Kitchen, Our house in Preuilly

Ah Simon ....Chin up, man.
You have made wonderful progress and things are being done well.DIY is always a learning experience, frustrating, hair tearing, 2 steps forward and 4 back, but a learning experience.
Your knowledge and expertise will be bloody amazing by the time you are finished.

Simon - You are my inspiration. Easter is for working on our house too. Have a fun and safe Easter to you and Susan
Leon and Sue

Actually, I'm doing ok - peeved rather than anything else. The thought that I am an inspiration brings a smile though :¬)

Hi Solid,
About 6'ish on Monday!
And the missing paint on the wall is a good excuse to run a line of electric green mosaic tiles round the bathroom!

Back to your tiling episodes - it's not difficult, just tedious. Did you find that once you grouted it all just came up perfect? (and no-one notices the imperfections unless you tell them). How come the front edge is soooo not square?

Andres: like all houese in Preuilly sur Claise, the house isnt square. However, the front wall is square to one side wall, so this is the line I took. One of the tiles creacked while I was grouting, so when we have time the whole lot will have to come up and be done properly. Or we buy a rug.