What Are the Magenta Coloured Orchids?

At the moment there are 5 species of orchid that I know for sure are flowering in the Touraine, including the first Early Spider Orchids in our orchard, which came out yesterday.

The most common orchid you will see in April is a strong magenta colour, easily spotted on the side of the road as you drive by. You may also encounter them in damp areas of open grassland. What you and most of the locals don't realise is that there are actually two species of magenta orchid that flower at this time. Unless you look closely you can't tell them apart.

The ones on the roadside are usually Early Purple Orchids Orchis mascula or Orchis mâle in French. Usually they have leaves with big purply brown spots on them. 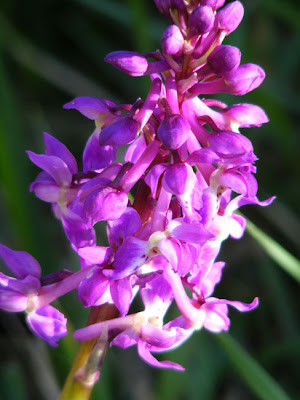 The other species, more likely to be encountered in open grassland that is prone to be a bit wet, is the Green-winged Orchid Anacamptis morio or Orchis bouffon in French. Its leaves are always unspotted and its upper petals always have fine green or dark red veins. My observation is that Green-wings have more spotted lower petals too. 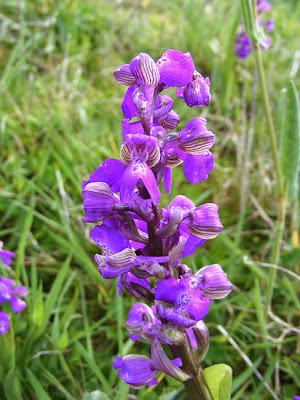 Both can have flowers that vary in colour from white to deep purple red, and the Early Purples sometimes don't have spotted leaves (but they never have the strongly marked veins on the upper petals).

The Green-wings are particularly associated with old vine parcels,
like here near Ken and Walt's, where they are abundant. 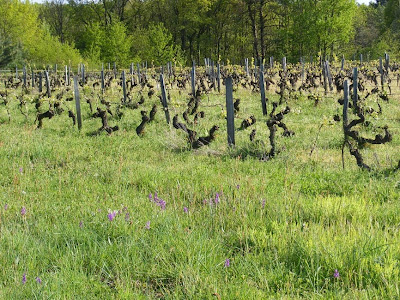 I've written more extensively on these two species over on Loire Valley Nature. The page on Early Purple Orchids is here and the one on Green-winged is here.