Vespertilionidae is a family of bats with members occurring on all Continents except Antarctica. With 407 known species, it is the second largest mammal family (Old World Rats and Mice is the largest family, with over a thousand species). Most of them eat insects which they locate on the wing using ultrasound, but they also make sounds audible to the human ear when they are communicating amongst themselves. Most vesper bats are small, between 3 and 13 centimetres long and weighing 40 to 80 grams. 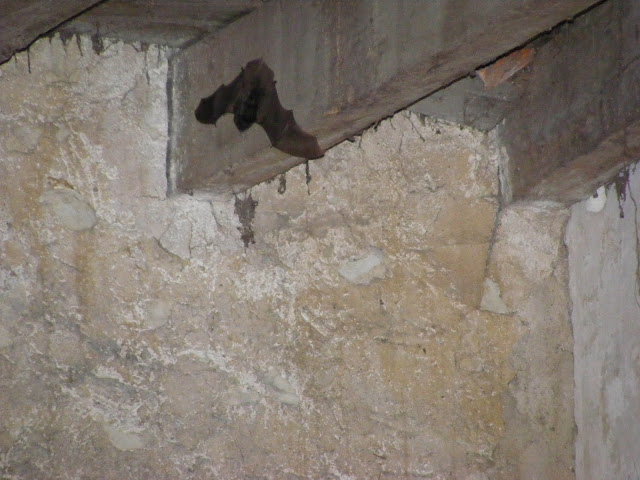 They live on average about 5 years and are preyed on by birds and snakes. Some of the French species may migrate to take advantage of better weather, and all the European species hibernate. All are protected in France but many species are threatened by habitat destruction.

The one in this photo was flying around our garage in June. It is very dark, with broad wings, large for a vesper bat, so it may be a Barbastelle Barbastella barbastellus (Fr. Barbastelle d'Europe).

Button mushrooms, or champignons de Paris as they are known in French, are the species Agaricus bisporus. Globally two and a half million tonnes of this mushroom is produced, half of which is coming from China. Europe produces 30% of global production, mostly in Poland, the Netherlands and Spain. Button mushrooms represent three-quarters of total mushroom cultivation in the world.

In France a hundred thousand tonnes of button mushrooms are produced, against an annual consumption in the country of one hundred and forty thousand tonnes. Three-quarters of French production is in the Touraine and Loire Valley around Saumur, where one can find numerous former underground limestone quarries now transformed into mushroom farms.

De Prunner's Ringlet Erebia triaria (Fr. le Moiré printanier) is a rather rare (localised, but abundant where it occurs) Alpine species that we saw in the Haute Pyrénées while on holiday in July 2021. Like all the Alpine Ringlet species it is very difficult to identify to species level as they all look the same. I had to get expert help with this one, especially as it was flying a bit late in the season. 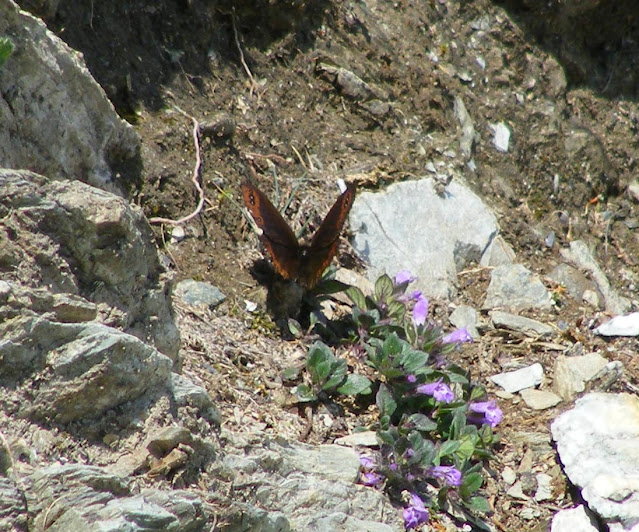 They occur in dry poor grasslands between 800 and 2500 metres above sea level. This one was at about 2000 metres.

The Pygmy Thyris fenestrella (Fr. le Sphinx pygmée) is a day flying moth found all over calcareous areas of central and southern Europe and into Asia Minor. The species is warmth loving and the adults fly during the summer months. The caterpillars eat clematis. 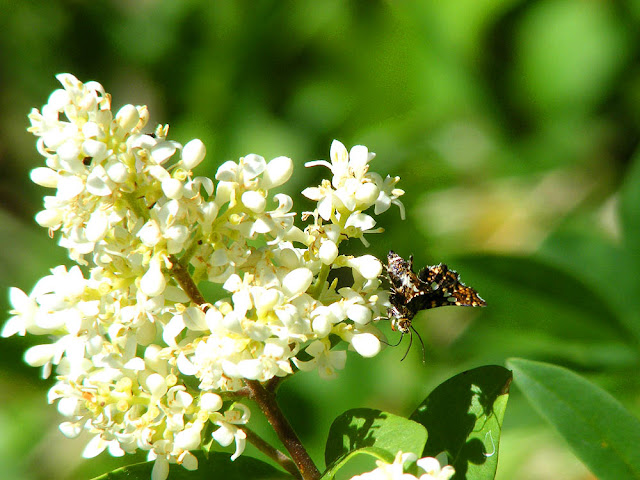 The species gets its scientific name because it has a series of translucent patches or 'windows' in its wings. They look white in this photo.

I photographed this one in June at Chaumussay when I was checking for orchids. It is nectaring on Wild Privet Ligustrum vulgare  (Fr. le Troène commun), another lover of calcareous soils.

Some photos of a walk I took around Saint Rémy sur Creuse on Monday 15 November. The village sits on the current bank of the Creuse River, with extensive troglodyte dwellings built into the ancient high limestone cliffs that once formed the river bank. Many of these were occupied by weavers in the past and the terraces form their own mild microclimate.

Walking Through the Fog Around Chambon

On Thursday 18 November we walked around Chambon, so that was two days in a row. It was foggy the whole day, damp and cold. Nevertheless the walk was invigorating, with Joel making us go up and down hills several times for 10 kilometres. It really got my endorphins going, but Simon really struggled with his glasses fogging up and needing his Ventoline. Here are some photos from the walk.

Here are some photos from a 5 kilometer walk around Chambon Wednesday 17 November. 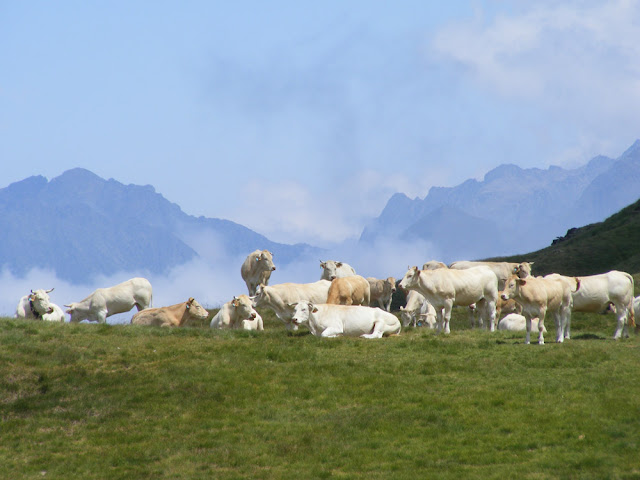 Here are a few photos from the walk I did on Thursday 5 November around Charnizay.

More Repairs to the Church at La Celle Guenand 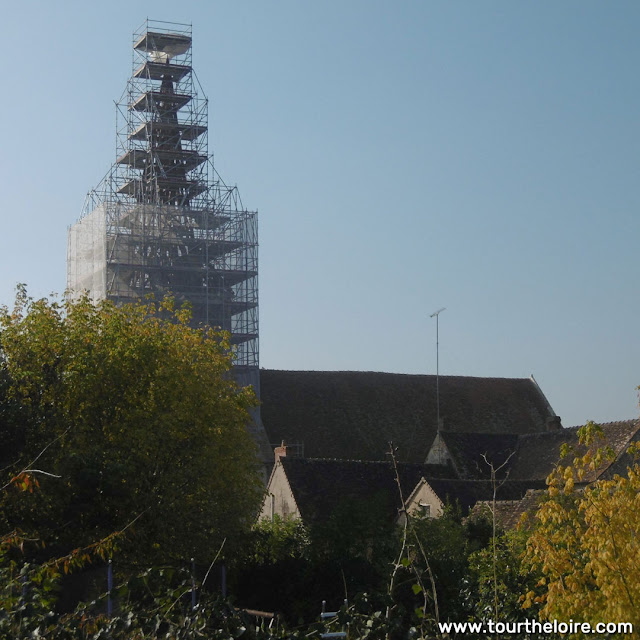 The steeple on the church at La Celle Guenand is being repaired. it dominates the view and is quite distracting as you come down the hill from the direction of Ferriere-Larcon, especially as there is a new stop sign to contend with at the entry to the village.

Here are some photos from our walk around le Grand Pressigny on 10 November.

Email ThisBlogThis!Share to TwitterShare to FacebookShare to Pinterest
Labels: Pictures of Chateaux, walking

Summer Jauneaud, who runs the Loire ConneXion, organised a private visit of the Chateau and gardens of Villandry, with guided tour by owner Henri Carvallo. The Loire ConneXion is a social group that brings expats and locals together for drinks and outings.

Henri Carvallo gave us a potted history of the Chateau, the last of the well known Loire Valley chateaux from the Renaissance. It was built in 1532 by Jean le Breton, financier to Francois I, who demolished the earlier 12th century fortress on the site. Like Azay le Rideau was intended to be, it is a U-shaped building, but unlike Azay le Rideau, the building terminates in square pavilions, rather than round towers, indicating how architectural fashion had moved on from the pure Italianate of Azay le Rideau to something more French at Villandry.

Jean le Breton was also interested in gardens and in his time set his chateau in splendid ornamental gardens. Jump forward to the early 20th century and medical researchers Joachim Carvallo and Ann Coleman acquired the chateau in 1906. They first set about restoring the building and creating a family home, but then they turned their energies to the garden. They felt that a Renaissance chateau deserved a Renaissance garden. And it is their garden that people come to see today.

The gardens opened to the public in 1920 and have been managed organically since 2009. The Carvallo family no longer live in the Chateau itself, but in an apartment in the enormous stable block, along with most of the nine full time gardeners and two apprentice gardeners who manage the grounds. This has allowed the interior of the Chateau to also be opened up to the public, and about 50% of visitors pay the extra to see inside the building.

Because the framework of the garden as a whole is so good it is worth visiting at any time of year. But because the most famous part of the garden relies on formal parterres planted with vegetables for their decorative effect, this is not really a spring garden as so many others are. This is a garden which peaks in late summer and early autumn, when all the fruit and vegetables have matured.

Our visit started at 4 pm, on a dull November day when sunset is at 5.30 pm, so light conditions were not the best for taking stunning photographs. Nevertheless, I think you can still get a good idea of how impressive these gardens are.