Patte de loup is an old variety of French apple, very resistant to pests and disease. The fruit keeps a long time, with a sweet taste and an acidic finish, sometimes a hint of aniseed.

The variety comes from Maine et Loire, to our west, where it has been grown since the Middle Ages. Legend has it that it was Anne of Brittany's favourite apple. 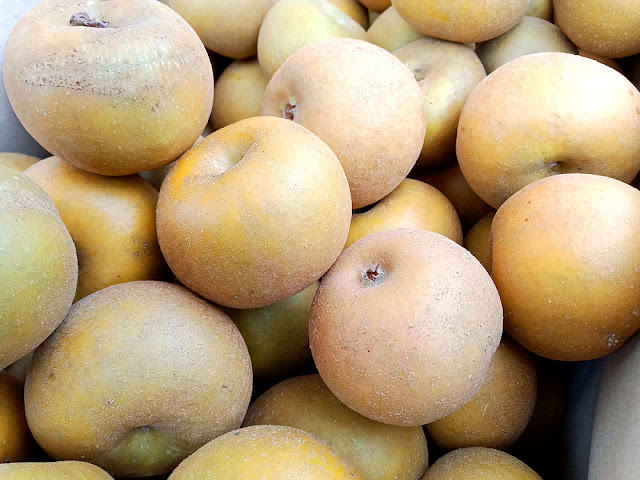 Patte de loup means 'wolf paw'. Supposedly they are named for the scarring that commonly develops on their skin as they have a burst of rapid growth, which is said to resemble the mark made by wolf claws, or the shape of a wolf's paw.

I buy them regularly from my local organic apple orchard at the Saturday market in Preuilly, but you don't see them much in the supermarkets. They can be eaten raw or cooked in tarts or compotes, and pair well with cheese or cured meat. 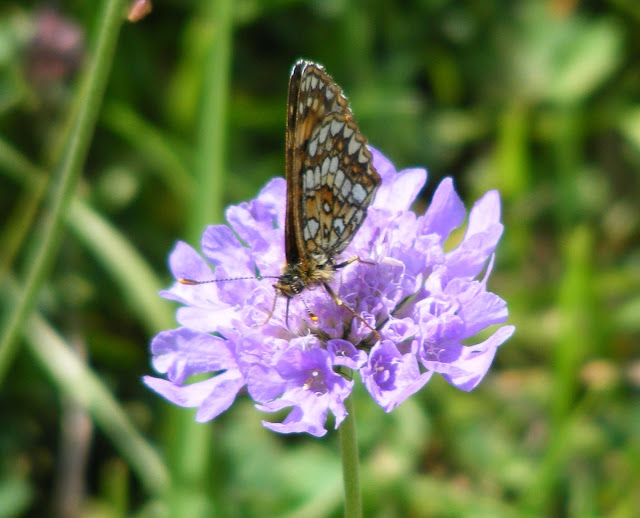 The False Heath Fritillary Melitaea diamina (Fr. le Damier noir) is a widely distributed but localised butterfly, that can be abundant where it occurs. I photographed this one in July last year in a windy mountain valley near Cauterets in the Hautes Pyrénées. It is a species that seems to like hilly landscapes with damp grassland such as where I saw it, rather than more gently rolling plains. The uppersides of individual butterflies can be very different from one another, with some being almost entirely black and others being more or less a checkerboard of black and tan with black wing bases. The underside is more reliably consistent.

A Photoshoot at the Chateau Royal d'Amboise

Recently we had some very glamorous clients who were on their honeymoon and wanted to take some photos. Luckily we know a professional photographer, who also happens to have very good links to the Chateau Royal d'Amboise. We were able to set up a special photoshoot in the grounds with Claudette, one of our Citroen Traction Avants, and most excitingly of all, we were allowed to shoot inside and jump the ropes too! We were allowed to do so because in early January it is so quiet at the chateau the staff thought it was a good opportunity to show that stuff still goes on in the chateau even in the middle of winter. Many thanks to Agnes, Samuel and Charles from the Chateau Royal marketing team for being so generous with granting access, thanks to the inhouse guide who obligingly worked around us with the group she was giving a guided tour to, and thanks to Mark from Photograph France [link], who is really easy to work with. So here are some photos of the shoot in progress. 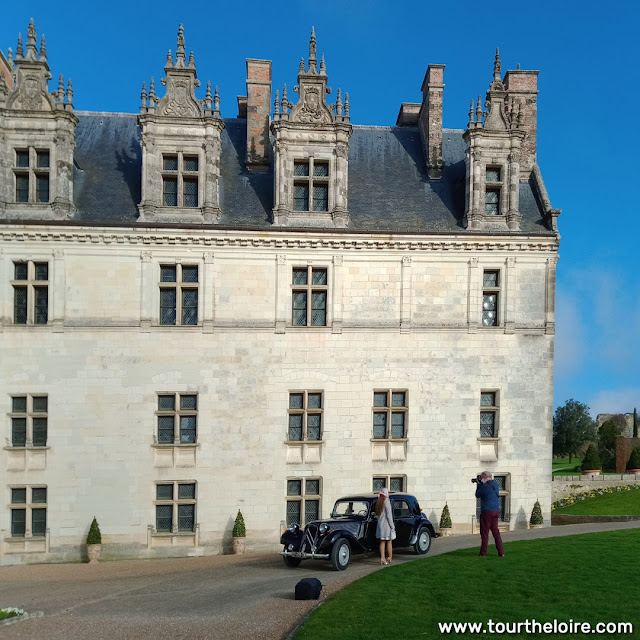 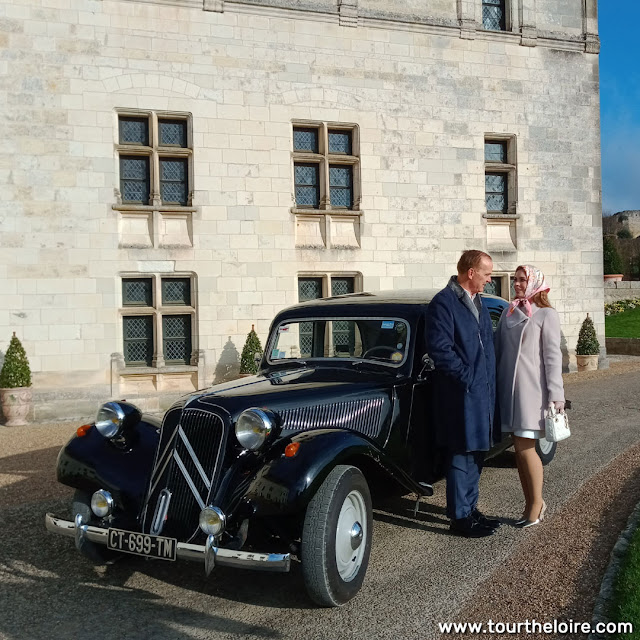 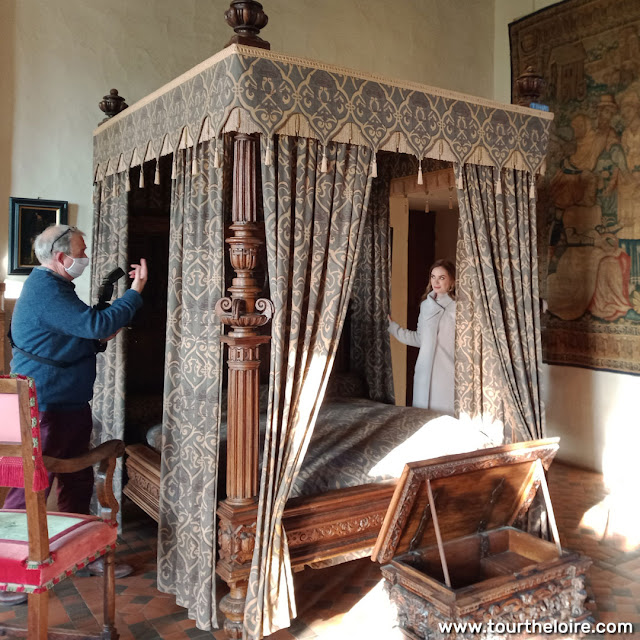 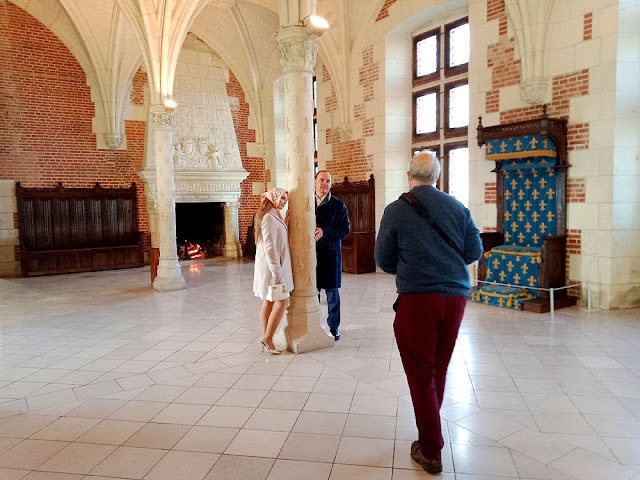 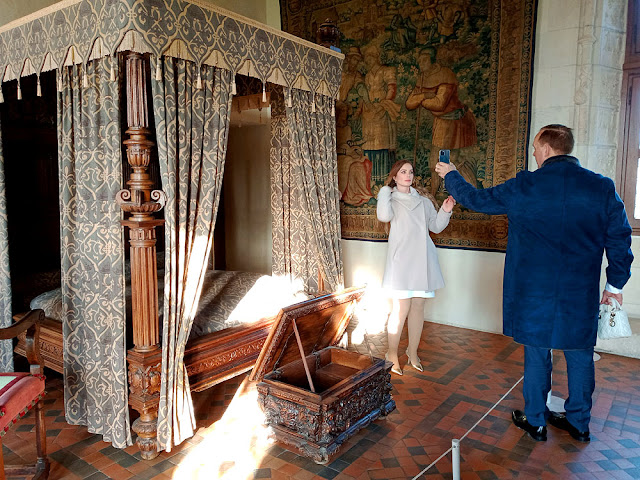 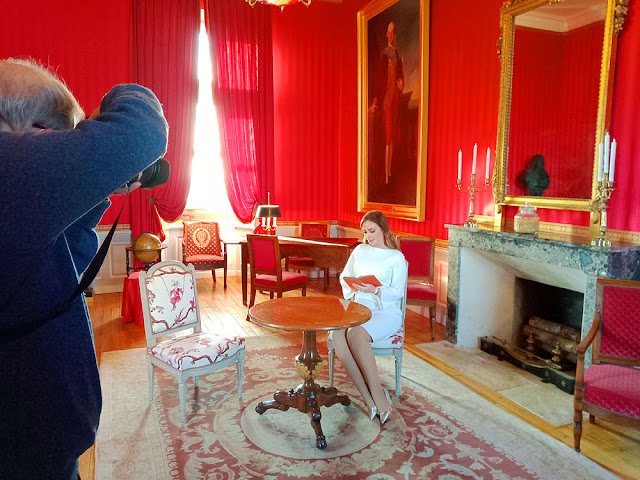 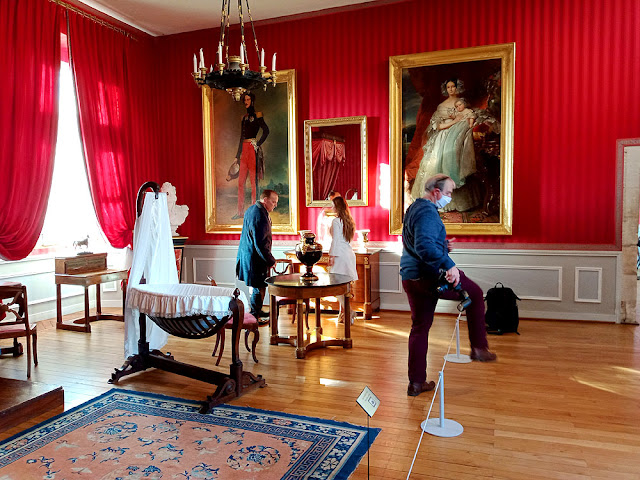 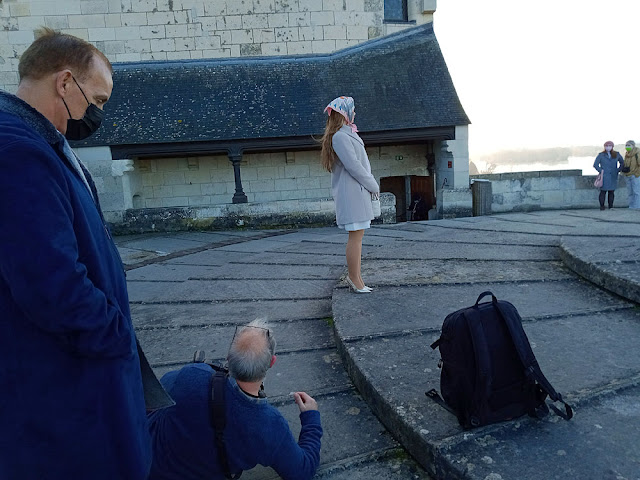 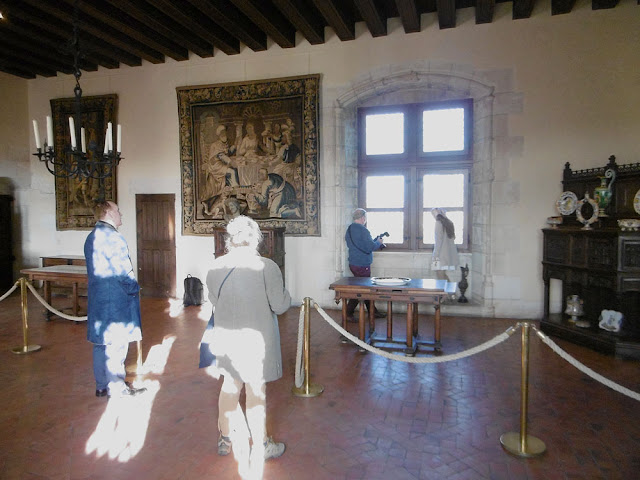 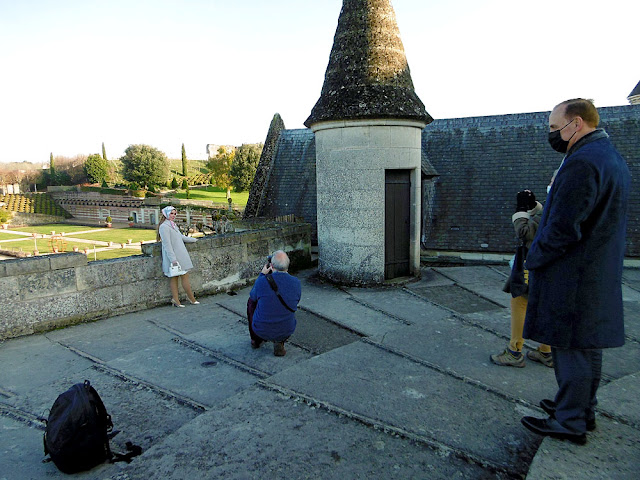 Driving Off Into the Sunset

By chance I snapped this shot of driving across the bridge over the Loire on the autoroute, with the sun setting behind Tours. We'd just finished a day's work and were heading back to our garage in Saint Pierre des Corps. Not a bad view from the office. 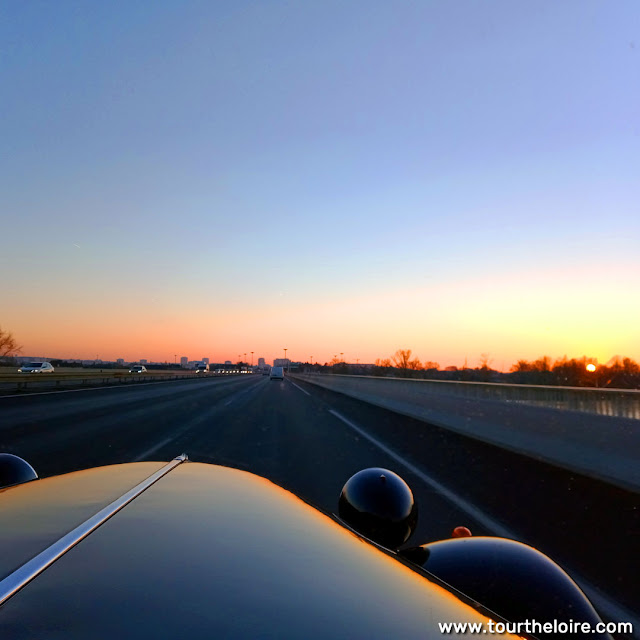 Email ThisBlogThis!Share to TwitterShare to FacebookShare to Pinterest
Labels: The Car and Driving, Tours

Walking Under Leaden Skies From Abilly

On Thursday 20 January we walked an 9 km circuit from Abilly. It started of in beautiful sunshine, but by the end the sky was as leaden as I have ever seen it. Here are some photos.

Email ThisBlogThis!Share to TwitterShare to FacebookShare to Pinterest
Labels: Pictures of Chateaux, walking

Rocamadour is a raw whole goats milk cheese in the cabécous style, made in the Quercy (the département of Lot and some of the surrounding areas) since at least the 15th century. The advice from fromagers is that it is best eaten between April and September.

Cabécous style cheeses are made throughout the Pyrénées, Aquitaine and the Massif Central, but only Rocamadour has that all important AOP certification. This area features fertile valleys and arid karst limestone ridges known as causses dominated by Downy Oak Quercus pubescens (Fr. chene pubescent). The average temperatures range from about 1C in January to 27C in July, with a bit under 900 mm of rain annually and a bit over 2000 hours of sun. Summers are hot and dry.

Only Alpine and Saanen breed goats are allowed in the production of Rocamadour and producers are not allowed a stocking rate of more than ten beasts per hectare. Seventy percent of their diet must be from grazing in their fields, or from hay made from those fields. Their diet can be supplemented with grains (cereals or legumes), oilseed waste pellets and silage, normally all locally produced.

The nanny goats lactate in response to having kids, which are raised on the farm for a month. Then they are selected to either stay on the farm to replace older milking goats or sold to a farmer who will fatten them for meat. The goats lactate for 300 days of the year, giving 2-3 litres a day from two daily milkings. To qualify for the Rocamadour certification the milk must be higher in fat than proteins and the milk from two consecutive days is combined for each batch of cheese.

Rennet is added to the milk and it is kept at a temperature of around 20C for 18 hours so that curds form, after which it is drained for 12 hours, then salted. In times of high production curd may be frozen at this stage for processing later, but it must ultimately be mixed half and half with fresh curd.

The final cheeses are a 4 cm wide disc weighing 35 g, with squidgy interiors and a natural rind. It can be served warm on toast with salad or eaten as the cheese course with fresh bread and red wine. The taste is light and creamy, almost buttery when fresh but it will firm up and become stronger tasting with age.

Just over 1250 tonnes of Rocamadour are produced each year, about a third of it on the farms where the goats are milked, and the rest in two co-operative dairy factories (Fr. laiteries). There are about 100 producers supplying milk, including about 35 farmhouse producers. 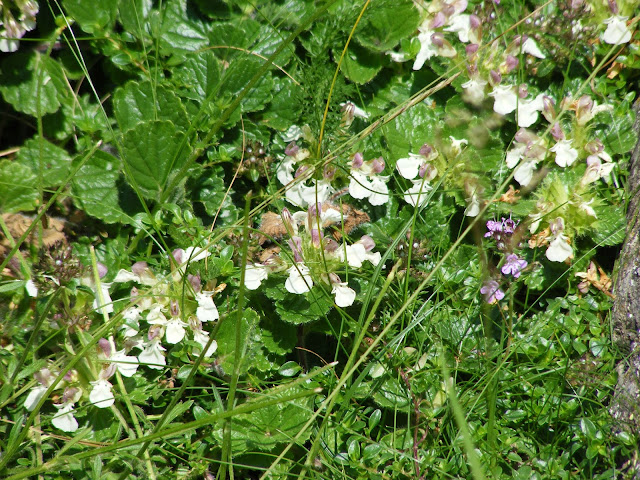 Pyrenean Germander Teucrium pyrenaicum (Fr. la Germandrée des Pyrénées) is more or less endemic to the Pyrenees, as the name suggests. It's not really rare, but it does have a limited distribution, so if you are in the mountains you will see it quite frequently in the limestone areas of the Pyrenees, but nowhere else.

On Monday 17 January we walked a 7 kilometre circuit from Descartes. Here are some photos.

Email ThisBlogThis!Share to TwitterShare to FacebookShare to Pinterest
Labels: Towns and Villages near Preuilly, walking

Over the weekend we had freezing fog and hoar frost. The maximum temperature on Saturday was -2C, but by Sunday we got to 1C and the frost on the trees started falling like snow. Here are some photos I took on my travels in the Sud Touraine while it was a winter wonderland.

The Red Deer Cervus elaphus (Fr. Cerf élaphe) population in the Touraine Loire Valley is thriving. I rarely see the animals themselves though. Just the evidence of their activities.

On Thursday 13 January we did 11.5 kilometres from Le Grand Pressigny along the ridge above the Aigronne left bank, down into the valley, across the bridge, up to the rambling former monastery farm of Grandmont, then along the ridge of the Aigronne right bank, across to the troglodytes and back into town.