Last time we visited France both Susan and I caught something that feels like the 'flu, which has laid us low for a couple of weeks. We're back on deck now, so here goes:

On Sunday we decided to play tourist and visit Fontevraud Abbey. We left Preuilly sur Claise under leaden skies, expecting the day to stay rainy and overcast. We stopped at a rest area just outside Preuilly to take a photo of the colours of the forest around Boussay, before heading towards Chatellerault. 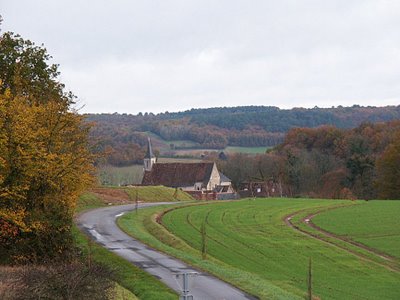 Once past Chatellerault we were on the route D749, a Roman road of amazing straightness with only one bend between Chatellerault and Richelieu, a distance of 30km. Richelieu itself is well worth a visit, being a planned "new town" designed at the behest of Cardinal R himself. The covered market place is amazing, but at the moment the open market is undergoing a rather severe rebuild, and more resembles the battlefields of the Somme than a quaint market. 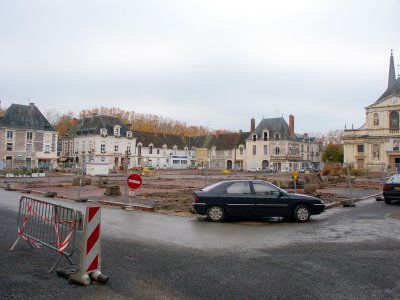 We arrived in Fontevraud just in time for lunch. This was taken at a fairly uninspring Creperie, and was more just refuelling than a gastronomic event. We decided on gallettes (a savory, buckwheat crepe) because it was a way of avoiding having two 3 course meals a day, which seems to have become our standard.

The Abbey itself is really very interesting, even though Susan and I were slightly dismissive at first of it's "newly minted" look. After the revolution it became a prison, and remained as such until 1963. By all accounts it was treated extremely poorly, with even the abbey church itself becoming a 2 level dormitory.The restoration of the abbey complex has been the largest resoration program in France, and once you get past the shiny new parts and find the buidings yet to be worked on, you can see just how much they have had to do. Parts of the abbey are still roofed in corrugated iron and held up with railways sleepers. There are walls patched with bits of old door and metal sheets, and it is obvious that the pidgeons haven't been helping.
The Back of the Abbey, Fontevraud 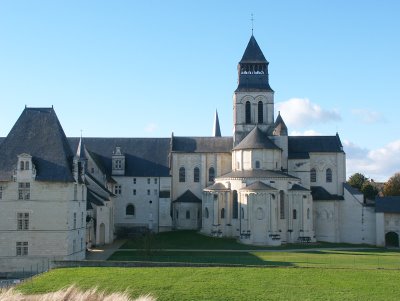 The reason we wanted to see Fontevraud is the Tombs of Henry II of England, his wife Eleanor of Aquitaine, their son King Richard I of England, and his sister-in-law Isabella of Angoulême. Eleanor of Aquitaine became a nun at the abbey after Henry's death. She is a really very interesting woman - one of those middle ages types that some modern day feminists seem to ignore because she doesn't fit in with the "no powerful women" syndrome. (Simon's rant, now over). I had borrowed Alison Wier's book from the library before we left London, which primed me nicely for the visit.

The interior of the Abbey church itself is very plain, with just the effigies and some remnents of wall painting (which Susan remembers, but I don't).
Henry II and Eleanor 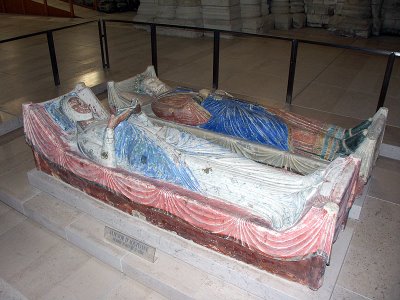 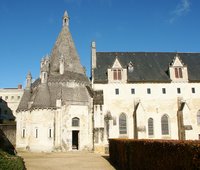 The rest of the abbey buildings are interesting, particularly the kitchen. This was restored in 1906 and given pointy finials to the chimneys, which although not terribly authentic, are quite fun. There are some painted chambers which include portraits of the nuns of the abbey of the time in the scenes of the passion. Some of them are quite humerous, but there are definitely a few pingouins des combat amongst them! 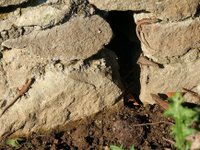 Also well worth a visit are the gardens, which are being restored. We were delighted to see some animal life, even this late in the year. The Violet Carpenter Bees were buzzing around the Bay Trees, and a family of European Wall Lizards (Podarcis muralis) were making the most of the late autumn sunshine.

Email ThisBlogThis!Share to TwitterShare to FacebookShare to Pinterest
Labels: Boussay, Churches, Pictures of Chateaux, Richelieu, Towns and Villages near Preuilly

So far so exciting

We are currently preparing ourselves for another trip to Preuilly. This time we will be signing for the property, paying over the money and meeting a builder about the roof.

So far we have done the money transfer from Australia to France, with the money for the house arriving in the Notaire's account last week - which makes us look really organised. The house insurance is all signed and sealed and last week our French bank card arrived, so at last (we hope) we can access our account and buy petrol on a Sunday afternoon. The banking thing has been really interesting, but not totally stress free.. dealing with 4 different institutions in 3 countries has really complicated the timins - wait for one place to do what you've asked, then you find out you have missed a deadline for another institution. We almost have them all organised and in line, so next transfer should just about go smoothly.

As we found when we moved from Australia to the UK, these things aren't intrinsically difficult. The things that really trip you up are the rules that no-one tells you, because "everyone knows that". It must come in the water when you're growing up. For instance; French current accounts aren't allowed by law to pay interest. Anyone growing up in France knows this...but as newcomers, it comes as a surprise. We only found out when we asked about interest rates - the bank were as surprised by the question as we were by the answer. It also comes as a surprise when you find out you have to actually pay for a card to get your money out. And as for the chequebook............ We can only hope the bank are open and able to explain that to us when we're next in Preuilly!

This time around we will be flying into Limoges (yet another new airport for us) and driving from there. It's a two hour drive according to Mappy, taking us via Montmorillon and St Savin, and hopefully finding a nice Routier for lunch en route. We will be stopping of at Intermarche and Bricomarche (the supermarket and hardware superstore) in Yzeures-sur-creuse to start our new collection of tools and household staples. We plan to do some work in the garden cutting back brambles and ivy on Monday afternoon, so secateurs and gloves will be the first purchase.