On Thursday 1 December I joined Denise and Joel for a 9 kilometre walk around Leugny. We parked by the church, then headed up to the Fontaine Saint Hilaire before slogging it up the rest of the slope to the plateau between the rivers Creuse and Vienne. After circling around in the forest centring on Rond de Chene we descended again to Leugny. Along the way we heard cranes bugling twice and we saw them once, flying in their serious migration V formation.

Email ThisBlogThis!Share to TwitterShare to FacebookShare to Pinterest
Labels: nature and wildlife, walking

Yesterday Susan and I were driving in to Tours in preparation for a couple of days work. We had just entered the Autoroute A10 to skirt Tours, when we were greeted by this sight. 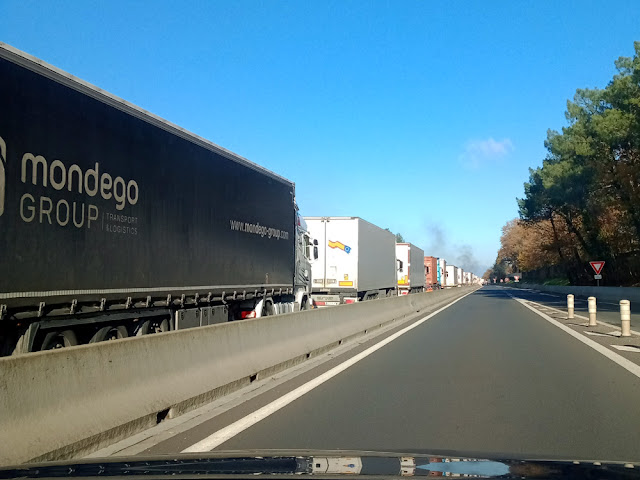 The A10 in Tours is reduced to two lanes at the moment (rather than the customary three) to accommodate an upgrade. The inside lane next to the dividing barrier is closed and coned off to stop people using it, which had an unexpected benefit.  Both remaining lanes were full and stationary, there was a drift of smoke visible ahead, and no-one was going anywhere except for a steady stream of emergency vehicles that were using the closed lane.

We reached the head of the slip road, turned off our engine, and waited. At one stage we had to restart and move as far as we could to allow a police car to pass us on the inside, but basically we sat for about 20 minutes not knowing what was going on.

Eventually things started moving slowly, and we eased into the flow of traffic. At the scene of the emergency there was a line of pompier, police, and autoroute vehicles, and a very sorry looking burned out small silver Peugeot (we think). It was severely damaged front and rear, and most of the plastic pieces had disappeared in the fire. We hope everbody involved is safe, but as I type this there is nothing in the newspaper,

You can almost see the burnt car, surrounded by firemen 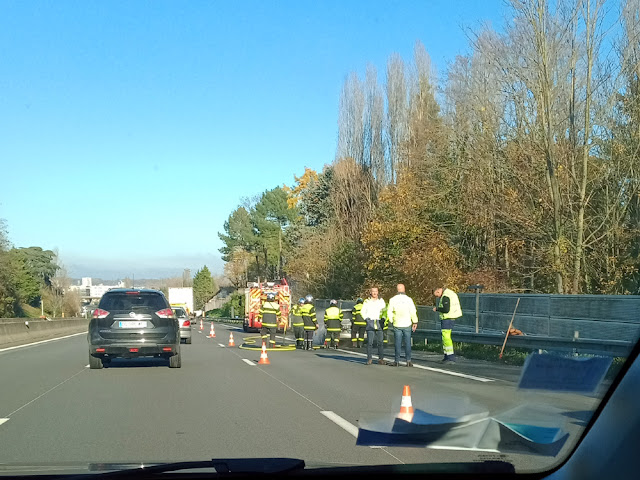 This is a reworking of a post from November/December 2016.

In November 2016 I participated in a fungi foray in the Forest of Preuilly. We didn't find much, but we did find a number of species with distinctive scents

This species, introduced from Australia in the early 20th century, has colonised the forest and is easily found by its stench of rotting meat. Sometimes you can smell it while standing nearby, but usually its pong only impacts when you get down on hands and knees to photograph it.

This nondescript little webcap had a light but definite geranium scent.


Another nondescript little toadstool, and this one really packs a punch. It smells strongly of garlic, and even its mycelium must smell of garlic, as we couldn't see many fruiting bodies, but the more we walked on this patch the stronger the smell of garlic became. The soil must be completely riddled with the fungus ready to burst out as little cream mushroom caps.

Nitrous Bonnet is very common amongst the leaf litter of the forest floor. So are several other very similar Bonnet species. Luckily, if you just pick a couple and sniff them you can usually tell if you've got Nitrous Bonnet or not. This species smells of bleach, often quite noticeably. It's not the only Bonnet that smells of bleach, but it's the one you are most likely to encounter in the forest.

The one above on the table hasn't yet burst its top to explode its spores all over the place. The ones below are completely open and full of grey powdery spores like ground pepper. You can see the dusting of spores on the leaf litter all around the fungi. Earthballs don't pong quite as much as the Devils Fingers but they are definitely noticeable when you get down close to photograph them. We couldn't pin these ones down to a species, except to say that they are not the common species.

We have 44 displaced Ukrainians living in Preuilly or the surrounding villages. One of them, Natalyia N, asked if they could take over the community café, Lieutopie, on last Sunday afternoon. The Ukrainians arrived armed with coffee and biscuits, which they laid out on the tables, then served coffee to anyone who turned up. The event was designed to allow locals to come and meet our new residents and interact in a warm and friendly environment.

Strategically timed for just before Christmas the food and wine fair staged in the events venue Acropyla at La Roche Posay is a great place to try delicacies from other parts of France as well as local treats. It is one of those events which is free to enter, but if you want to taste wine you buy an engraved souvenir glass in a little carry bag for €5 at the door. I didn't bother because I wasn't in the market for wine and it was before lunch on Saturday when I went.

Ukrainians on the Move

Two more apartments in the Cité de Tilleuls are nearing the completion of their refurbishment so two more Ukrainian families can move from their temporary accommodation. The Cité de Tilleuls is a housing development in Preuilly dating from, I would guess, the 1970s, consisting of a number of small apartment blocks. Originally they would have housed workers from the furniture factory, but that closed in 2000 and now many of the apartments are empty. Earlier this year we moved several Ukrainian families into apartments there and now we can rehouse Natalyia P and Natalyia N, who each have a son aged about 11 and a daughter aged about 8.

After picking up some furniture donated by one of my neighbours, a recently widowed English woman, Christiane and I went down to inspect progress on the apartments. Patrice, the painter decorator, was there, and his employee Bruno, who painted our kitchen some years ago. The main problem they've encountered is damp and the apartments have been empty for years.

The apartments are owned by private landlords but managed by the social housing agent Habitat Sud Touraine. For the moment the rent and utilities bills are to be paid by Ficosil, another local government agency who specialise in getting people in difficult situations into housing. One of the Natalyias is working, as a cleaner and aide at the aged care home. Back in Kyiv she was a business woman, with a cheese boutique. The other has just finished a three month intensive French course and has started a work experience placement at a florist. Back in Kyiv she did a variety of jobs and made costume jewellry.