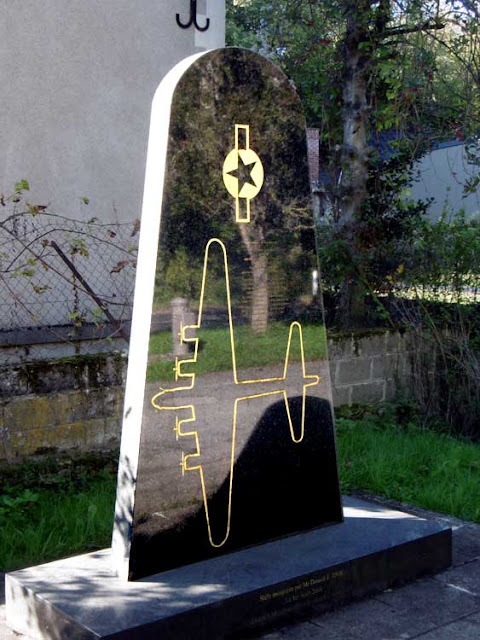 At about 14:30 the aircraft was hit by anti-aicraft fire over Tours, and the nine crew members bailed out at about 22,000'. Four of the crew were taken prisoner and ended the war in prisoner of war camps, three evaded capture and returned to the UK, and two were captured after some time spent evading capture, and were shot by either the Gestapo or the Milice.

The crew were:
2Lt Anthony J Forte, Pilot. Initially escaped - captured and shot by the Milice and the Gestapo, buried at the Brittany American Cemetery St-James, between Fougeres and Avaranches.

2Lt Thomas R Whitmore, Co-Pilot. Injured by flak, but escaped and returned  to the UK 10/09/1944 after spending time with the Resistance. Evade and Escape report 1933

S/Sgt Rawling E O'Leary, Mechanic. Escaped and returned  to the UK 8/09/1944 after spending time with the Resistance. Evade and Escape report 1708

Sgt Donald E Jirik, belly gunner.  Escaped and returned to the UK 8/09/1944 after spending time with the Resistance. Evade and Escape report 1709

In 2003 a memorial was erected where the aircraft fell, close to Montlouis on the southern bank of the Loire River. The dedication in the 1st August 2003 was attended by Donald E Jirik, who had been in the aircraft that day and escaped to England. A sad footnote is that he died the next day in Montlouis.

The Evade and Escape reports are fascinating: I thoroughly recommend that anyone interested in military and French history click through. They give a real picture of how confused and confusing the situation was.

On August 1, 1944, an air raid on the Parcay-Meslay airfield (Tours) was carried out by the Germans (76 B17 bombers).  The B17 Sequachiee (number 43-37876) was hit by German flak, the nine crew members jumped with parachutes and landed unharmed. The plane crashed at a place called La Barre, on the road to Saint-Aignan, near Montlouis-sur-Loire.

Four of them had been taken prisoner. The local resistance was able to recover five of them, three of whom reached England via Spain*. Of the last two, the pilot Antony FORTE and the bombardier Gregory COLLINS, one being seriously wounded. He was treated by Doctor Gautier and surgeon Imbert of Amboise. The latter offered to put the two Americans up in the hospital, but it was decided that they would stay at the home of Mme Gripouilleau, in Lussault-sur-Loire, at 10 Rue du village.

During the night of August 3 to 4, following a denunciation, the Militia and the Gestapo entered the house. The two airmen tried to escape through the top of the hill (a semi-cave house) but the Militia knew the place and the house was surrounded.

At the same time, at the "Châtelier", a bourgeois house in Lussault, the militiamen entered the house and three resistance fighters were arrested (Geneviève LORILLEUX, Yvon LEBLOIS (leader of the local resistance, called "Jean-Pierre") and Robert GUERIN. Mrs. GripouIlleau for having hidden the soldiers) and incarcerated in the prison of Tours. The latter escaped deportation.

*Simon's note - not quite. It appears that they met up with the British army near le Mans

Very interesting but then again I could spend weeks up around the Normandy beaches... My thoughts were 37 Flying fortresses looked a lot for 1 small airfield but then reading further they sent 183 to bomb the oil fields in Germany... American logic perhaps !!

Colin. I think the stats are that less than 1% of bombs hit the target, even a target as big as an airfield. Tours air base had a number of satellite landing strips, so maybe they were part of the deal. In which case "only" 76 may not have been enough 😁

I was at school in Framlingham, Simon.....
the derilict [then] control tower was out of bounds.... so needless to say, I and others used to visit it! The control tower has been restored and is a museum. the runways are still there, although robbed out for hardcore and half the site now seems to be a solar array similar to Paulmy and probably your future Proolie one.