Hanged Men at the Reservoir 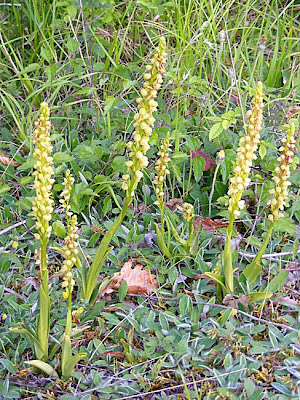 One fine evening in mid-May last year we went for a walk around one of our favourite Preuilly circuits. When we got to the base of the town water storage unit we made a little detour because we knew there should be orchids at the end of it. The detour involves climbing up some steep earth and log steps, then hauling yourself up by a chain on to the top of the mound covering the water tank. Several species of orchids grow on this spot, unseen by passersby. On the day we visited the Man Orchids Orchis anthropophora (Orchis homme-pendu in French) were out in profusion. There were Monkey Orchids Orchis simia (Orchis singe) too, but they had been frosted a few days before and were brown around the edges. Man Orchids are presumably hardier and appeared completely undamaged by the frost. They are quite yellowy on this site, rather than green, and I wonder if this is because of the extremely poor soil they are growing in. 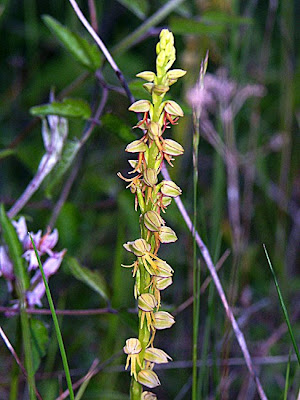 Man Orchids grow on calcareous grassland in full sun and flower from the beginning of May to the beginning of June. They are protected in Centre. The flowers are unusual in that they don't have an eperon (the spur at the back of the flower which holds nectar) but in fact the species is closely related to Lady Orchids Orchis purpurea (Orchis pourpre), Monkey Orchids and Military Orchids Orchis militaris (Orchis militaire) and hybridises with them regularly. In the Touraine, Man Orchids are found almost exclusively only south of a line between Loches and Richelieu, but they are quite common in the Claise river catchment. 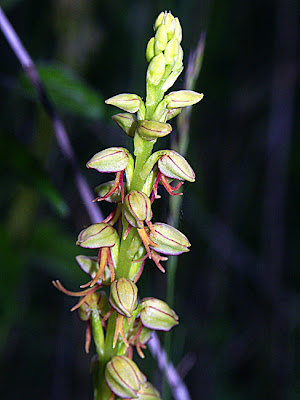 On Tuesday I had to go up to Bertu's to pay our latest plumbing bill, so I opted to walk via the routes rurales and check on the orchids growing on the town water reservoir tank. Plenty of both Man and Monkey Orchids, even in the severe dry on top of the tank.

The water tank is situated behind the chateau on the highest spot in town. The commune of Preuilly manages its own water supply rather than contract it out to a big specialist company. This is one of the reasons our rates are so low. When I went to the mairie to pick up my garbage bag issue about a month ago I was given a sheet outlining the results of various quality tests that had been conducted on Preuilly's water supply. I was proudly informed that Preuilly's water is extremely high quality. The tests show no bacteria, no nitrates, some naturally occurring calcium, iron and fluoride (but not enough to affect health) and no detectable pesticides. The water comes from two bores in middle of town, harvesting water 80 - 90 m underground.

My walk took me along the old defensive embankment behind the chateau, then through the fields - fallow, wheat, oats and canola. The route hadn't been mowed and was full of wild flowers and insects, including my first dragonfly for the season, a clubtail. The Glanville Fritillaries butterflies were flitting hither and thither, along with the occasional Queen of Spain Fritillary and quite a few Short-tailed Blues.