After the tiling the office floor episode, I have now grouted it, and it looks great. All except for the tile that broke whilst I was applying the grout. This annoyed me no end (cue plumbing language and throwing gloves downstairs). One day we may have to lift that tile, replace it, and do the job properly, but until then there is always rugs.

Once the tiles were laid it brought home how much of a mess the first floor landing was. This was no surprise to us, but the new improved tile floor highlighted the state it was in. One day on my knees (and massive amounts of dust) and the situation is now more balanced.

All this activity on the landing has solved one mystery: We have often wondered about the width of the zinc strips nailed to the floor in the doorways. We knew that it was because it was hiding the joint where floorboards laid in different directions met, what we didnt realise is that the floorboards in the doorways have no joists. They simply rest on the stones at the bottom of the door, and the zinc strips hold them up to the level of the floor where there are floorboards on joists. I have removed the zinc and skew nailed the floorboards together, but will have to buy something to hide the 1cm gap between the two rooms.

I have circled the zinc strips 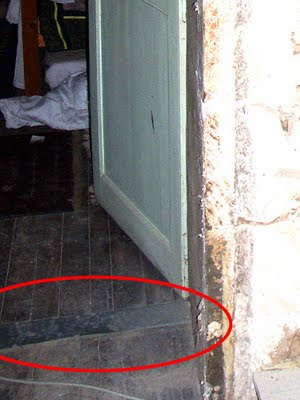 No prizes for guessing in which direction I am progressing 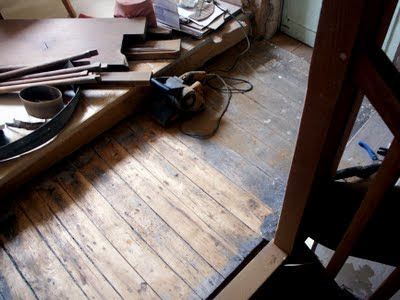 The boards are not in perfect condition, but they are part
of the house's history. 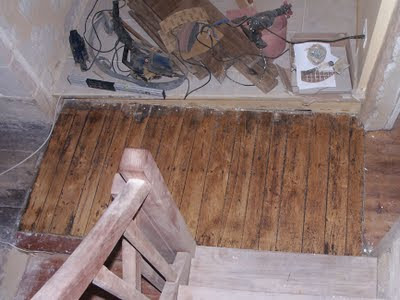 I have also found another banister to complete the hand rail. The new banister was one from the stairs themselves (rather than the horizontal rail) so it needed some adapting, but that is now done.

In between times, we took the opportunity to put up the light over our front door. The wiring has been in place for about 9 months but there was always something else more pressing to do. Needless to say, when we got around to it this was a more complicated proceedure than anticipated because the door frame was in a bit of a state: what started off as "just screw the lamp to the wall" became "first find some wood to replace part of the doorframe, then work out how to fix it, before screwing the lamp to the wall". 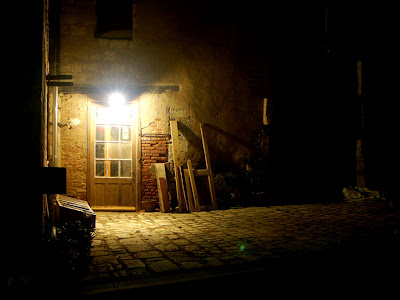 Still - the job's a good 'un. Next step, cleaning the new bathroom floor so tiles can be laid, and getting the plasterer in to do the joints for the kitchen walls and ceiling.

I take my hat off to you guys... you're brave and resourceful doing so much of the work yourselves. Well done!

That outside light is a boomer - I can imagine you two sitting out there on a balmy night with a glass of Touraine of some sorts, cheese and bickies - how perfect.
Leon and Sue

Leon and Sue: That's mean and moody lighting for night photos of Célestine.