The other day I went over to visit Sylvie Navarro at La Chauvelière. She runs a livery stable near Paulmy, as well as having a gîte and managing a gîte on behalf of the Château de Châtelier. When I arrived she was busy worming some horses and her small daughter came running to greet me. 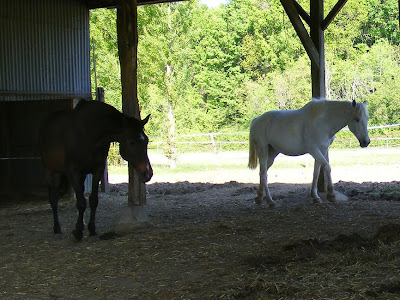 Had I driven all the way from Australia and had I seen an ornythorinque? No, there was too much ocean in between France and Australia, and only in a zoo. Ornythorinques are mignon, apparently. Fortunately I was able to retain some cred by telling her that I had seen in the wild all the other animals and birds in the picture book she showed me when we stopped for a cold drink, and indeed, had sometimes had koalas in the garden.

The gîte at La Chauvelière. 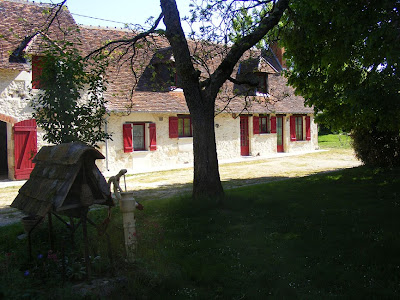 The Navarros live in a really magical place, hidden away in the woods. Sylvie is from Lille, but she clearly loves being able to ride through the countryside here and be close to nature. The farm buildings are laid out in three long ranges. The family live in the far end of the righthand range, and the stable is at the other end. The gîte is in the middle, with a cart shed at one end, and the third range is a modern corrugated iron hangar for machinery, car parking and shelter for the horses. The gîte sleeps up to 10 and would be ideal for extended family groups, especially if they liked cycling or walking. Sylvie even offers guests the opportunity to holiday with their horses, although she admits she rarely gets visitors who arrive on horseback.

A troglodyte dining area in the gîte at Châtelier. 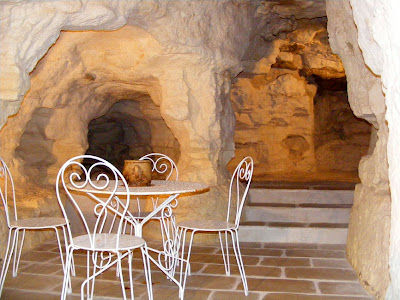 When we went over to see the horses, Sylvie's pregnant Selle Français mare, an Appaloosa, a Shetland pony, a donkey and a couple of colts were hanging about in the shade. Only a chestnut colt came over for a scratch, and the donkey remained resolutely asleep. The horses stay outside all year, only coming in to the stable if they are sick. I commented on how surprised I had been that horses in the UK spent so much time in stables. Sylvie agreed with me and said that she had noticed that English horse owners in the district seemed to keep their horses stabled or worse - rugged - even when the weather was warm, which we both felt was not good for the horses. Then, after hurriedly dissuading Sylvie from finding me a retired Percheron for the orchard, we went off to look at the other gîte.

The troglo gîte has a bread oven - great for making pizzas. 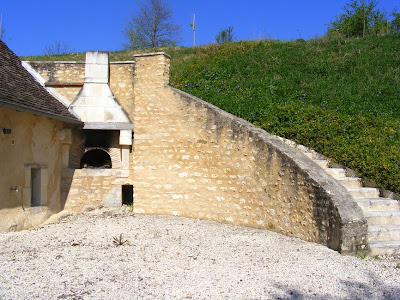 This one is next door to the marvellous Château de Châtelier, and is semi-troglo. It looks like a normal little house from the front, but once you get inside you realise it is a warren of caves carved into the rock. Amazingly, it also sleeps up to 10 (although I suspect is more comfortable for a maximum of 6) and has a wonderful roof terrace which looks out to the château and over the field where they currently pasture a quartet of young colts (the château farm is an anglo-arabian horse stud). Guests also get the use of the château swimming pool and can use the barque on the étang to go fishing.

The view is current marred by some power lines - but not for long.
They are scheduled to go underground in the autumn. 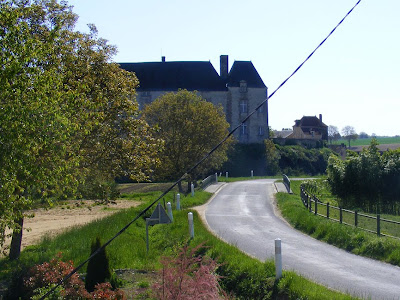 Both gîtes are in stunning locations and more peaceful and relaxing places would be hard to imagine. Nearby Paulmy is small, but home to the Bar de l'Union, which has regular live music. Les Amis du Châtelier also host concerts in a magnificent barn in the grounds of the château, and the part of the château complex can be booked for private functions.