Doing What Australians Do Best

What do Australians do best? Barbecue of course. It's a well known fact that Australians never eat indoors if they can eat outdoors and all Australians barbecue all their food every day. 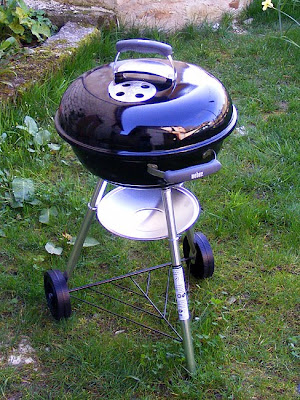 We haven't owned a barbecue for years, which was clearly a situation that needed rectifying if we were to maintain our status as true blue. Thanks to a generous birthday gift of cash from Simon's parents we have bought (amongst other things) a smallish Weber, from LeRoy Merlin, costing €79.

Simon put it together yesterday, and since it turned into a lovely warm day and fine balmy evening we decided to barbecue some chicken legs we had purchased the day before in ED for something like €3.50 / kg. Simon, being the bloke, was obviously in charge of the barbecue. He marinated the chicken in a mixture of soy sauce, sweet chilli sauce and a dash of balsamic vinegar. After a slow start with much worrying about how much charcoal was enough, he left the chicken under the dome to cook, along with a quartered green pepper.

The peppers went on at half time. 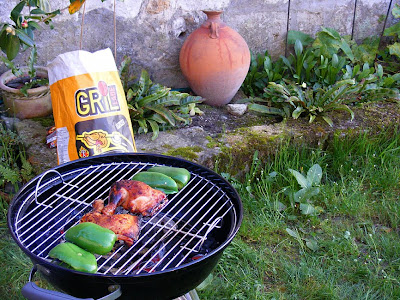 Being the sheila, I was in charge of salads. I had some home made Russian dressing already in the fridge, so I cooked some potatoes to make potato salad. Then I used my newly acquired vegetable spaghetti tool (purchased on Thursday from the Asia Store in Poitiers) to make strips of carrot and cucumber, dressed with a cumin spiced vinaigrette. I washed some oak-leaf lettuce and put out the slow roasted tomatoes I had made a few days earlier.

All piled on a plate. The drink is ginger syrup
(also from the Asia Store) and fizzy mineral water. 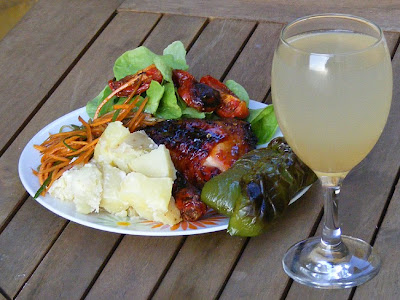 We sat outside in the coin d'apéro and watched the redstarts and bats catching their supper. The sky slowly turned from intense bright blue to pearly pink. It was magic.

Hi Susan, that looks and sounds really nice. Tell us more about the "vegetable spaghetti tool" — and about the Asia Store in Poitiers. And how did Simon get on with the French charbon de bois ?

Now you've made me 'homesick' for 'La Touraine'! Wish I could have been there ...

Looks superb Susan - The Weber, which is the type we have is used every year to cook the Turkey and/or Pork in. Does a great job, doesn't it.
Sheila - haven't heard that for awhile.
Leon

Have wondered what would it be
like to live in Australia
with my name.

Magic indeed. Weber is the best. It's so nice to see the weather improving so that you can make the most of it.

I wish I was in France, now that the weather is getting nice.

Sounds superb! Isn't it nice how some good weather just makes everything better? You should put up a pic of this vegetable spagetti tool--I'm curious as to how it works.
Antoinette

The vege spag tool is a type of small grater / mandoline that allows you to make long thin julienne shreds of vegetable like those used in many oriental salads.

The Asia Store is in avenue 8 mai. They had fresh okra for sale, and gombo powder (for when you want that extra slime, presumably :-)

Refering to women as sheilas is considered fairly uncouth these days in Australia.

Simon found the charbon didn't stay alight reliably until he put on about 3 times as much as the instructions suggested. Then it was fine.

Nice shiny barbie. Fancy lookin' grub. All yer missin' is yer proper beer and the mozzies. Glad you have a little patch of Australia in your backyard. Enjoy the nice weather.

Kirstie: Actually we did have proper beer (i.e. Belgian, not your Australian rubbish :-) Too early for mozzies yet, but they will come.