It feels like spring has arrived: we had our second BBQ of the year yesterday (pork chops this time, with grilled asparagus for Susan), things are growing in the garden (mainly garlic and onions, but the beans and peas are starting to show serious intent), and we have had all the windows open and are in a painting frenzy. 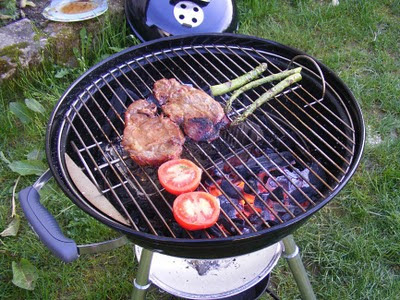 My parents will be visiting us this summer - they were last here in June 2007, before we had started work on the house. While they were here they helped me strip out the old lambris (the wooden panel stuff seen on the left in this picture) so they will certainly notice some difference, and we hope by the time they arrive there will be even more difference to notice. Hence the painting frenzy. 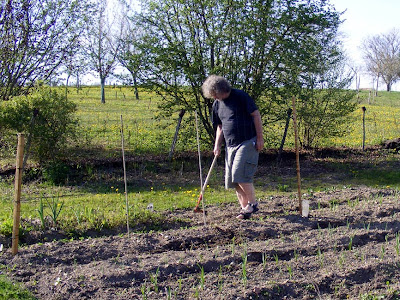 Another task that was done in June 2007 was weeding the back garden. This meant my mother and Susan chipping out every last strand of bitey things. As bramble and nettles were the only thing growing in the garden this was quite a task, and one that everybody involved thought would be only temporarily sucessful. Luckily were were wrong, and the garden has just about stayed under control. 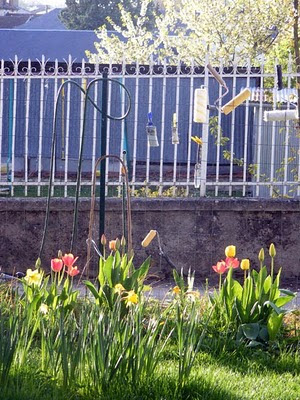 Today I take a break from painting the attic bathroom - the undercoat takes 2-3 days to cure. That gives me time to paint the office window and window ledge we put in last year.

Oh, the joy of tulips!

Call that a barbecue? Where's the gas bottle? The electric rotisserie? The plate warmer? That's what the big boys use!

Thought I could something burning wafting our way ;-)
Antoinette

Antionette. How very dare you!! I was caramelising the collagens