Drowning in the Loire: how to warn of the danger?

This post is a straight translation of an article in the Nouvelle République of 16 August 2012. There has been an average of 3 drownings a day in France this summer - a figure that has shocked everyone. Note that swimming in the Loire at Amboise and a number of other places is banned. In the midst of the current heatwave, with temperatures up to 38C (100F) it is often all too tempting to go swimming in unsupervised or deceptively enticing rivers.

After the drowning of a 10 year old boy on Monday in the Loire at Amboise it seems wise to recall the dangers of a river which is calm only on the surface.

The pompiers train in river rescue at Amboise
last October. We wrote about it here. 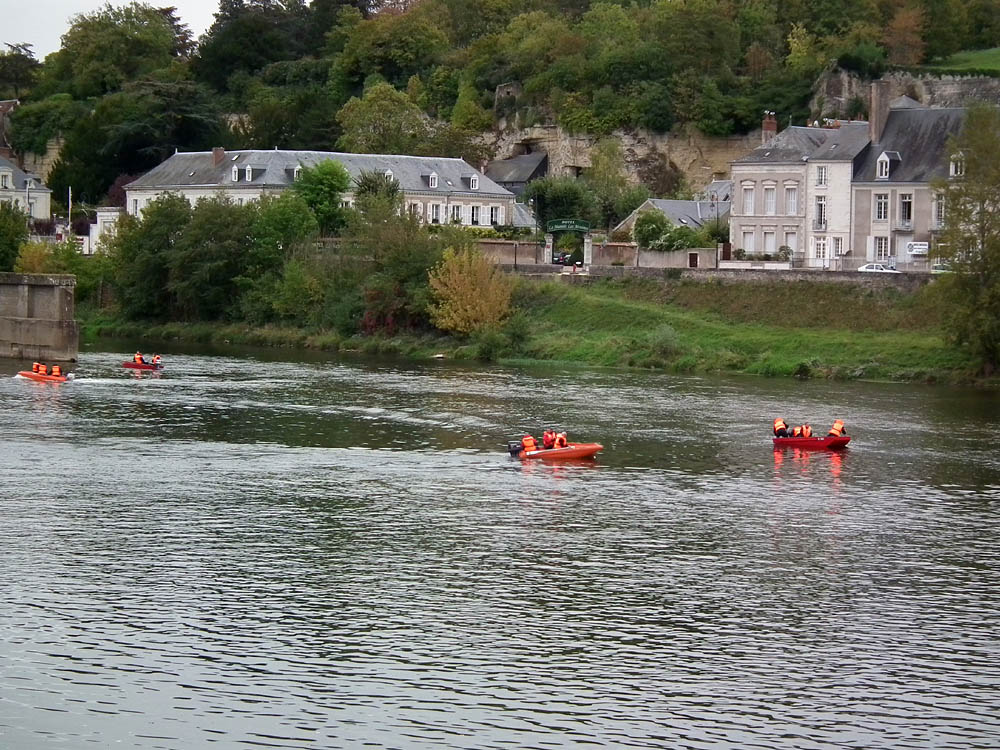 The Loire is not a long tranquil river. Nevertheless, many tourists, not to mention local residents, do not hesitate to go swimming there. 'There's no county regulation to forbid bathing, but the town councils make the regulations,' explained an official at the prefecture (county hall). In fact, a county regulation was withdrawn in 2007, and from then on, the communes (town councils) such as Amboise, took on the swimming regulations.

Don't be fooled by its benign and picturesque appearance... 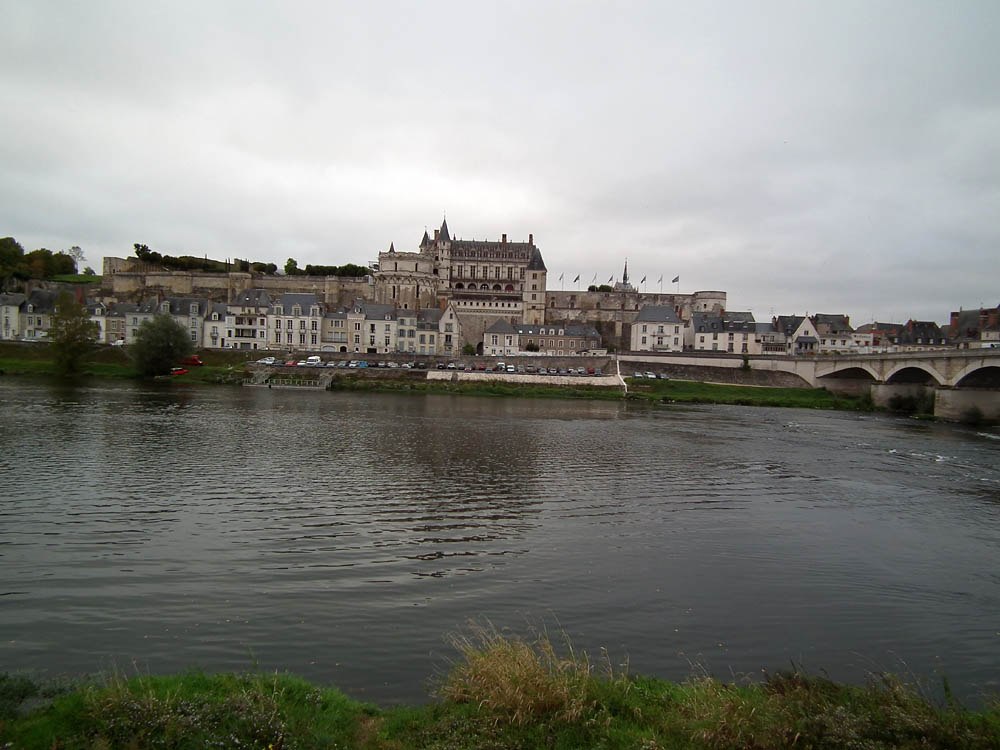 'We are not hydro-engineers, but our team of officers knows the landscape and the dynamic of the river,' commented Thierry, from the Montlouis Loire Centre. 'The Loire is a living creature, dangerous, with two major elements to consider - water and sand. But the main problem is that the swimmers are not aware of the danger, rendering themselves vulnerable,' further explained the officer. Swimming in a river is not the same as swimming in a pool. 'The water is deep, you can have a thermic shock, you quickly lose reference points and landmarks, there is a strong current and when you are tired there is a tendancy to fight it rather than let it carry you along.' Panic and emotional shock only serve to accentuate the risks.

The pompiers (fire brigade) are the lead emergency service here. 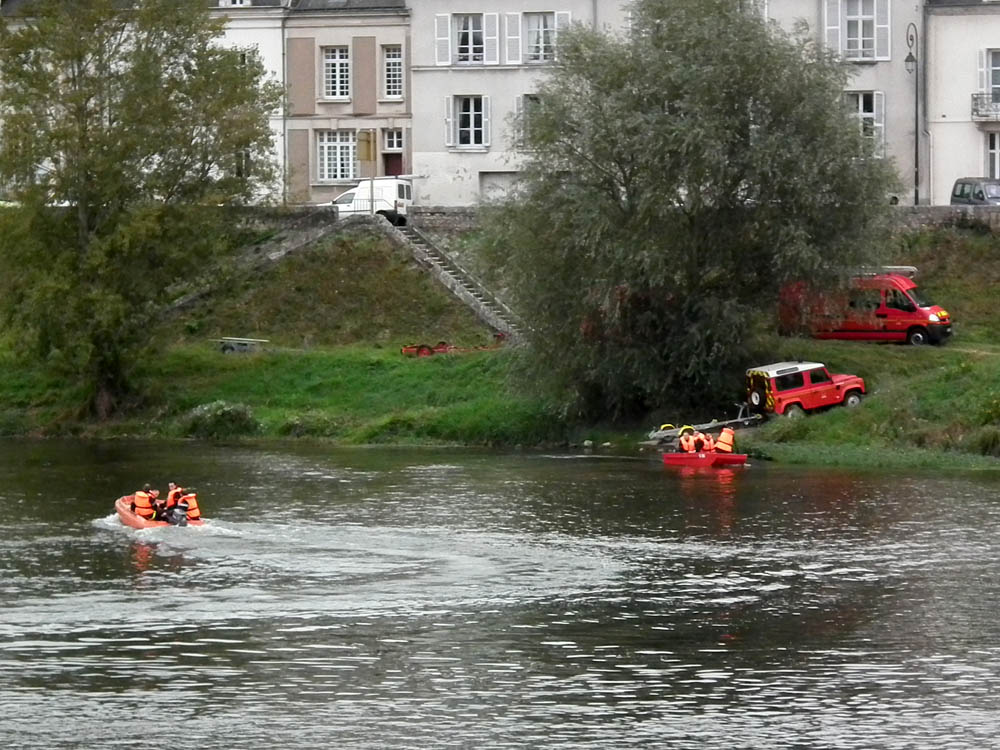 The Loire has great variation in terms of depth and water levels. Then there is the problem of quicksand, which forms according to the currents, uncompacted and with uneven, unstable edges. 'These are not shifting sands like you often hear of. In fact, you walk a bit through the water, it seems solid underfoot, and when you get to the uneven bit, the sand collapses and you are carried with it.' Thierry underlined the point, 'Familiarity breeds contempt. So many people say to us that they have swum in the river for decades and know the river well,' he said ruefully. In addition, the other big danger which catches out swimmers are whirlpools caused by the piles of the bridges or obstacles in the middle of the river.

Shocked by the drama of Monday, the people of Amboise asked if the municipal police can't intervene when there are swimmers. 'Indeed, they can do so, and just last week were making people get out,' explained the mayor, Christian Guyon. Next to Nazelles-Négron there are campervans which come down right to the edge of the beach for the night and the occupants take advantage of being able to swim. 'We have to inform and educate the tourists,' explained a resident. Monday, with the drama unfolding only a few hundred metres from them, there were still swimmers around Amboise. Upstream from the bridge you could also spot people up on boards, paddle in hand, without a life jacket.Original article in French by Pascal Laurent.

I'd appreciate it if our bilingual readers with the time and inclination could check my translation please. The comment about the shifting sands didn't quite make sense to me for instance. Newspaper articles are always difficult to translate well as there always seems to be so much assumed knowledge and detail left out.
The point of the article is clear though: the sand underfoot and the currents in the stream are treacherous in rivers. They are dangerous places to swim unless you are at a clearly designated swimming spot. If you are engaged in any sort of boating activity, for goodness sake wear a lifejacket. And never leave children unsupervised around water.

I know only to well. My cousin was drowned swimming in the river Ribble. He was only 18 and was a good swimmer. A very good warning Col

Susan, "sables mouvants" are quicksand. The writer says it's a myth that there are patches of quicksand in the Loire, but there are unstable piles of sand a gravel washed up by river currents that can collapse underfoot and send you into deep running water. See an old post of mine here — at the end there's a photo of a sign warning about quicksand near the Cher at Saint-Aignan.

"Familiarity breeds contempt" doesn't seem to fit the context. "People are lulled into complacency by believing they know everything about the river" and so they take risks when they shouldn't.

Your translation of the article is good.

The repercussions of a drowning tragedy go far beyond the event.

Ken: many thanks. You've picked up on the two sections I was least happy with.

It is worth noting that the little boy who drowned was not a tourist, but from Tours.

I agree with Ken, your translation is good. There are only two points. The French says, “L’eau est foncée, il peut y avoir un choc thermique [...].” L’eau est foncée means the water is dark as opposed to clear or limpid. The other point is, “Et puis, il y a ce problème des «culs de grève» ou sables d'éboulements qui s'amoncellent en fonction des courants [...]. I think “culs de grève” mean screes — even though I’m not familiar with this English word — where parts of the banks of the river have collapsed. There is no quicksand [sables mouvants] involved here; that’s what the man said.

I must commend you and Simon for the variety of interesting and educational subject matter you tackle every day.

Also, the French writers uses the term "dénivelés", which are what we called "drop-offs" in North Carolina. The depth changes suddenly so with one step you can find yourself in over your head.

Cool flowing water is so tempting... Most of the drownings still happen in private swimming pools though. There was another NR article about this recently. The law is, for a ground level pool, there must be a splash alarm or a cover. With an alarm, it starts to sound off when the wind blows and the water gets a little choppy, so the owner switches it off. With a cover, it's a nuisance to have to keep opening and closing it, so the owner leaves it open. Or it leaves some way for a tot to get under it and into the water.

chm: for some reason I interpreted foncée as deep, not dark, but of course you are right. I looked up cul de greves when I did the translation and was none the wiser. I can't think of an English equivalent - gravel banks is the best I can come up with. I have a feeling there is a proper word for this formation, but can't think of it. It isn't scree, as that is not associated with rivers and water. Scree is what you get on the sides of mountains in Wales where they mine slate. It's loose material on the lower parts of a steep slope.

PG: Given what a pain private pools are from whichever way you look at them, I have long been puzzled as to why anyone would install one.

Eau foncée : I'm wondering what we would say in English. There's the expression "black water" but that's usually water in a swamp or bayou. I think we would just say that the water is not clear — you can't see the bottom. Dark or deep, the result is the same.

I found this for "cul de grèves" :

I think the technical term for these phenomena (cul de grèves, éboulements, etc.) might be "alluvium" or "alluvial deposits."

I agree with Ken, the translation for foncée [dark] is murky because of the sediments presents or in suspension in the water. It doesn’t mean it is deep. What the man implies is that you cannot see where you put your feet, and that’s the danger.