V is for Vibraye 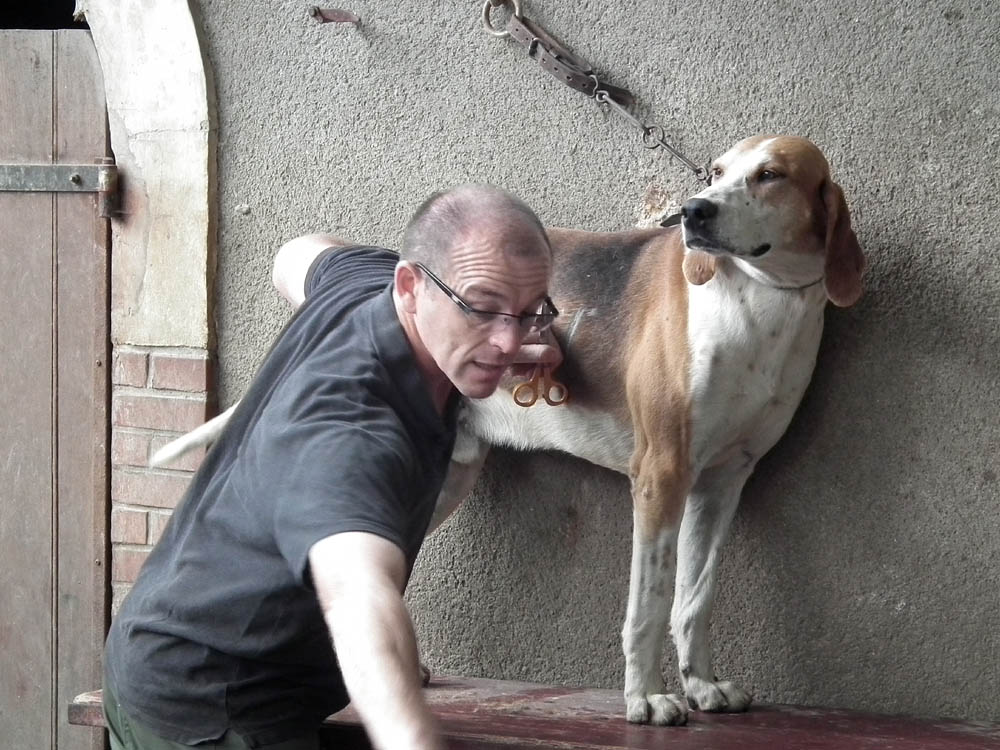 On a recent visit to Cheverny with clients we discovered we were in for a treat. The kennelman was in with the hounds and preparing to clip them. Whenever the hounds go out working they have a V clipped into the hair on their flanks. This is to identify them as belonging to the Cheverny pack (V stands for Vibraye, the family at Cheverny's title - they are the Marquis de Vibraye). If a hound is somehow separated from the pack in the field, anyone who finds it will know who to contact so the dog can be restored to its owners. 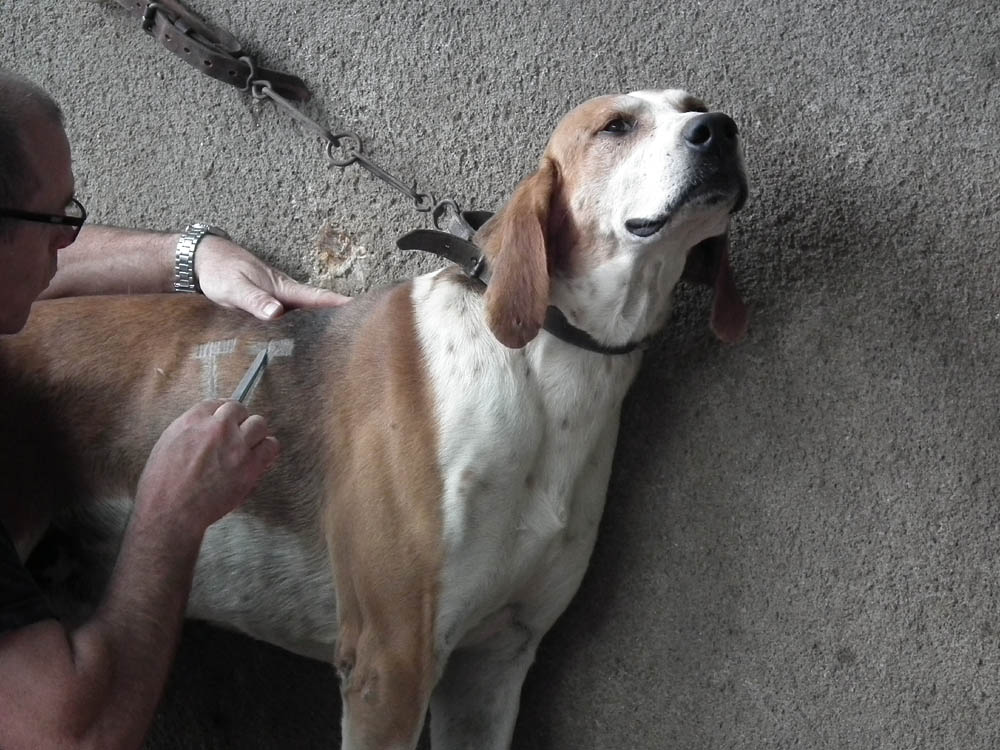 We were fascinated to discover that the V is created by neatly snipping the hair with scissors. I'm not surprised to find they don't use an electric buzz cut razor, as I imagine the potential for sending the dogs wild is fairly high. I had assumed the V was formed by using a stencil and manual clippers or razor though. In fact it is done freehand, although that hand is clearly so experienced it could do it on autopilot by the look of it. 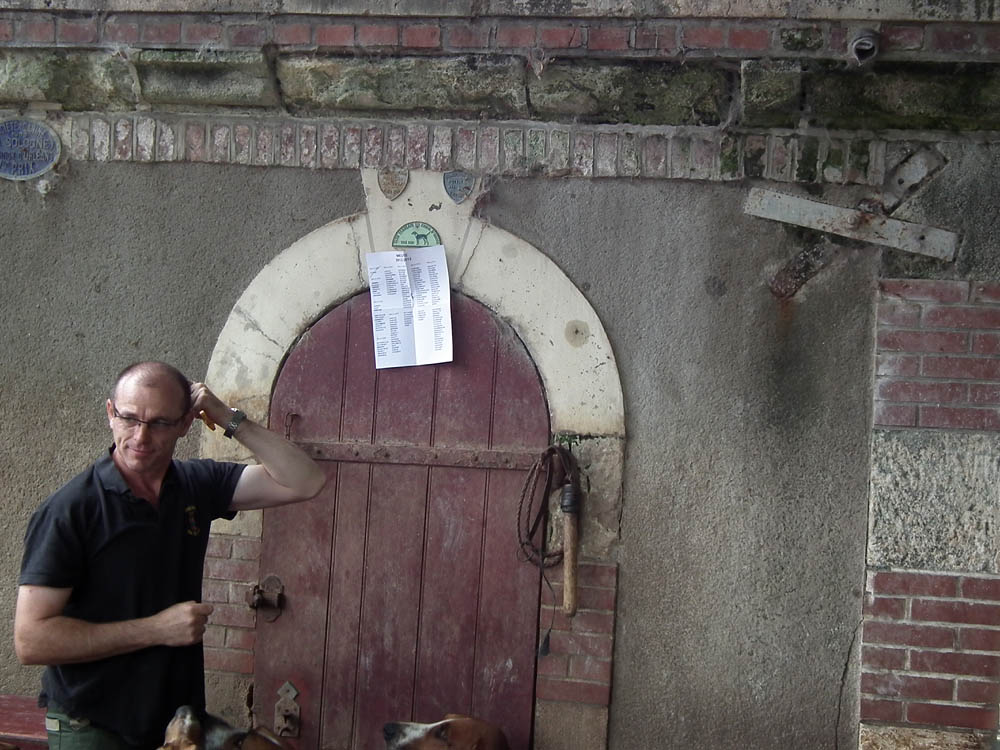 After the initial excitement of greeting the kennelman, the dogs split into two groups. One group, obviously the cooler more laid back types, arranged themselves in comfortable piles along the front wall of the yard and relaxed. Others, presumably the teacher's pet types, trying to ingratiate themselves and draw attention to themselves (sir! sir! pick me! pick me!...) swarmed about behind him, pushing and shoving. It wouldn't have done any good, as he had a list, which he pinned to the door, crossing off each dog as he finished with it and looking around for the next one, calling it up by name. 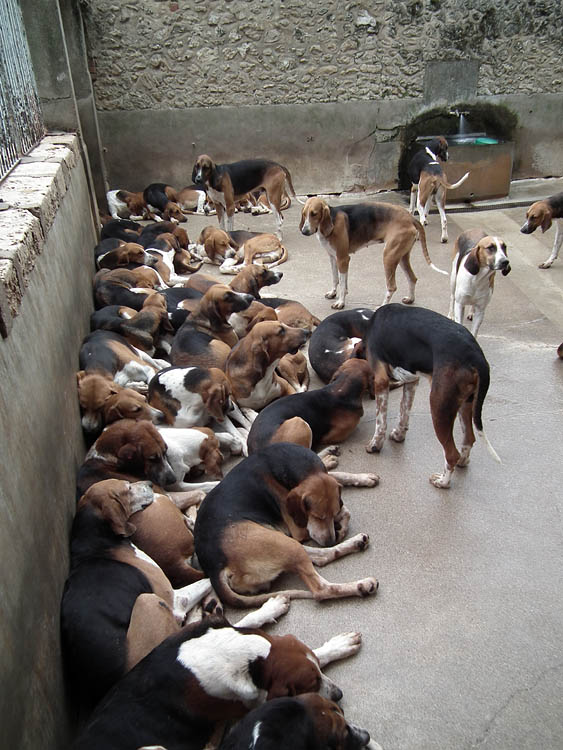 The dogs all have names, and the kennelman recognises each of them and knows their name, every dog born in the same year having a name starting with the same letter. Whenever he is in the kennel yard they jostle for position to get close to him and if there is any socially unacceptable behaviour from them, a word from him stops it instantly. Several times he had to tell the dogs standing behind him not to push so much. 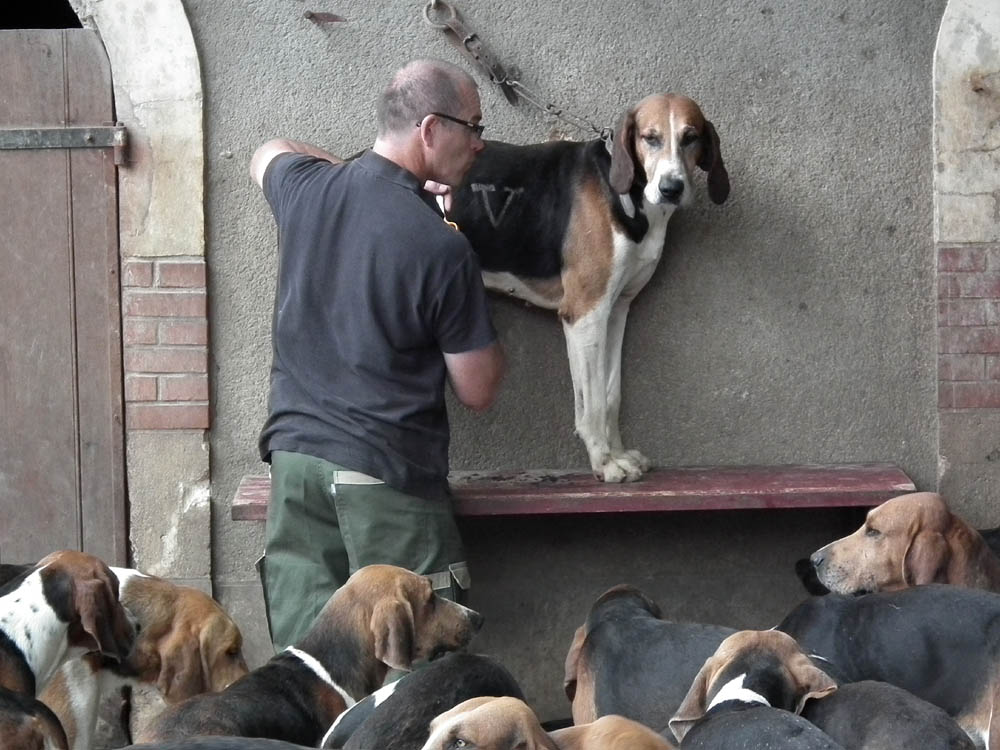 When he lifted a dog onto the bench he quickly checked its condition, running his hands over it and lifting the skin along the spine and looking into its ears, speaking to the dog indiviually all the while. Once clipping commenced the dog stood there, blissed out. Occasionally it would turn its head, which was firmly put back into the forward position. The clipping is obviously deliciously tickly and the dogs love it.

Dogs are pack animals and the kennelman has clearly established HE is pack leader... Basic dog training if you want to get any dog to behave.

I wonder how much of the excitement is conditioned by the fact that they associate the clipping with getting out of the pound!

PG: I'm guessing the excitement is caused by the presence of the kennelman and the association they will make that he means some action coming their way. I suspect there isn't a direct connection of clipping to gettting out.

They are no doubt delighted to
greet their real "alpha dog."
A talent to lead some people
seem to have in their genes
just as the dogs carry some
traits forward.

I love the second picture - that dog has a kingliness pose

Serendipity, right place, right time, How nice to be able to witness such a ritual.A little insight into the daily workings of the place.
Another snippet to add to your already wonderful, interesting narratives for Celestine's tour guests.

Beaver: I think you will find the dog was in a little world of it's own :-)

Margaret: Indeed - it's a shame not everyone will get to see it though.