A Different Sort of Phylloxera Cross

When you look up 'croix de Phylloxera' on the internet what you get are a load of entries about Christian crosses erected during the time of the Phylloxera crisis in the late 19th century. Phylloxera is a North American root aphid that attacks the vines. It was accidentally introduced on American vine stock and almost wiped out the French wine industry its effects were so widespread. A large cash prize was offered to anyone who could eradicate the pest, but it has never been claimed. In the end, after much trial and error, a resistant American vine which tolerated French soil was identified and French varieties of vine grafted onto this new rootstock. 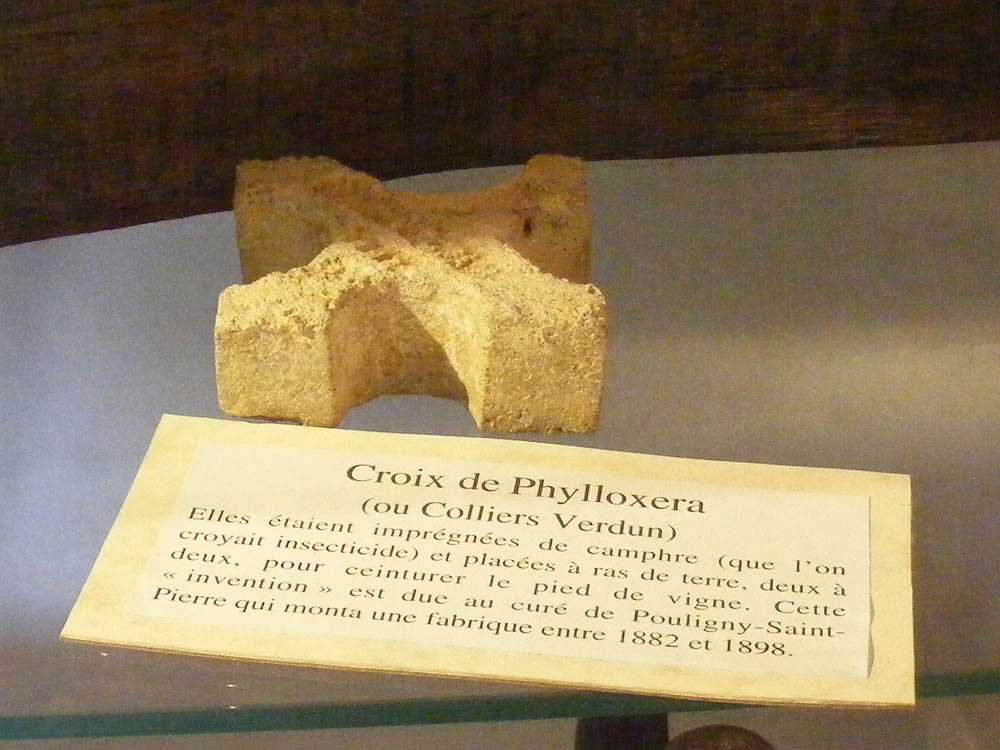 In the museum at Preuilly there is a small object called a croix de Phylloxera, but it is quite different to the sort of wayside cross with inscription imploring God to help that comes up in searches. Since I can find out no more about it, I am restricted to telling you what the museum card says:

Croix de Phylloxera (or Verdun Necklace). They were impregnated with camphor (which was believed to be an insecticide) and placed at ground level in pairs to encircle the base of the vine. They were 'invented' by the priest at Pouligny-Saint-Pierre, who ran a factory manufacturing them from 1882 - 1898.

All museums have their share of these quirky and obscure little objects. The only way of keeping their history alive is to make sure the stories are recorded while they are still within living memory. Small locally focused museums can be just as good at doing this as the great national institutions, but they are totally reliant on the community for their success. It's a credit to the local archaeological society that Preuilly's museum has some real treasures and genuinely sheds light on past times.

Email ThisBlogThis!Share to TwitterShare to FacebookShare to Pinterest
Labels: Food and Drink, Pictures of Preuilly, Towns and Villages near Preuilly

It also attacked thew Australian vineyards however there are some vines that survived at the Tahbilk vineyard in the north of Victoria.
These were the Marsanne variety.
Leon

I've seen a display of those things somewhere before - maybe Bossée sur Claise or Le Blanc? Both museums well worth a visit.

PG: Le Blanc is likely - Pouligny is closer to there I think. I didn't know Bossay had a museum.