We have been blogging for 6 years (this was our first ever post), and in that time we have had two redesigns. Mainly the redesigns have come about as people bought bigger and bigger monitors, and so were able to see a wider picture. For ages our format was very narrow because certain people (including those for whom we originally started the blog) were looking at it on an 800x600 monitor. The layout was a modified version of Rounders 4, which stayed in one form or another until November 2008.

In January 2007 we dropped the very basic layout we had (luckily there is no record of that at all, but if memory serves correct there was no picture at the top, just a big "Days on the Claise" in text) and put a picture at the top. Because size was an issue it was a very small picture:

In November 2008 we went for a wider and bolder layout, with a lot more coding input from me. We didn't change the colours too much (the day we did we scared too many people!)

I saved this image of the blog on the day the number
of visitors reached the same as our post code. 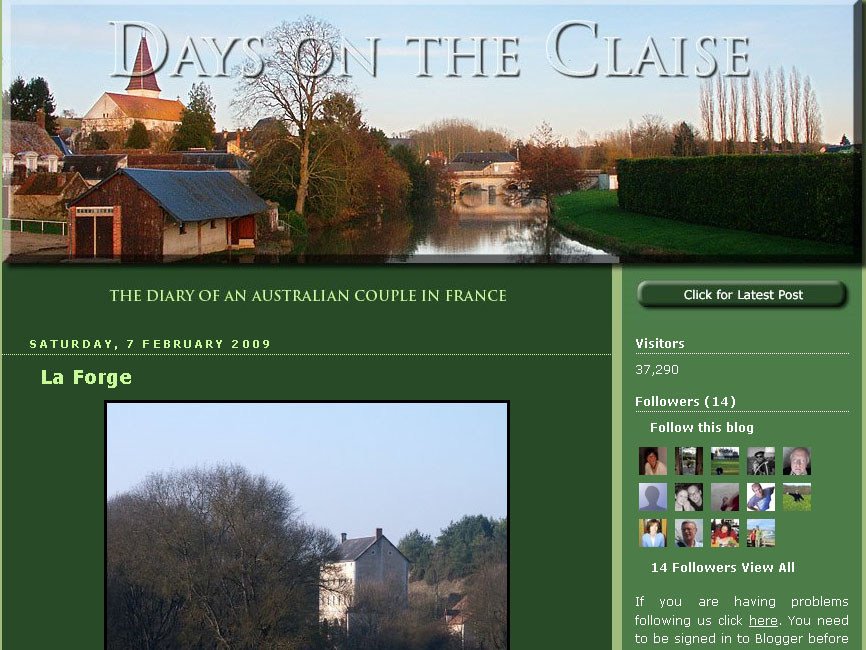 This is how it more or less has stayed: we have rejigged the shape of the picture at the top (and changed the picture itself many times), but the colours and general layout have stayed the same. 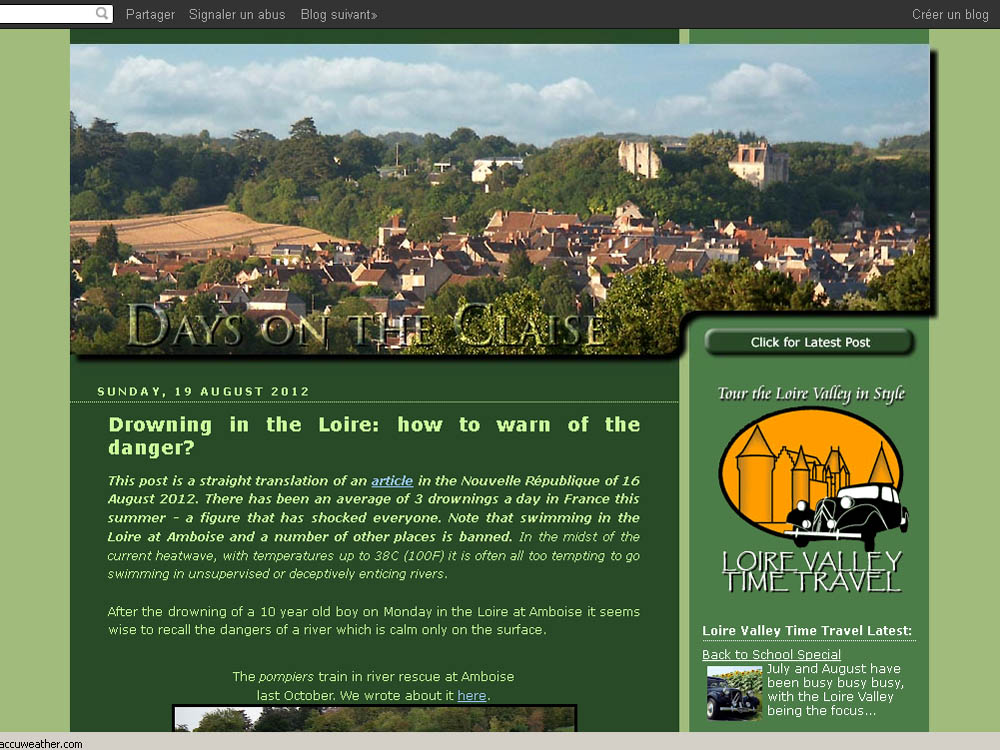 I hope the new layout is legible on whatever machine you are using to look at it, and that the bigger photos give you a better look into our lives. Don't forget you can always click on the photo to see it full size.

Hi S & S.
I noticed in the top picture, that a lot of the houses have very steep roofs, I always assumed it was to deal with bad snow fall, did your area have lots of snow in the old days, or is it just how they were built following tradition from colder parts of the country ?

I like the dark green background and think the white writing reads better against it. I also like the framing of the header photograph.

It reads fine to me - even without my reading glasses!

[1] The most recent header style was much nicer than the "picture cornered" one you've just come up with. You could have dropped the "Click for latest post" and tucked the "Tour the Loire Valley in Style" into that position... it seems to have 'lost' position as it stands now.

[2] I agree with Gaynor that the white on dk. green reads better; much better... and I think that the 'muddier' green for the side column and its paler shade for the background work very well... they 'punch' the blog column to the foreground very well.

[3] Possibly put a bit more white into the sidebar colour? The non-bold black text is not as easy to read as the bluey-purple non-visited and creamy visited links text are. The bold black text [Members (103)] is very clear.

But I hope you are too busy to play around with it until the winter... how's "La Dame Noire" taking this heat?

looks good and works well from this wee laptop.

It does look better but I prefered your original (clever) font for the title.