On 11 August the Association de botanique et mycologie de Ste-Maure-de-Touraine had an outing to the woods around the Chapelle du Liget to see a very rare orchid that grows there. The Violet Helleborine Epipactis purpurata is on the western edge of its range here and is a very rare orchid in France and the surrounding countries to the north and east. 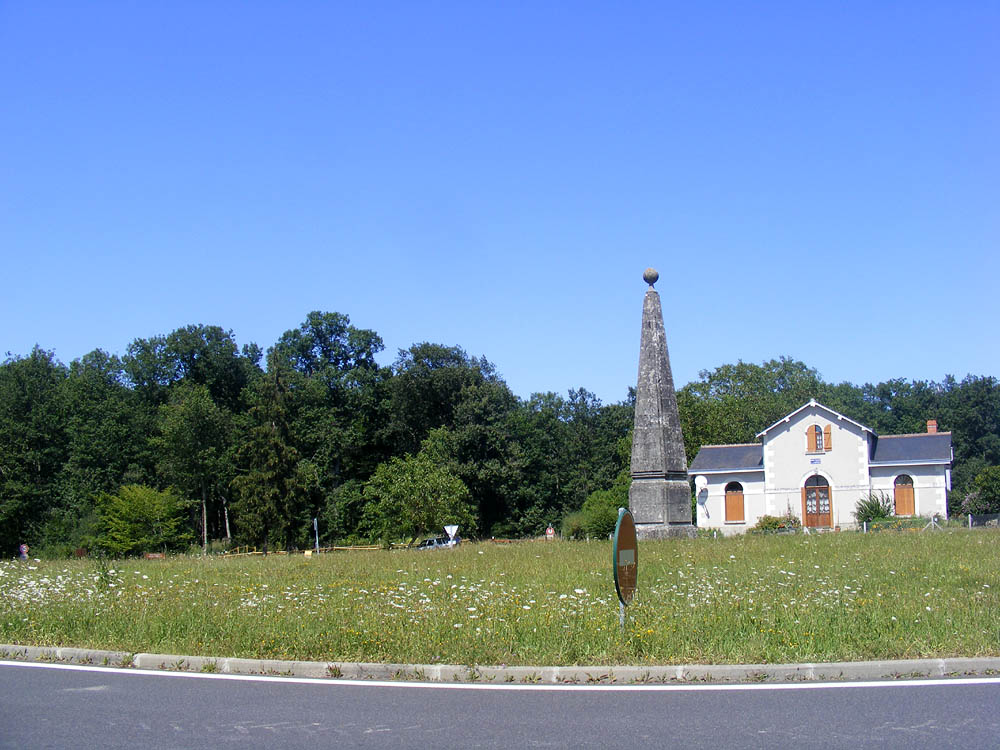 The meeting point was the Pyramide de Chartreux, on the D760 intersection with the route forestière Georges-d'Amboise. Four of these waymarking 'pyramids' in the Forest of Loches exist, at the major intersections of the old forest trails, now become roads. They help hunters and other forest users to orient themselves when deep within the forest. Each of the 'pyramids' is a slightly different design, so you can be in no doubt as to your whereabouts. (They are all known as pyramides but technically they are not pyramids because they sit on bases. Strictly speaking they are obelisks.) Niall and Antoinette have written about them more fully over on Chez Charnizay. The Pyramide de Chartreux sits in front of the old Hunters Lodge, now a private home. 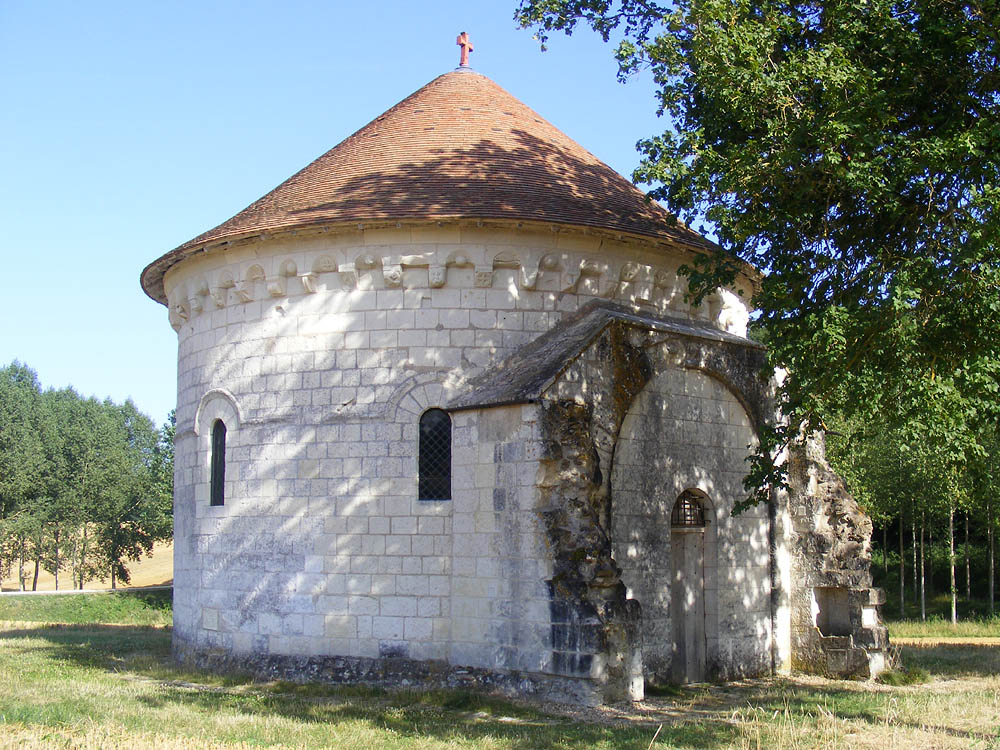 Once everyone had rolled up we drove down the road a kilometre or so to the Chapelle du Liget. The Chapelle is a neat round little building in a large clearing that this year was used to grow a crop of wheat. Now harvested, the stubble gives a lovely golden glow to the chapel surrounds. It's all locked up and you can't get inside if you just turn up, but if you want to see the recently conserved wallpaintings that decorate the interior you can ask for the key at the Loches Tourist Office. Once again, Niall and Antoinette at Chez Charnizay have much more information, and have visited when it was open. 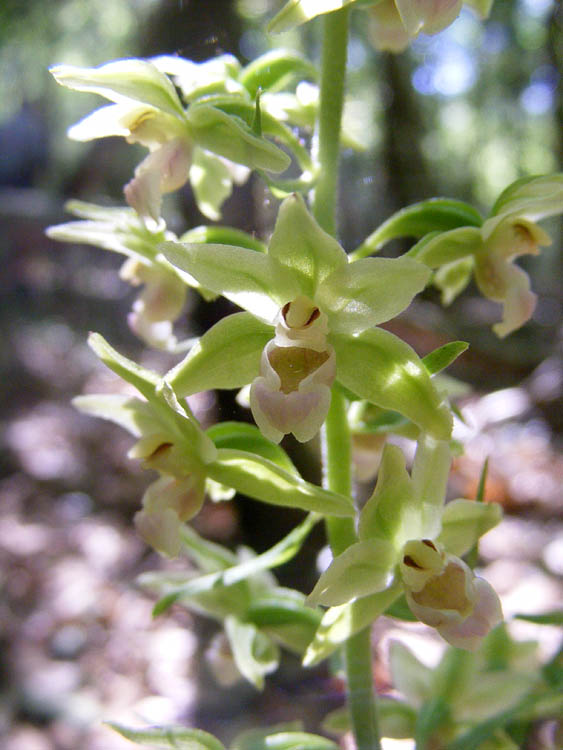 Marc Fleury, our orchid expert, had brought along some Broad-leafed Helleborines Epipactis helleborine to demonstrate the typical Epipactis features that we were looking for. I think he has picked up how shocked I am that he takes samples like this, and was quick to point out that he only uses plants which do not have protected status. After this quick primer we walked along the designated path deep into the woods, then Marc dived off piste to the left. He pointed out a Bird's-nest Orchid, which he said the Violet Helleborine often grows with. Here in the Touraine, the Violet Helleborine seems to favour pockets of somewhat calcareous soil, although in other places it is found in slightly acid locations. In the forest, mounds of raised earth can indicate more limestone in the soil, so we concentrated the search on these bumps. The orchid likes heavy, but not total shade, growing out of the cool soil under the leaf litter of mixed oak / beech forest, to a height of 30 - 70 cm with many large (for a European terrestrial orchid) flowers on a spike. The low light made them very difficult to photograph well when we did find a colony. The plants here are quite pale compared to many places, where they have a strong purple flush over the whole plant - flowers, stems and leaves.

The woodland floor where the orchids grow. 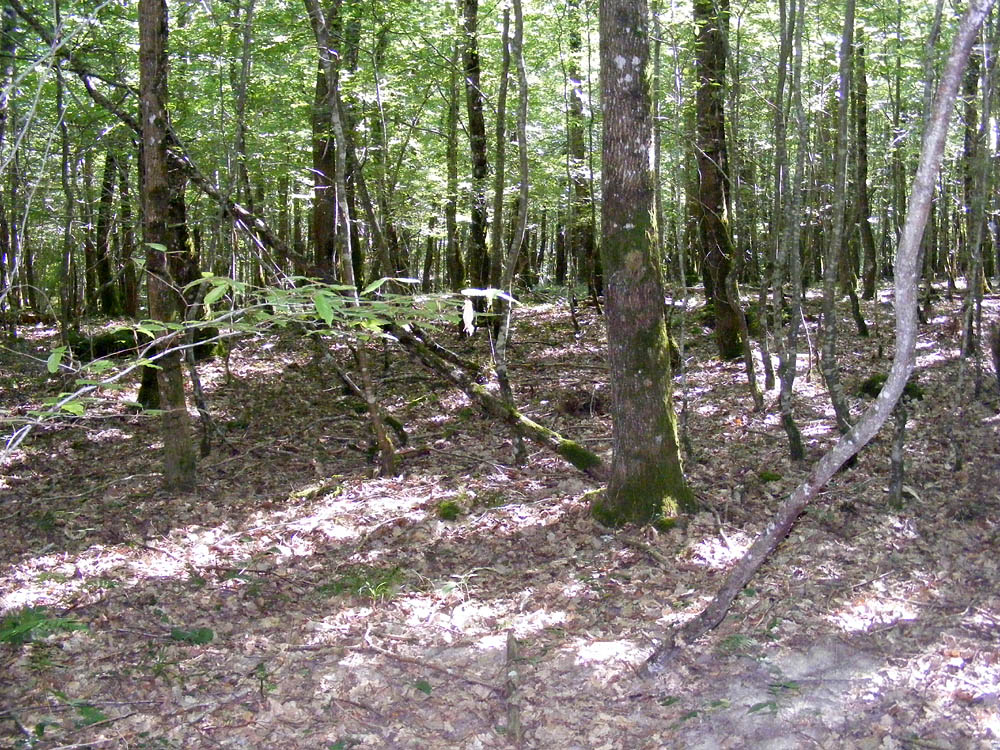 Along the way we also noted the fungi, finding a number ranging from a deadly species to the most prized edible species of all. Apparently the club is planning to return later in the year, to focus on fungi. Jeannine our secretary has been corresponding with the National Office for Forests, who manage the Forest of Loches, to advise them of our activities. In the past this has just been a courteous formality, but to her surprise this time the ONF (Office national des forets) has gone all officious on her and demanded a complete outline of our schedule for the second half of the year. My impression is that the main concern of the forestry officer in question is the hunt and the possibility of us disturbing game. Jeannine is not impressed.

Midwife Toad, male and 3cm at most from nose to rump. 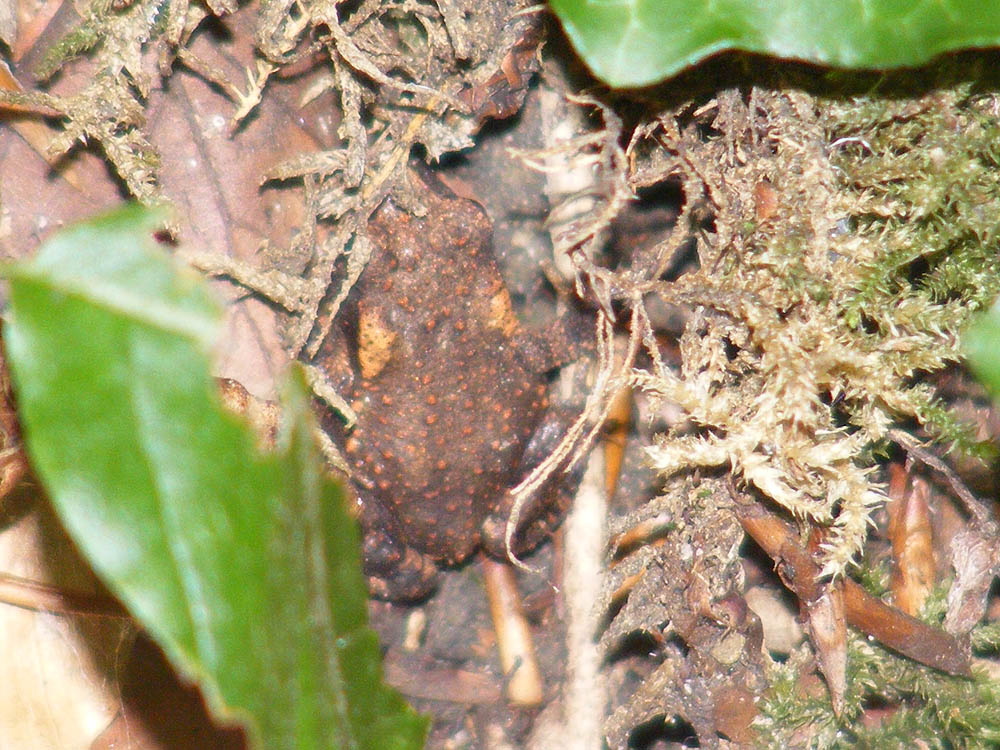 On our way back through the forest we came across an old quarry, probably where the stone for the chapel was extracted. Horseriders obviously use the paths here and in a deep hoofprint in a muddy patch I noticed some movement. I managed to get a few poor photos of the tiny toad which was in the process of crossing the path, and only later realised that this was my first sighting of a Midwife Toad Alytes obstetricans! You can hear their delightful tinkling call almost any night from March to October if you stand outside our house, but I have never before seen this elusive amphibian (you can play a recording of their call on HerpFrance).

Naturally, we rounded off the outing in traditional style, with drinks all round of Marc's homemade cider (we are on the 2011 vintage now apparently). He commented that he is starting to have trouble with the sanglier coming in to his orchard - presumably for the windfall apples. After relaxing and chatting for a while, we took ourselves home.

What did I say about the gift of identification...

Wouldn't you love to see those
toads mating. The males must be
quite a sight with all those eggs
attached to them.

Too bad there isn't some official
propagating program for those
rare orchids, just as animals
facing extinction are protected
so they can reproduce. I realize
they are protected, but perhaps
they could use some help with
establishing themselves in other
favorable areas.

What a stunning plant! A joy to see!

That is a really lovely orchid and nice pic of the chapelle too :-).