Every year I discover at least one new, unusual and mega delicious pear recipe. Earlier this year my blogging vegan Canadian poet acquaintance Pearl Pirie wrote about making glazed pears for Valentines day. When I looked up the recipe she had used I was really put off by the hokey down home style the Modern Mrs Cleaver has adopted, and nearly didn't try the recipe myself. However, they looked fantastic so I waded through the cute asides and discovered a sensational pear dish.

I only wanted to cook 2 pears, so I more or less halved the recipe, reducing the spices so I could be sure they wouldn't overpower. For a pair of pears you will need 200 ml red wine (I used gamay), half a cup of sugar, 1 - 2 tbsp lemon juice and a strip of lemon rind, 2 wings off a star anise seed pod, a quarter teaspoon of cinnamon powder or half a cinnamon stick, a generous teaspoon of vanilla extract or a vanilla pod. The mixture smells divine once heated and lingers well after you've finished glazing the pears. The liquid turns into a glaze that can be spooned over the fruit every few minutes for a rich almost toffee'd look - and the taste is superb! 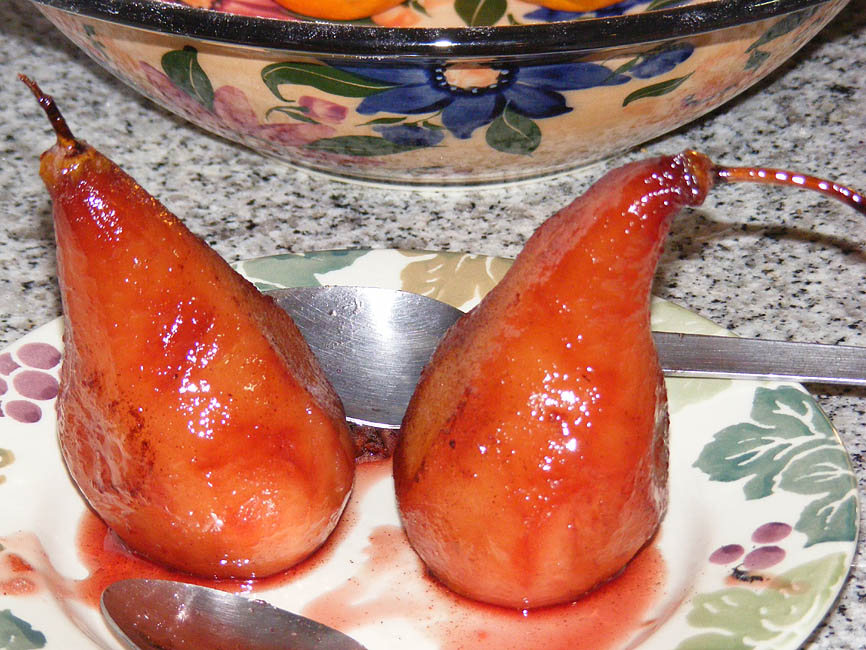 I cored the pears as instructed, which has the advantage that the glaze liquid can penetrate inside the pear, and makes eating it more straightforward. However, it does mean the pears lose strength and are prone to falling over in the custard when served, which is a bit sad. Do take the time to make a proper custard from scratch, with egg yolks and infused vanilla pod, although not necessarily the recipe that the Modern Mrs Cleaver provides (which works well, but is a bit aerated for my tastes - I like my custard smooth but not moussy).

As Jean of Baking in Franglais would say, the faff factor is *** (quite fiddly but definitely worth it).

My mouth is watering! I can imagine the aroma. Our pear trees have not produced at all this year, but les Vergers de la Garonne do some lovely pears.

I've always done poached pears in a very similar way. In NL it is a very trad recipe "stoof peertjes". I often used 75%red wine/25% red currant juice which gives the pears a very deep ruby colour which is great--especially at Christmas.

PG: One of my pear trees has produced quite a few little pears, but no doubt les VdlG will be called upon too.

Antoinette: Good tip - I will try it if I remember and can get red currant juice.

Try making it with white wine and cardamoms....

Fly: another good tip, thanks! I'll try that too.

Use sparkling Vouvray or Saumur ! It is something