With the pressure on natural environments from modern farming, roadsides are becoming more and more significant as repositories for certain sorts of wildflowers. Almost all of the substantial colonies of Early Purple Orchids in Indre et Loire, for instance, are to be found on roadside verges. Other plants, such as the gorgeous intense blue Meadow Clary, are declining and more and more dependent on the relatively stable environment of grassy roadside banks.

'Protect the flora on the roadside' 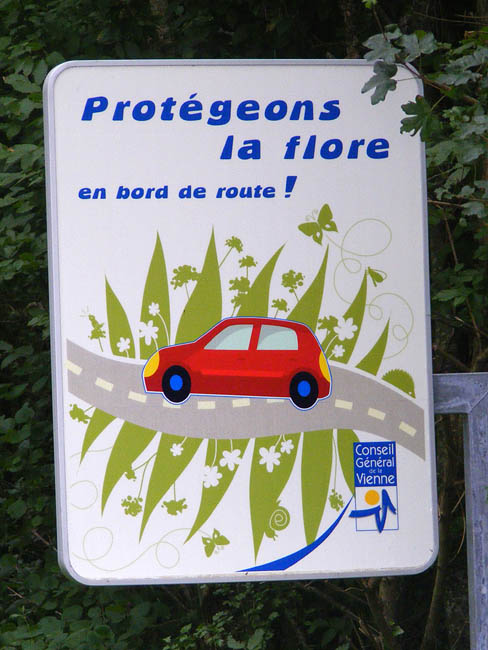 It is the plants associated with prairie habitats that are most affected. Prairies are rough natural grassland, traditionally used as cattle pasture. Many of the wildflowers associated with this grassland are now rare and protected. Modern farming has either ploughed the prairie up to plant cereal crops, or 'improved' the pasture by sowing more nutritious grass mixes so they can send the stocking rate up. Either way the wildflowers are ousted to the margins. In addition, modern farmland is over fertilised as far as the native flora is concerned. Roadsides tend to remain poorer in terms of fertility, although still not natural, as car exhausts provide a lot of extra nitrogen.

Since 2008 the Conseils généraux (local authorities) of the départements (counties or shires) around us have been modifying their roadside mowing in order to encourage and protect the more delicate and vulnerable of these prairie wildflowers. Likewise, these plants need undisturbed soil, so their presence has to be taken into account when doing any heavy roadworks.

No I didn't park on the roadside to take this photo... 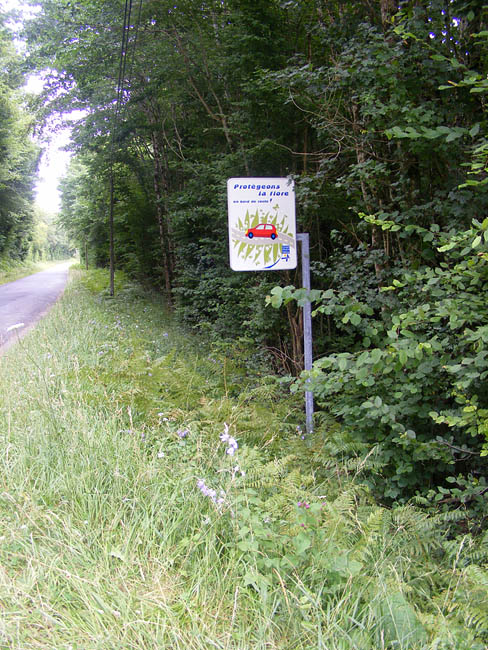 The département of Vienne has chosen 20 stretches of departmental road to erect signs warning motorists to stay off the roadsides to protect the flora. The blurb produced by the Regional Environment Observatory rather tartly advises that 'it is not worth slowing down to try to see the flowers - they are mostly very discreet and sometimes difficult to see, even if you are on foot!' They suggest that if you want to see the plants up close you have to go on an outing organised by Vienne Nature or one of their partners.

'Intelligent mowing' is practiced in the Foret de Preuilly. 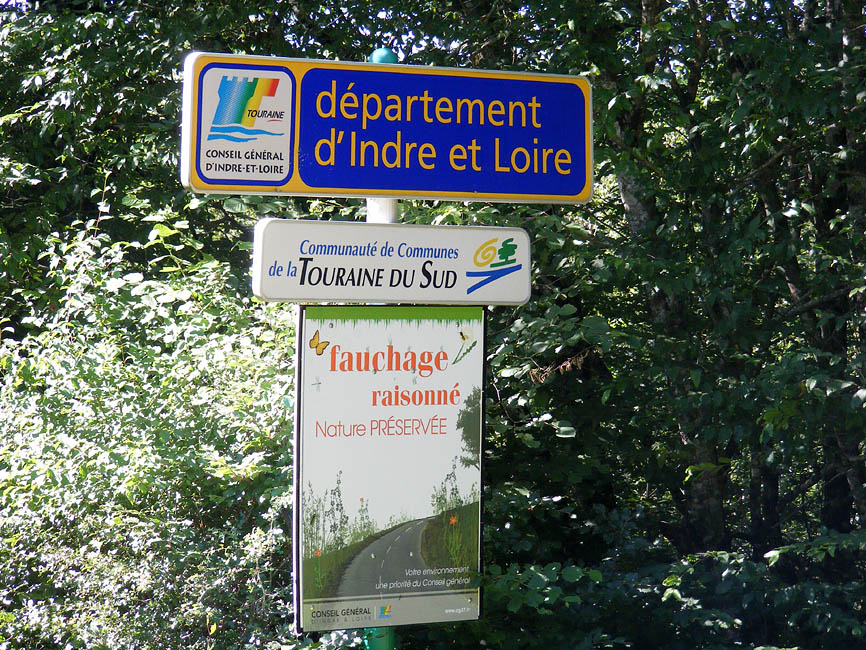 In Indre et Loire the signs announce that the Conseil général will be engaged in 'Intelligent Mowing' to preserve nature and Indre's signs say they are 'experimenting with late mowing'. The later the mowing, the less fertility from the cut grass will be returned to the soil, as it will be drier and more mature. The earlier and more frequently they cut the verges, the more lush green compost they will be returning to the soil, causing it to become eutrophic, with the result that plants like nettles dominate.

It all amounts to a campaign to educate the public about the importance of roadside vegetation as a refuge for once common and ubiquitous species, as well as a welcome means of justifying a reduced mowing regimen, thus reducing road maintenance costs. It's a simple thing that will make a big difference and everybody wins, but in garden and streetscape manicure obsessed France it is quite a big step.

Email ThisBlogThis!Share to TwitterShare to FacebookShare to Pinterest
Labels: nature and wildlife, orchids, the Brenne

So glad you have written about this and interesting to read about the departmental differences... why can't they all unite?
Vienne is a large department and therefore I think I have already witnessed 5 of the 20 signs ... (does that mean stretches?) in just a local vicinity!
But on my bicycle today I witnessed rubbish with a certain logo (quel horreur) so have vowed to take a plastic collection sack with meon my journeys!

Sweetpea: Many thanks for alerting me to the signs in Vienne. I've now seen them in 3 places. There seems to be about 2-5 (av 3) signs per stretch of road chosen. Vienne has upped the ante with introducing the idea that members of the public are involved. Vienne Nature is always more visible and obviously getting their message out compared to IetL Nature.

excellent to see the attention to this. lovely little orchards are lucky to get so many caregivers.