Where the Wild Boar Are

Where the wild boar are in France is pretty well everywhere, and over the past decade they've been increasing (although the recent very cold winters may have caused a dent in the numbers). These are genuine wild and indigenous animals, not feral pigs. They are incredibly secretive and discreet, so you hardly ever see them unless you are a hunter. I've only ever seen a small group of them once, at dusk in late winter, in the Foret de Preuilly.

Typical game fence, with barbed top wire and snout wire,
and additional fine netting on the lower third,
buried to a depth of 30 cm. 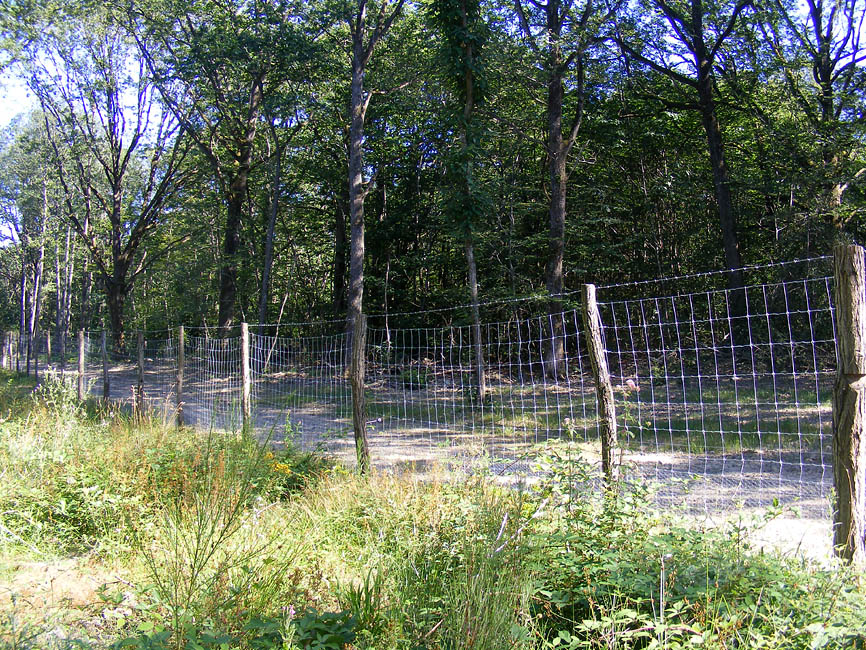 French wild boar are relatively small, with most coming in at around 50kg. Occasionally there will be a really big one of up to 170kg. They are a nomadic species, with solitary males often travelling long distances. Females tend to be more sedentary and live in small herds with their young.

A crop on the edge of the forest, enclosed by an electric fence. 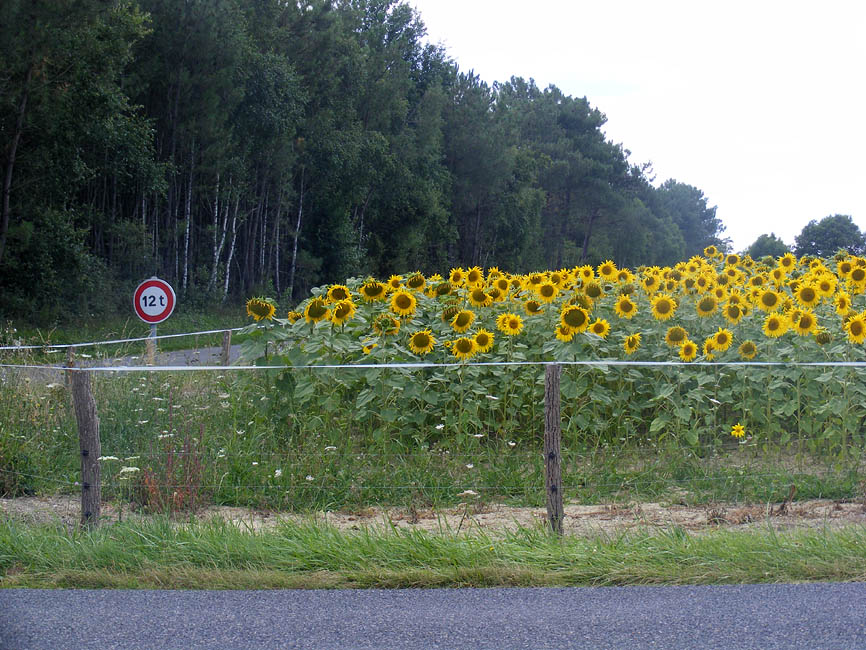 While you may not see the beasts themselves, what you do see, very often, is the evidence of their presence. During the day they hole up in the besom heath and forest undergrowth, but at night they emerge to root about in the grassland and crops adjoining the forests. In the Foret de Preuilly and the Parc de Boussay they are mostly free to roam at will. Farmers can get a grant to erect electric fences to keep them out of crops and there are a couple of fenced private hunting estates. There is also a system of strictly regulated supplementary feeding (agrainage) of the boar during the crop growing season in Indre, to keep them in the forest and out of the crops. This is a double edged sword though, because despite its relative success as a means of protecting the crops, it results in an increased population that the hunters can no longer keep up with.

A chaisse de chasse in the Foret de Preuilly.
They look like giant chairs, but the
hunters stand in them. 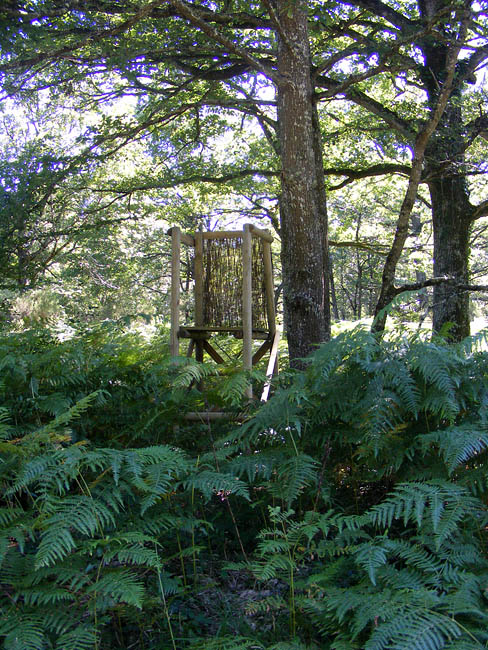 I have been told that the Foret de Preuilly was gifted to the nation by Madame Hersent-Luzarche from the Chateau d'Azay-le-Ferron on condition that hunting was not permitted - with the single exception of wild boar, which were considered a nuisance species. There are chaises de chasse (raised platforms for the hunters to shoot from - literally 'hunt chairs') in many places in the forest and I often encounter the hunt when driving through. By law it is only permitted to shoot boar and they cannot be lured to a site by using grain feeding stations. Nor can they be poisoned or trapped. 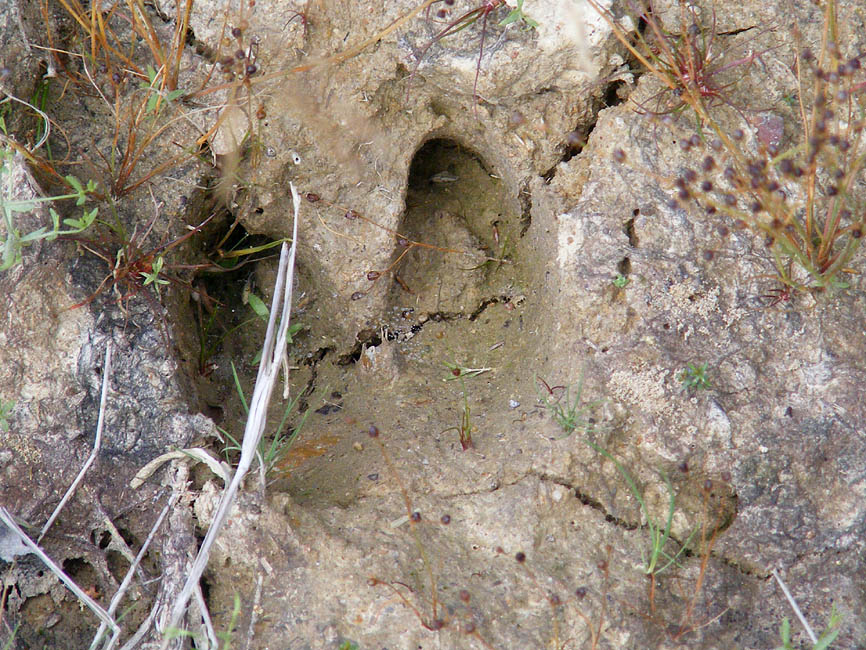 The main style of boar hunt used here is la battue (beating). A group of men with a few dogs trained to find the boar by scent then 'beat' the chosen area and drive the boar towards men with rifles in the chaises de chasse. I imagine a lot of the boar hunted this way escape by doubling back or diving off to the side, or because quite a few of the hunters are fairly poor shots. There is some hunting on horseback in the forest, but the undergrowth is too thick to make it practical in many places, and I think at certain times of year the boar are stalked. Whilst primarily an autumn-winter activity, if boar are persistently causing damage to crops, pasture or vines, affecting sheep or goat breeding operations or causing road accidents, a hunt may get permission to shoot boar in the summer months too.

In most départements hunters must purchase tags which go on the leg of every boar killed. The tags cost 10€ if you are hunting in Indre for the 2012-13 season (1 September - 31 March) and are coloured grey. In Indre et Loire, where there is no organised plan to control the wild boar (presumably because they are less numerous and less of a nuisance in the Touraine) the tags cost €30. There is no mention of tags on the Féderation des chasseurs website for Loir et Cher, so I assume they don't use them in the Sologne. The tags may not be reused, exchanged or carried over to the next season, and there is a fine for not tagging and recording every kill. The tags are a way for the Féderations des Chasseurs (Hunters Association) to compensate farmers for the damage 'their' boar do. The hunters have a vested interest in maintaining a strong healthy population of boar, whereas the farmers (unless they are also hunters themselves) would probably like to see them eradicated altogether (or at best, corralled into enclosed nature reserves). 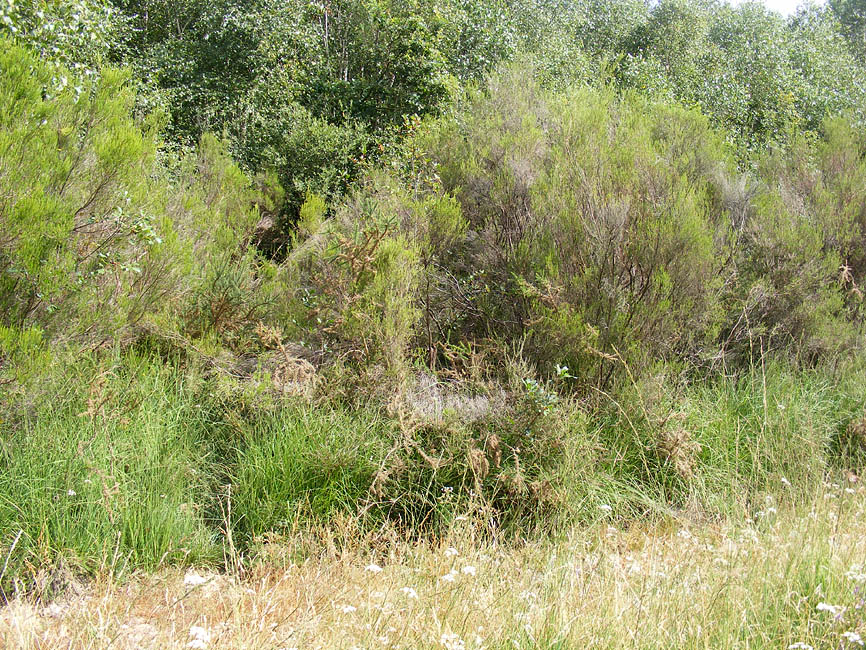 Since we've lived here I have witnessed the increasing corralling of the land. Game proof fences are going up all over and it is often difficult to tell if they are to keep game in or to keep it out. If they are to keep it in, it is most likely a private hunting estate run to cater for the weekend hunters from Paris. These are nothing like the traditional village hunts, where participants have to actually know something about the quarry if they are to make a kill. There is a tendency on the hunting estates to keep the game at too high a density in too small an area, and simply round the beasts up, forcing them past the shooters in their chaises de chasse like plastic ducks on a fairground attraction. The weekend shooters are not always used to handling guns or even being out in 'the bush' and the whole event is a travesty.

A wallow hidden in the forest. 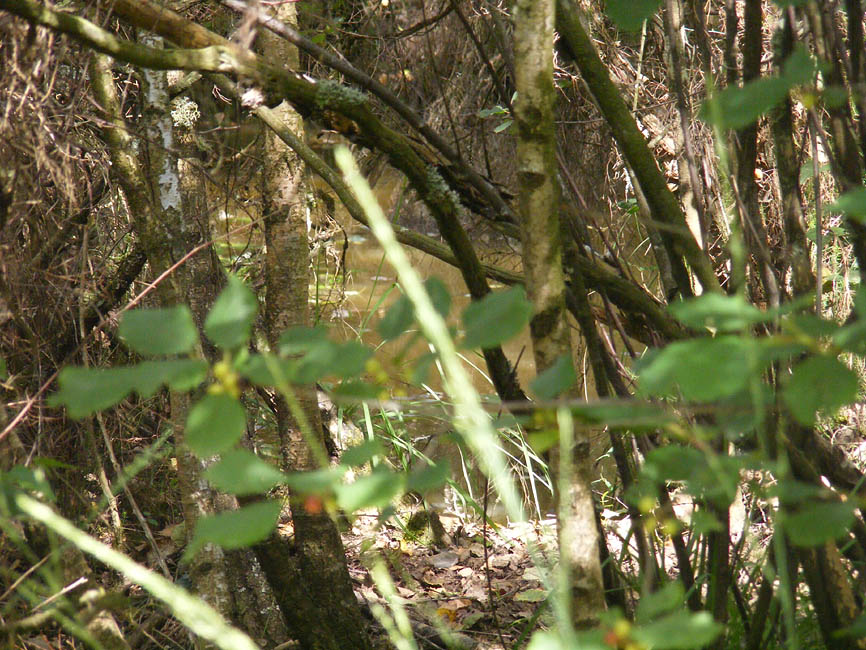 Fences to keep game out are just as problematic, turning roadsides into one long game park with huge potential for serious car accidents. Once again the animals are forced into an area too small for their numbers.

Over half a million wild boar are killed by hunters in France every year. Probably less than 1% of that number comes from the Loire Valley forests, an indication that overly commercial private hunting estates have not established themselves here, and that most hunting here is done along traditional lines. The national population of wild boar is probably over a million, and they are involved in over 20 000 car accidents a year. There are maybe 50 000 registered hunters in the central Loire area, but their numbers are falling and boar numbers are soaring.

I've never been lucky enough to get a photo of our local boar, but friends Colin and Elizabeth got these serendipitous shots earlier in the year.

I obviously have been lucky as I have seen boar four times. Certainly no chance of a photo though, much to fast. Enjoy your day Diane

Very interesting. Have always
wanted to taste some boar.
Imagine it being rather
"stringy" and requiring a
long, slow cook.

We were driving home from Tours at dusk and glimpsed a group of about 5 running through a field just outside Ligeuil.

Great post, Susan!
Sheila, Wild boar stew is delicious and not stringy at all, but it does require slow and long simmering (2 to 3 hours), with some glazed onions, Dijon mustard, red current jelly, etc. ... and a good wild stock. I have a fine recipe! Just let me know if you care to try it. Martine

Diane: Yes lucky - and out at dawn or dusk presumably.

Sheila: Martine is right - it is delicous. Smoke cured for ham is my favourite. It's not that easy to get though - the hunters are not allowed to sell it, or even give it away, strictly speaking.

Butcher here in Charnizay will get you wild boar if you ask.

We've seen them not far from Montresor[up near the ruined hermitage] in broad daylight at a wallow [didn't have the camera] and avoided one with suicidal ambitions on the road just outside Amboise.

We saw two boar families in the Brenne one afternoon earlier in the year - about 30 animals altogether. A couple of years ago a visit to the Brenne coincided with a drive for boar and there were hundreds of spectators all along the road where they expected the drive to cross.

I was stopped on New Year's Eve by a troop of about 30 wild boar. A big one stopped the car and then all the others crossed the road before the big one brought up the rear again. It was quite amazing! A couple of nights later, a smaller troop ran across another road, and to top it all off, we had a little one trapped in the garden after a hunt! I feel honoured!

I'll ask the butcher in Preuilly if he can get sanglier. I bet the guy from Martizay who comes to the market has a ready supply!

My impression is that the boar population in the Brenne is very high (higher than in the Touraine).

Neighbors down the hill from us have complained that sangliers have knocked over their garbage cans at night and fed on the contents. Of course, the culprits may have been badgers.