Yesterday we took the Renault Scenic to M.Musseau at Descartes to have it's bougies de pré-chauffage looked at. This, of course, meant starting the car in the morning - a long and difficult process for a car that has starting problems even before it has been standing out in the cold - all -8°C of it (that's 265 kelvin, or 17°F in the old money).

Eventually the Renault started, only for Célestine to have one or two issues starting. These were overcome by judicial use of the choke (starter) and a helping hand from the battery booster. I then drove Célestine to the garagiste, followed by Susan in the Renault. Leaving the Renault to M.Musseau's tender care we then took Célestine into the countryside for some photos. It was really looking all sparkling and white where the night before's fog had frozen on the trees and the remains of the snow.

A railway crossing at the back of le Grand Pressigny 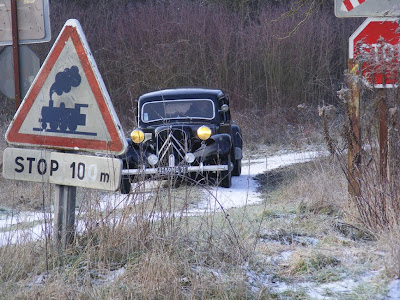 Driving a classic car in those conditions is interesting, but very cold: the heating in the Traction Avant comprising of a tube which collects air which has blown through the radiator, and guides it into the car. A great idea, only if the radiator heats up - something Célestine doesn't do terribly well. Hence we arrived at various pictursque spots in all our winter gear, but with a freezing face (from having to have a window partially wound down so the car doesn't mist up) and freezing feet and legs where the unheated air has been blowing on them.

Crossing the Claise at Humeau. The bridge is the one
featured in the banner for Christmas 2008 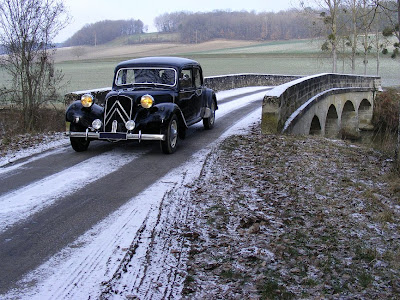 Later in the afternoon we received advice that the Renault was ready to be collected, so we hopped into Célestine and went off to Descartes again. By that time it was getting dark, very cold, a bit breezy, and not at all pleasant. Still, we have proved to ourselves that it is possible to drive over 100km in a classic car in the middle of winter and not have it be an over-exciting (ok - scary) proposition.

Today though, if we go anywhere (and that if is a big one) it will be in the Renault. It snowed a little overnight, and the forecast is for more this afternoon and evening. Being hardy is noble - but being warm is nicer. It will also give us a chance to properly test how effective the new bougies de pré-chauffage actally are.

Email ThisBlogThis!Share to TwitterShare to FacebookShare to Pinterest
Labels: The Car and Driving, Winter

Nice to know that both Regie and Celestine are both back at home and comfortable, hoping you are both the same - time for bed now, goodnight.

That picture of Celestine on the bridge is super. I remember how perishing cold it was going any distance in my dad's various old cars in the 1960's. In the 50's all he had was his motorcycle - now that was really exciting in the snow!

But I am tempted to remark - you call that snow ?? !! But then I wouldn't be so unkind !!
We are getting more of it today, to add to the 6" or so that we have already. We had about 8" but some has gone. No doubt the weekend's snowfall will top it up again. We are both glad to be off work and not faced with the uncertainty of driving around in it for a while.
Keep warm !

Yes Jean, I agree.... the bridge picture, especially with the snow, is a classic! Mind you, she's a boootiful car... Simon, shouldn't she have a muff in this weather... both the 2CVs have... and they only come off if we are motorway driving [a nice cloth one for the '56 and a plastic thing for the '89] and we have no trouble keeping warm. Have a rearch on the Traction Forums. Oh... I was heading back to La Forge on my last visit and a black TA came over the bridge by Moulin de Favier and I flashed him, he stopped alongside the Merc and we had a chat... he comes from Abilly and has Renault Dauphine, '53 2CV, Ami.... etc. Plenty of etc. by the sound of it.
Enjoy your days out in Célestine.

Tim - I've looked for a muff, with no luck: I may have to go for the iconic square of white plastic as displayed on London cabs. I have a feeling I have seen oilskin ones advertised somewhere, but so far they have eluded me.

Jean - the snow is what was left over from Tuesday - most of the white is actually hoar frost. My main worry was black ice - it was everywhere, most noticably in the supermarket car park. Luckily I was hanging onto a shopping trolly when I discovered it. Of course, you are dealing with Australians here (with 10 years of being a Southern Softie) so OF COURSE we don't understand snow!! :)

What a beautiful car!