Paris has a reputation for being very expensive, a reputation it has gained from tourists who don't know how to play the game. At first look most people's reaction is "how can anyone afford those prices?", the answer to which is most likely "they don't". (This is not a purely Parisian problem, the same can be said of London, Sydney and Canberra. I know, I have recently said it myself.) The solution is one that is hard to come by as a tourist - it takes time. You need local knowledge, not only as to where to shop, but how to shop. When we first moved to London from Australia we tended to buy the same stuff we bought every day in Australia. This is an expensive way to live, proved by the fact that over 12 years living in London we halved our weekly grocery bill as we learned to shop like the locals.

We are not Parisians, but by applying some of our hard won small town France knowledge we have discovered some real bargains.

Eating for a reasonable price in Paris, particularly around the Grands Boulevards - that part of Paris "amenaged" so stylishly by Baron Haussmann in the 1870's - is very difficult. In particular the area around the Champs-Elysées can be a problem. We wrote in September about how moving just one block away from a main shopping thoroughfare can improve your chances of finding reasonably priced foods in London - and Paris is the same. Caffé Zaf is more than one block away from the Champs-Elysées, but only just (if you squint). It is one block away from Boulevard Haussmann. (I have it marked on a map here) 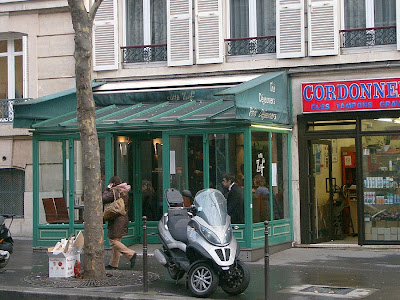 We ate here on our trek back from Australia after shopping on the Champs (as you do). For 8€ each I had a mug of lentil soup and a pastrami bagel, while Susan had a mug of the same soup and a smoked salmon bagel. This was followed by coffee and a macaroon. I will now repeat the price for the incredulous: 8€ each. That is 16€ for the two of us, which compares quite favorably to the $16 Australian (about 10€) for two coffees and one ciabatta at Sydney airport. What is more, whereas the ciabatta at Sydney airport was dry and flavourless, the bagels at Zaf were fresh, tasty and well stuffed with filling. (I know. It's a bit unfair to compare airport prices to anything on earth, but remember, Paris has a reputation for being really expensive).

It's not a Michelin Star dining experience, but it is more like what real Parisians experience for lunch, it is really good value and the procedure for getting a coffee is very interesting (I won't spoil it, I am not even sure I understand it!).

The church of St Augustine is just up the road 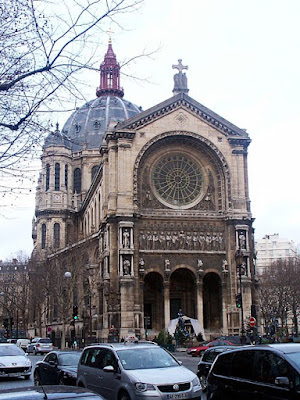 After lunch you can visit the Church of St Augustine which is about 200 metres away, and if you're really lucky they will be tuning the organ, as they were they day we visited. It isn't an old church (1870's) but it is grand - if in need of a clean.

On the topic of good value travel: I am a "destination expert" for the Loire Valley on Tripadvisor. I am, however, starting to question the value of forums where travellers give advice to fellow travellers. Far too many times on the Tripadvisor forum do I see people who have been to a place once or twice, giving advice on where to eat/stay/shop and claiming good value for prices that I would blanche at and no resident of a town would pay. Meals that I would pay no more than 10€ for are suddenly "good value" or even "cheap" at 25€: steack haché, moules, poule et frites. If you're travelling and want to know about value, ask a local, not a fellow traveller - their knowledge is most likely gained either from a book or another traveller further down the track.

This also means that places that you or I might look at and think "not bad" suddenly gain iconic status: Rue Cler is a place that no American worth their salt would miss on a trip to Paris, simply because it gets mentioned in a guidebook that Americans seem to rate above all others (and no-one outside the North Americas has ever heard of).

Simon,
What a good read. We've done Paris 6 times (coming and going) now and the Loire twice, but we can still learn from your experience.
Our last stay in Paris was in the 11th, not a tourist area at all but just as interesting from another point of view.
We will be visiting Tours for an overnight stay in March - any advise?
Enjoy your blogs. How is Celestine?
Leon

The time to travel in Paris, and the cheapest way is --in the past.

Few decades ago I was heading for Paris in the winter and a friend said, "Believe it or not, in the winter you can stay at the George Sank for ten bucks a night."

That was hard to believe, but it turned out to be true.

Today you can stay at the George V for the about the price of a late-model BMW. :-)

Rue Colbert (as mentioned in this thispost) has plenty of good inexpensive restaurants. Tours is a university town, so there are plenty of inexpensive eats and drinks to be had

Berowne. That's only £2 per George!! I hope you made the most of it

Thanks for the tips. I have to make two confessions to you Simon. I so much enjoy depending on TripAdvisor (recent trip to London) and do completely adore Rick Steves. Yikes. I have done a decent amount of traveling and when I first "met" you and Susan it was in researching for our stay in a gite near Preuilly. I think for me they have been helpful jumping off info. bases into a sea of travel info. where I am the only guide, as we do not know anyone living abroad nor anyone who has travelled much abroad besides ourselves. I don't go strickly by "the book" though and we have become more adventuresome in our planning. Like Rue Cler...another confession, yeah, we went, took a few minutes to take it in and discovered we were more delighted with the Avenue Junot Montmartre neighborhood of our apartment instead. Lessons learned.

Jenny - I have no problems with guidebooks - excpet maybe having enough bookcases to store them. That is the secret though: have plenty of guidebooks, and use them the way you do - as a guide, rather than an sacred text