The cold weather has retreated for a while, so it's time to get out into the garden and do some work.

One of the few areas of the garden we haven't yet really tackled is the remnants of the long drop toilets. These are at the end of a little alcove in the garden between the garage and the granary. When we finished work before Christmas and our trip away we had reached as far as putting in a concrete retaining wall at the end of the alcove so we can make a little patio, but we had not really made any firm decisions about what to do where the long drops are. 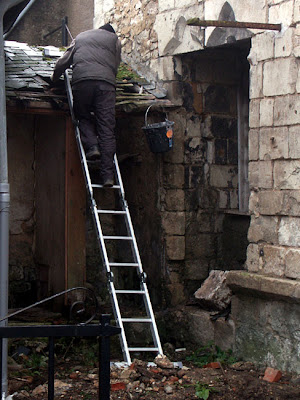 The patient and long suffering Alex arrived on Thursday morning and we started the work we knew had to be done - demolishing the dunnies. This was essential as what remained of the roof was pushing rainwater against the wall of the granary, and we suspect it is this that was causing the end wall of the granary to be damp. Soon Alex was up a ladder, removing slates (to be reused as mulch) and then the roof beams. Next to go was the dividing wall between the two cubicles.

One moment the wall behind Alex's
right shoulder was there... 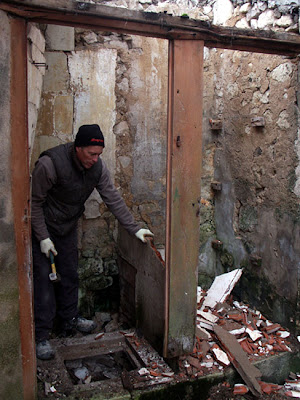 While he was doing this, he inadvertantly touched (literally just touched) the wall of the garage with his back. That was enough to cause the wall to fall on his back (it had to come down anyway, and at least his body stopped the falling masonry damaging anything). Luckily the only damage to Alex was to his pride, so work continued after a giggle break. 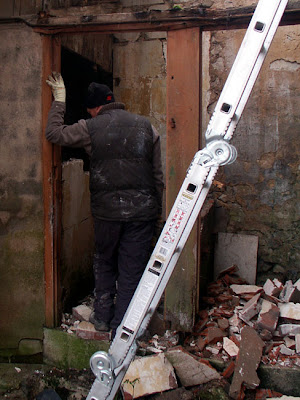 After that was done we started on the concrete floor. We knew this to be suspended over a void, but we had no idea how deep the void was. Our plan was to demolish the concrete pad, tipping the pieces down the hole. We attacked the concrete with a block breaker.

This caused the foot of our garden wall to collapse. This wasn't expected, but it was in a way lucky: when we stopped all work for Alex put in a concrete pad as foundation to rebuild the wall we discovered that up to that time it had just sort of been hanging over a bit of a pit.

The concrete pad that will
soon be holding up our wall 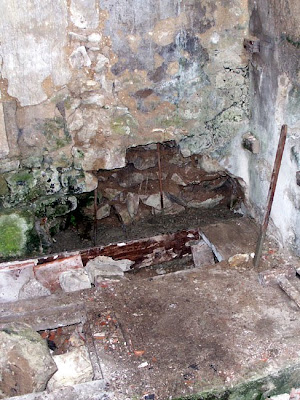 Next step is to rebuild the garden wall on its new base, then finish demolishing the wall that self destructed and the concrete floor to the toilets. Then we can start building our new garage wall and our apéro patio.