Retromobile is an annual car show, concentrating on veteran, vintage and classic cars. It's held in one hall of the expo centre at Porte de Versailles. Reading that it was on level three of hall 7 made me worried that it would be 8 cars and not much else, but I fretted unnecessarily - it's a huge space with hundreds of desirable cars and bikes.

When (and if) I grow up, I want a classic Bentley:
This is a 3 litre unsupercharged model. 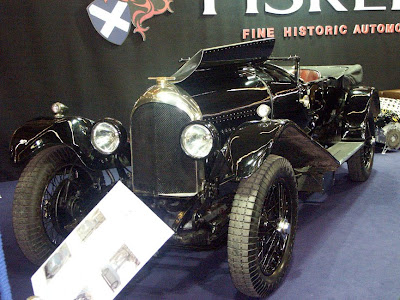 We got there at 11.am after catching the new tram T3. That in itself was a bit exciting, as I have never been on a tram in Paris before, and trams are a favorite mode of transport. It is a bit of a schlep from the entrance to the Parc to hall 7, but at least it was all indoors on moving walkways. Tickets for the exposition are €13 which I thought a bit scary, but then I haven't been to anything like this for over 10 years, so I am rather out of touch. 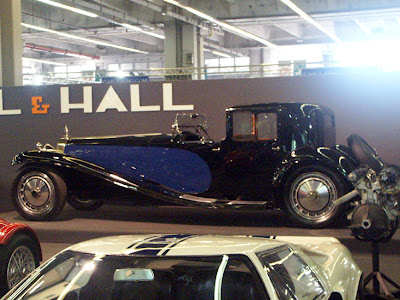 One thing that hasn't changed about these events is the catering: we paid over €17 for a cheese and ham roll, a hotdog, one orange juice and a coffee. Outrageous, and exactly of the poor standard one would expect at a trade show. A very poor showing, but we didn't think that €25 each for a 2 course menu was warranted. 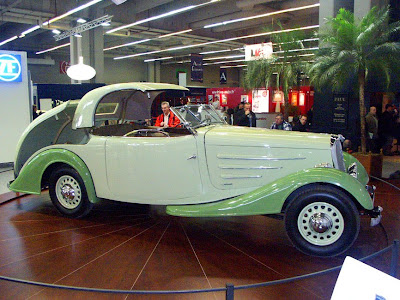 I wasn't disappointed with the cars on display though: Susan has a thing for old Jags, and there was a very stylish C-type just inside the door (no good photo of it unfortunately, too many people standing and gawping), and from there it all just got tastier and tastier. A lot of French cars (as you would expect) plenty of British and Italian cars, and a scattering of American and German classics.

A Delahaye, quite possibly styled on
the Citroën Traction Avant 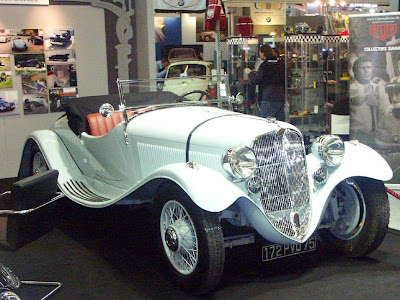 We bought a book about the Traction Avant that looks like it will be really useful- plenty of handy hints for owners as well as having coffee table book style pictures, and the find of finds: 2 headlight bulbs at €10 each. I was tempted to buy some windscreen wiper rubbers (€19) and a queue de carpe (a flattened exhaust tailpipe, fishtail shaped), but didn't. I did speak to the people on the La Traction Universelle stand (all on my own and in French!) about roof racks, and we will probably join the organisation soon - they have some useful resources, and look like they party quite hard.

All in all a good day. More photos will appear as time wears on I am sure - these are just the photos (and/or cars) that jumped out at me

What fabulous old cars. €13 seems very reasonable for such a quality event. I bet you had a great time. (take your own sandwiches next time!)

Simon,
I'm jealous - but if I get to go I'll take a packed lunch.
I did visit a motor museum near your area last year. It was either Chateauroux or Chatellerault.
Hoping to visit the Matra Museum in March near Ken and Walt's place.
Leon

Leon - Chatellerault. We wrote about it here

Simon & Leon, There's also a car museum in Valençay, south of Saint-Aignan. I don't know how much the entrance fee is, but it's a combined ticket with a visit of the local Château!

Thanks Simon - It was an excellent presentation, didn't get much of a chance to see the town, just the museum.
Martine - We also did get to visit both the chateau and car museum at Valencay after leaving the Loire for Burgundy last year. Some great examples of French cars and bikes there.
Leon

Cars and planes are something I have absolutely no interest whatsoever in, except as a mean to go easily, and faster than by foot, from point A to point B.

CHM: Twelve months ago, I would have said the same, but there's nothing like behaviour for changing attitudes (most people think it works the other way round but the evidence shows otherwise).