What to write about on days when you hardly get out of the house? Especially winter days when all you want to do it sit by a roaring fire?

Yesterday our only excursion was to walk to the potager. This was mainly to empty the compost bin from the kitchen on the (not, surprisingly, smouldering) compost heap. It was quite fun walking through the almost pristine snow, and we discovered a difference in attitudes between Susan and myself - whereas I love walking through the pristine snow, making the first tracks, Susan prefers to walk a path already trod and look at the undisturbed snow. Maybe it's a boy/girl thing!

The road to the Potager 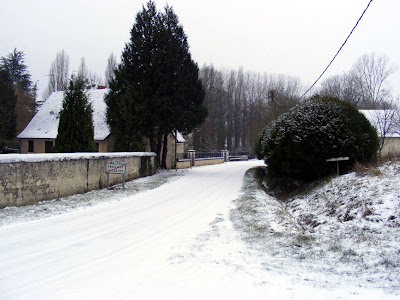 While we were down there I decided the leeks needed harvesting - they were looking very cold, the tops were frozen, and they were going yellow. I thought that didn't bode well for their future, so started pulling them out of the ground. 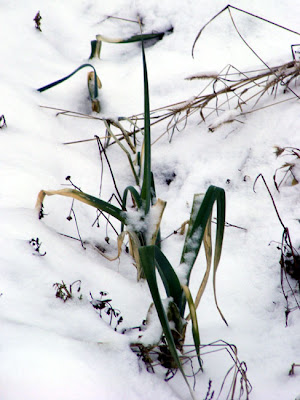 Most of them came out of the ground quite well, although one or two of the smaller ones snapped when I grabbed them, We harvested about 3 dozen leeks of various (but all quite small) sizes. The lack of water earlier in the year meant that although they didn't die, nor did they "do" quite as well as I expected. 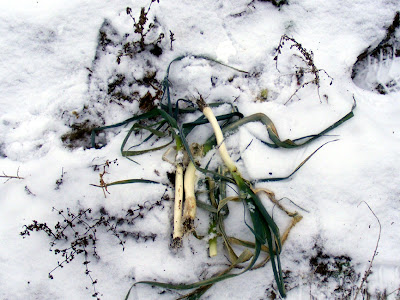 Now we have to make leek and potato soup. One of my favorites, it is the almost ideal winter soup.

I have to say that Leek and Potato soup is one of my favorites ahead of Pumpkin and Pea soups. All of which are great comfort food in your current climate.
Leon

My family's favorite winter time soup is Beach Bar Tomato, which includes cream cheese and half & half. Very thick and scrumptious.
Disturbing the snow or not, I think is a personality thing, not a boy/girl thing.

Leek and potato is one of my favourites too.
I read somewhere once that most vegetable soups benefit from a dash of what I now call "mystery ingredient" - a small glass of dry sherry and possibly a pinch of freshly grated nutmeg.
Any excuse, eh !!

Simon...
Our only outing from the house yesterday was to the allotment to empty the compost bin... only we had to leave the bag in the greenhouse as we couldn't open the bin. The leeks and the sprouting broccoli were the only things standing above the snow. Cabbages, winter lettuce and chard were just humps in the right position. With the impending move to France we are trying to empty the freezer... so left the veg where it was!
When I left la Forge [mid Decembre] our shallots were just peeking and the garlic was well up... I hope they are still there!?