Yesterday we got up at 7am and stepped outside onto an ice rink. The weather had delivered the promised freezing rain the evening before, and the driveway had been covered in tiny balls of ice. By the time we got up though, subsequent liquid rain had frozen and the driveway was covered in clear, smooth, shiny, slippery ice. We carefully picked our way to the garage to collect some kindling for the fire.
The icey driveway 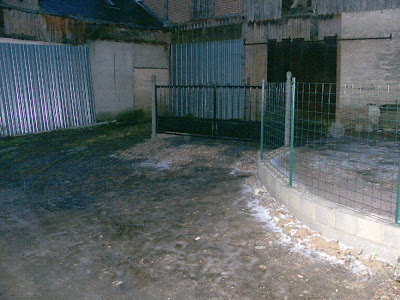 We'd let the fire go out in the night because we were going to be out all day and it gave us a chance to empty the copious ash build up and reset for our return after dark. Fortunately, it was obvious that the icy conditions weren't going to last, as the sky was clear, and temperatures in the positives were predicted - the first time since we've been back that it's gone over 0°C. It got up to 6° and was still 4° at 7.30 pm when we arrived home - it's amazing how warm that can feel!

We set off for Ken and Walt's, up near Saint-Aignan, but first we had to stop off in Loches at the Centre des Finances Publique - in other words, the Tax Office. I had emailed them the day before with an enquiry, and within an hour, they had phoned up to give me the answer...and to ask when I was going to submit our Taxe Professionelle declarations. Mme V from the Tax Office said we would have been sent these when we registered our business, they are pink and grey. I said, no, we definitely didn't have them and asked what the deadline for submitting them was. She said '31 December 2009'. Yikes! I obviously convinced her that we really had never received them, and she said we could have until 14 January to submit them and told me where I could download the forms from. She was extremely kind and patient and told me exactly how to fill the forms out. The next morning we dropped the forms off to her in person and she checked we'd got it right. 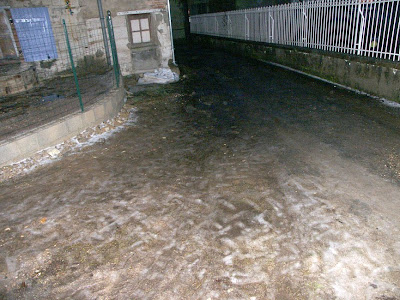 From Loches we pushed on north and it got progressively snowier and slushier as we cut across from Orbigny to Ken and Walt's place. They'd had heavy snow the night before, which we hadn't. Conditions must have been fairly challenging, because even the white van drivers were taking it carefully.

Ken and Walt treated us to one of their delicious lunches (devils on horseback, braised pork chops, collard greens, cornpone, boiled potatoes and pumpkin cake). We exchanged kimchi (I'd made radish and green bean kimchi; Ken had made cabbage and carrot kimchi). They also gave us a jar of pickled cucumber and we gave them some liqueur de noix (homemade walnut liqueur). Best of all, we took a shower and washed our hair at their place. Our bathing facilities are just too perishing and primitive for hair washing at the moment.

After lunch we all went to Blois to the Paris Store, an oriental grocery shop. We got big bottles of soy sauce, some tofu, tamarind paste and a few other things that you just can't get in the supermarkets. Apparently they now have a store in Tours too, which is much closer for us, and we will definitely visit in the future.

As we left Ken and Walt's it was getting dark, and three deer crossed the road in front of us. We decided that it would be best if we took the least forested route home, so that we weren't dodging deer as well as ice the whole way home.

All in all, a happy and successful day.

About the quality of the pictures - they were taken at least half an hour before sunrise, and these two were the only ones where the major feature wasn't a cloud of my breath. It wasn't as cold as it could have been, (like the almost balmy weather this morning) but it was still long-john weather.

So many expat blogs are visciously scathing about French beaurocrasy that it's really good to hear of your good experience with the tax office. (I must say my dealings with UK ones have always been ok, too.) In fact it sounds like a thouroughly pleasant and positive outcome.

I bet you had a great day with Ken and Walt. That pumpkin cake......