Christmas in the Sun

We left Preuilly by bus on the 10th December, aiming for the 9.26 train to Paris. By 8.25 we were getting worried we wouldn't make the train because traffic was going nowhere on the road through Chambre-lès-Tours. A white van had caught fire and all traffic was stopped. Just as I was starting to break out into a sweat, traffic started moving again, and after a brisk trot from the bus station we just made our train.

From there the trip to Australia was uneventful - an 11 hour stopover in Seoul giving us an opportunity to catch the bus into Seoul proper to have a meal, before returning to the airport to have a massage and catch our onward flight to Sydney.

When it is snowing in the Touraine
not everybody freezes. 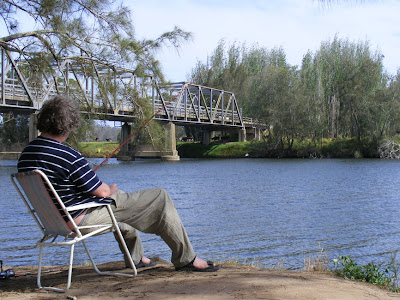 We picked up a hire car in Sydney for the 300km drive to Canberra and subsequent 15 days until we returned to Sydney. This meant that we were able to visit everybody we wanted to visit without relying on parents to shuttle us around or borrowing cars. It's a little expensive for my tastes, especially on days when you're not really using the car, but it is convenient.

We stayed for a week with Rick and Helen who invited us to stay after I mentioned that they couldn't contact us in Australia as we hadn't yet arranged accomodation. Rick taught me at college 30 years ago and we have remained in touch. He is a great mate and he and Helen were most welcoming, providing us not only with a room in their delightful house, but also the use of their caravan at the coast for a further weekend. It was great catching up with them, as we last saw them when they visited here two years ago.

Lunch with Rick and Helen 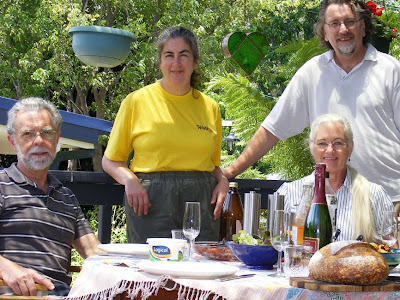 On Christmas Eve we took Katherine (the aforementioned 21 year old daughter) to dinner for her birthday. Katherine was born on the 25th December 1988, an event which has surplanted Christmas for me.

One of these people can't believe he isnt 21 any more.
He also struggles with the thought the other person is! 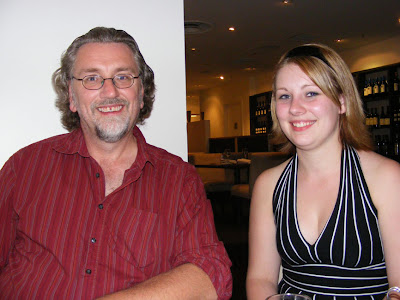 I have already mentioned our trip home, and over coming days we will write in more detail about some of the things we did, but at the moment Susan and I are still suffering somewhat from the trip home.

Welcome back, and Happy New Year!

Happy New Year Simon and Susan.
Isn't good to get back into your own bed?

Summer seems to be quite nice in Australia.

Best wishes for a happy and prosperous New Year!

chm.
quite nice, but weird weather: 37 degrees on Christmas Eve, 17 degrees on Boxing Day. My parents went from airconditioning to heating in 48 hours - that just can't be right!