Treats from an Australian Grocer

People who have grown up somewhere nearly always have some nostalgia for the food they were raised on if they move far away. And I bet at least half of you are now thinking this is going to be a post about Vegemite. Wrong.

Although Vegemite is quite nice occasionally, and I certainly grew up in a household which had a ready supply, as my father eats a slice of toast with Vegemite every morning for breakfast.

OK, so now about a quarter of you are thinking, oh well, in that case, it must be Tim Tams. Wrong again.

Although they are perfectly nice chocolate biscuits, I prefer a good quality British chocolate digestive. 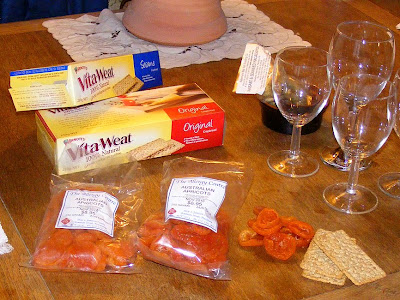 No, the two things I really hanker after are:

Vita-Weats - made by Arnotts, the most well-known Australian biscuit manufacturer (also responsible for Tim Tams as it happens). Vita-Weats are very hard, very crisp rectangular cracker biscuits that go fantastically well with cheese (or, indeed, Vegemite). They have a mouthfeel like no other biscuit. I've never seen these outside of Australia, although Arnotts export Tim Tams to the UK and they are widely available in Tesco supermarkets there.

Proper Australian dried apricots - not those sickly squishy Turkish ones, but intensely flavoured, leathery Australian ones. Very occasionally I was able to get something similar at Borough Market in London, called 'sharp apricots', from Cranberry, but they didn't always have them.

You may notice in the background a packet of macadamia nuts too. These are one of Australia's gifts to the world. Macadamia trees are native to Australia, and make a very attractive addition to a suburban garden or rural orchard if you live in the northern half of the country.

Susan,
You are making melancholy for Australia - AND I LIVE HERE!!!!
Vegemite, never leave home without it. Customs are never quite sure.
As for Arnotts, even though they haven't lost their Oz heritage, they have been owned by a US company since 1997. Sad but true.
Love your blogs.
leon

Macadamia nuts. Are they as expensive down there as they are up here (in the Stytes)?

Hi Susan, I will be posting soon about the wonderful meal we had at yours last Saturday, with all the Australian goodies you treated us to. I still think your husband does not fully appreciate what a gem of a wife he has. Joke - MDR - I know he does really !!!

My mouth is salivating just thinking of Australian apricots. I have seen them at Trader Joe's and can get them on line too. Not cheap but worth every penny.