A New Orchid in the Orchard

The rosettes of Lizard Orchid leaves in the orchard now number over a hundred (I'm still marking them, but have given up counting). I'm wondering how we are going to pick fruit without squashing significant numbers of the plants, and mowing is certainly going to be challenging. I am thrilled to have so many, but a few more appear every day now, and marking them in this cold weather isn't quite as enjoyable as it could be (-4°C on Saturday and so cold the car doors stuck to the car so I had to really tug to get them open).

A second orchid species appears in the orchard. 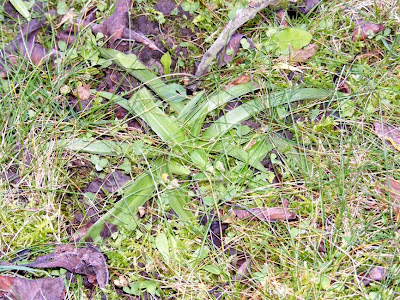 Yesterday proved that it really is worth keeping up with the task of monitoring the orchids in the orchard though, as I came across a different species. Like the first Lizard Orchids I found, this one is in the midst of the cherry trees. Like the Lizard Orchids, it's just a few rosettes of leaves at this stage. My best guess is that it is Green-winged Orchid / Anacamptis morio / Orchis bouffon, but until it develops a bit more I can't be sure. It will be nice if it is a Green Wing, as we currently only have photos of a distinctly past it specimen, and having one I can photograph in its prime will be excellent. 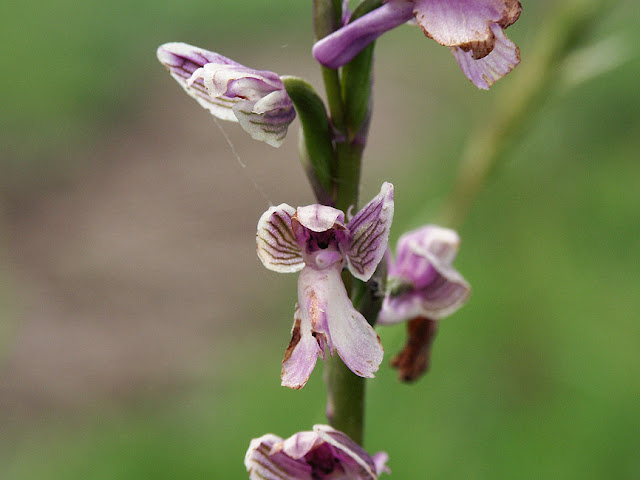 The distinctive feature of this native terrestrial orchid are the veins on the lateral sepals, usually strongly marked in green, but sometimes, as in this example, in dark purple. They flower from April to May-June, with the leaves appearing from the end of September. Pollinated by bumblebees, they like full sun and grow in waterlogged or dry conditions, peat or loam, weakly acid to alkaline soil. You can find them in unimproved pasture, unfertilized lawns, grazing meadows, hay meadows, calcareous slopes and woodland clearings. In the '3 départements' (36, 37 & 86) that centre on Preuilly they are common.

You'll have to give up mowing the "lawn" altogether and let your orchard go back to its natural condition. LOL or MDR

Then you will have your own private preserve, just a few steps from you home. How nice and convenient!

How wonderful! is it possible to transplant some if you have too many? Would these orchids grow in our sometimes partly marshy field which was used to graze sheep until last year when we planted poplars and willow on part of it. It is heavy clay soil. Last year we mowed the grass in between to allow the wands to get established. We have had marvellous wild flowers after the neighbour has cut the grass. When is the best time to cut the meadow to generate the wild flowers? You could email me if you wish.

CHM - it needs to be mowed occasionally, because we can't graze it. The orchids will do better if it's carefully mowed at the right time of year to mimic a lightly grazed sward. If you don't graze or mow the grass species become too dominant.

Sweetpea: Unfortunately terrestrial orchids rarely survive transplantation because of their dependency on the mychorrizal fungi which form the link between their roots and the soil. Orchids are very sensitive to disturbance, and a new site will have a different mychorrizal mix. It's also illegal to interfere in any way with many species. Don't despair though. I'd be surprised if you don't have orchids already, or at least waiting in the wings to colonise, especially if your work has left a few bare patches that new plants could take advantage of. We mow the orchard in May, July and October. Ideally, I'd like to just mow in October because the May and July mows will involve dodging the orchids which will in full growth. By October they will be dormant and below ground for a while. We mow earlier in the year because it's a nuisance trying to find fallen fruit in the longer vegetation.