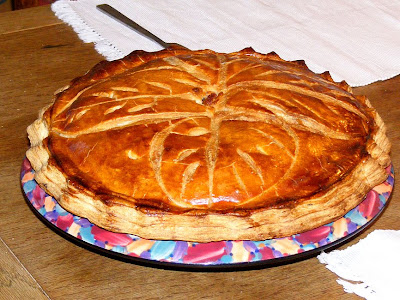 La Galette des Rois is a puff pastry dessert, traditionally served on Epiphany, which is today. Hidden in the pastry is a token, the fêve or 'bean'. Whoever gets the token in their piece is crowned king for the evening. Epiphany is the celebration of the arrival of the three Magi in Bethlehem, so it all makes sense. 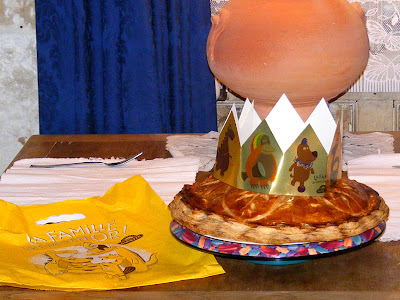 Galettes are very easy to make (see Ken's post from last year about making one), but I bought this one from our boulangerie. They were being sold as a fund raiser for the local primary school. This is an 8 person galette as the baker had run out of the 4 person size. It cost €13 and she assured me that I could cut it in half and freeze some for later, or it would keep for three days in its bag in the kitchen. As we had Nick and Jean from A Very Grand Pressigny coming to dinner I decided to keep it whole and serve it for dessert following carrot and beetroot salad, stuffed lamb loin with boiled potatoes, pear sorbet, and cheeses with Vita-Wheats.

This one is filled with frangipane (almond paste), but I had a choice of pomme (apple) or sêche (literally 'dry', meaning 'plain', which I didn't think sounded terribly appealing). 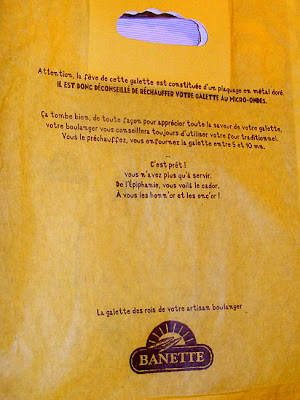 The bag it came in says:

'Please note - the bean in this galette is coated in golden metal. IT IS THEREFORE NOT ADVISABLE TO REHEAT YOUR GALETTE IN THE MICROWAVE.

To allow you to appreciate the full flavour of your galette, your baker will advise you to always use your traditional oven. Preheat it and put the galette in for 5 to 10 minutes.

It's ready!
You only have to serve it.'

(The next two lines play on the word 'or' ie gold, and I assume the intended meaning is - loosely - something like 'At Epiphany, here is your golden gift, to you the honour and more' - although I think le cador might be interpreted as either 'ça adore' or 'le cadeau d'or' - but these French word plays are always too tricky for me and I am probably totally wrong.)

I reheated our galette by setting it on the mantelpiece to be warmed by the fire, which worked very nicely.

This is the first Epiphany (aka Twelfth Night) we have spent in France. We're somewhat surprised it isn't a public holiday, but pleased that it's a white one: it started snowing sometime during the night and we have lovely snow cover. It's still snowing, so I guess it's time to find some warm boots, put our big coats on, and go take some photos.

Maybe we will even put a saucepan of red wine on the top of the fire before we leave.

Susan, cador is a word derived from the Arabic meaning "chief" or some other powerful individual. A synonnym is caïd. I'm not sure I understand the little verse very well.

The galette was delicious and I admired your clever way of warming it on the mantlepiece. Why not? We had a traditional English Christmas pudding on New Year's Eve which we cooked on top of the poêle where it simmered nicely for an indeterminate amount of time but which seemed to be long enough - the proof of the pudding is, after all, in the eating.!!

Wow, the snowy rooftop picture is amazing !! When did THAT arrive?

I was reading recently in a book called "Pardon my French" about a custom where someone is sent under the table to point out which person should get which slice of the galette so that no cheating can take place if someone spots the feve and bags that slice in order to get to wear the crown.

I volunteer Simon for the next time !!!

Glad to have found your post since hubby rarely eats any other pie than apple (or sweet potato) ~ the Galette des Rois is a nice twist on the standard. So, in place of the almond paste, I would use two or maybe three russet apples? Here's to a good try!