As you know, we have two cars:

One is a 1999 Renault Megane Scenic, and the other is a 1953 Citroën Traction Avant 11b. Both are brilliant cars in their own way: the Scenic is comfortable, economical and carries a huge load, and Célestine is... well, Célestine, 'nuff said. Both also spent three very cold weeks not being used while we were in Australia.

Guess which car has taken being left alone such a long time the more personally? Yup, the Renault. We must admit Célestine spends her time in the garage under a car cover, but it's cold (seriously cold) even there, maybe not quite as cold as the front courtyard where the Renault sits, but you would still expect the modern car to be more dependable.

The Renault, recharging on the new patch of cobbles.

On Tuesday we had an appointment to take Célestine into M.Musseau's garage for a service: just a general grease, oil change, check the fanbelt and antifreeze, and also to fit a new tyre. The idea was for us to drive both cars to Descartes, leave Célestine with M.Musseau and drive the Renault home. Célestine started first time (which surprised me so much I promptly stalled her), but the Scenic?

Nothing - lots of grinding noises, and laboured wheezing, but no start, We tried the battery booster, we recharged the battery with our new super duper dual voltage battery charger with start function, but no action. We suspect it is the glow plugs (bougies de pré-chauffage), but it could also be the battery is on its last legs. Or even (and this is the most likely scenario) both. We did eventually get both cars running at the same time and Célestine was delivered to Descartes on time.

Whilst Célestine was in with the garagiste, the Renault spent the night in our garage having the battery charged on a long slow recharge. That is just as well, as Tuesday night was the night we had the snow and I doubt if it would have started at all when time came to drive to Dscartes to collect Célestine on Wednesday afternoon.

Looking down our street on Wednesday morning.
The road to Descartes is the cleared road at the
foot of the hill. Luckily the snow had cleared
somewhat by the time we went to collect Célestine 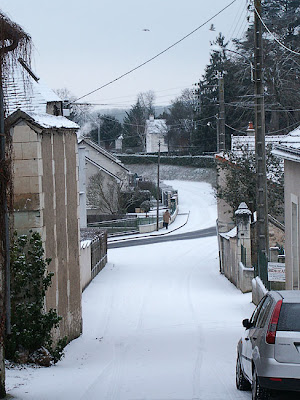 We picked up Célestine with her new tyre fitted, oil changed, lubrication points greased and brakes bled on Wednesday afternoon - the snow was still lying around and looking pretty, but the roads had all been gritted and were clear, if a little icy. I was slightly worried about road-holding in the icy conditions, but we all arrived home safely.

Célestine arrives home in the snow 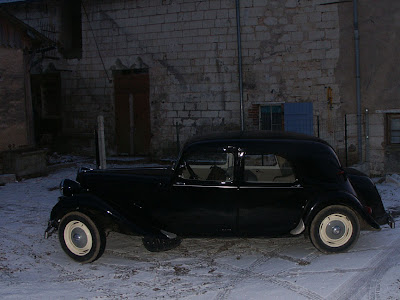 We have arranged to take the Renault over to Descartes this morning to be looked at, so hopefully soon we will have easy wintertime starting on both cars. It's at times like this I remember why I was so pleased to have no car at all when we lived in London.