Lurking in the Loo

Australian toilet seats have the reputation of harbouring deadly poisonous animals like the Redback Spider, ready to bite any unsuspecting bared bottom that descends. Personally, I always found that the letterbox was much more likely to have a resident redback, but you do have to watch out for creatures living in the loo. The species I'm thinking of could give you a fright, but no more.

Tree frogs seem to find the cool fresh water of a toilet bowl congenial and I was reminded of this when we stayed for a few days on the New South Wales south coast. The toilet of our borrowed on site caravan had a resident Southern Laughing Treefrog Litoria tyleri (aka Tyler's Tree Frog). 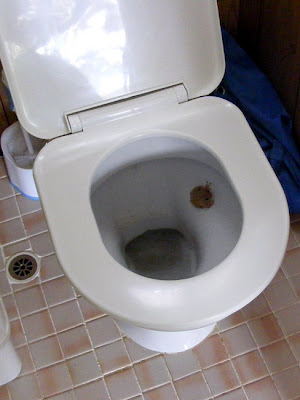 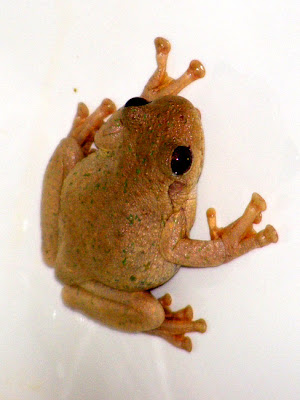 This species is very similar to Peron's Tree Frog L. peronii (aka Emerald Spotted Treefrog), and indeed, it took me a little bit of research to decide which species I had. In a way, it's a shame it isn't Peron's Tree Frog, because then I would have an excuse to tell you all about François Péron.

Oh, what the heck, I will anyway!

François Péron (1775-1810) was a French zoologist who accompanied a French exploration of the Australian coastline between 1801 and 1803. When the captain of the expedition ship, the Geographe, died before they made it back to France, Péron took on the task of writing the official report. He too died before its completion, but his most significant contribution was the collection of over 100 000 Australian zoological specimens. As a consequence, many Australian species are named in his honour, as is a national park and a peninsula. His publications on Australia are not uncontroversial, and cover many subjects including the Tasmanian aboriginals, and suggesting that the French invade Port Jackson with a group of dissident Irish mercenaries to wrest control from the British.

Litoria peronii is not the only Australian frog named after Peron. There is at least one other, as well as many sea creatures. Here is a link to the transcript of an Australian Broadcasting Commission (ABC) radio interview with the historian Edward Duyker, on the life and times of Péron. A dashed interesting chap, I think you will agree.

I had a tree frog that lived in the spinner of my twin tub washing machine. He was removed before each wash, but always made it back in time for the next.

So if they're found in toilets and washing machines, why are they called tree frogs?

Lovely story. I wish I had a frog in my toilets!

Why not, some people have frogs in their throats! [In French, it's a cat!]

So is one supposed to remove the frog from the toilet before - errr - you know !!??

Oh, so true! I had forgotten until this post about discovering a similar frog in a toilet back home (Canberra), and flushing the little critter back down. Three days later, he was back again, except this time he jumped out of the toilet and around the bathroom.

Deciding that my frog-coping skills were clearly inadequate, I called in the big guns (the father) and he took the little fella outside. Relief!

(P.S. Our resident redbacks abide in the garage...)

Jean: the usual way of dealing with them is to flush before you go. The frogs come to no harm, and it's rare to have an experience like Hannah's where they leap out.

Thanks Susan, I shall bear that in mind for if I ever visit Australia - which is, as it happens, one of my secret unrealised ambitions.