While you have been reading about Australia, Susan and I have been in Paris. We travelled up by train on Tuesday and spent 2 nights in town so that we could spend a whole day at Retromobile, the annual classic car show. As I said in an earlier post, Paris can be expensive - but it can also be surprisingly reasonable if you know where to look

When we are in Paris, we always stay at the same hotel. Le Laumière is a two star hotel in the 19th Arr, three stops from Gare du Nord, in a nice middle class area with plenty of shops, cafés and restaurants. One of its big advantages, especially on days like the past few where it has been a touch chilly (didn't get above zero on Wednesday, and the wind wasn't warm either), is that the hotel entrance is only 25 metres from the Metro exit.

Laumière Hotel from where you emerge from the Metro.
It's the building with the burgundy coloured awning 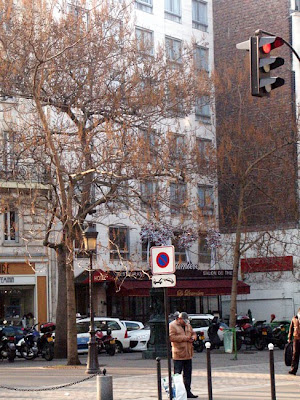 Another advantage is the price: €61 per room per night for room with shower and WC in a two star hotel*. You can pay anywhere from 50% to 200% more for a two star hotel 10 minutes closer to the centre of town.

In addition to the restaurants (ranging from west African cuisine to one run by the carpenters' guild) the Parc des Buttes Chaumont is just at the top of the street and one of the nicest parks in Paris, much frequented by locals.

Our room - small and orange, but quite comfortable and quiet. 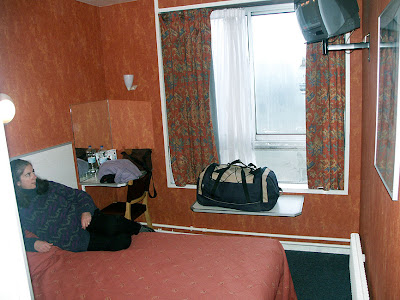 The lounge, for chatting with friends in the winter,
the garden terrace beyond for the summer
- both very pleasant. 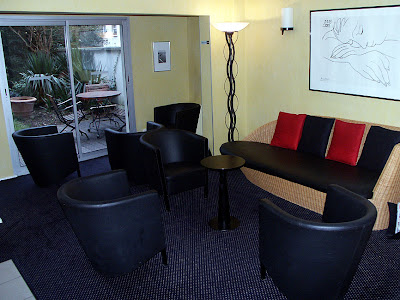 The breakfast room. We have eaten breakfast here - the
9€ buffet is good value, but we tend to have
just a coffee and a croissant at one of the local cafés 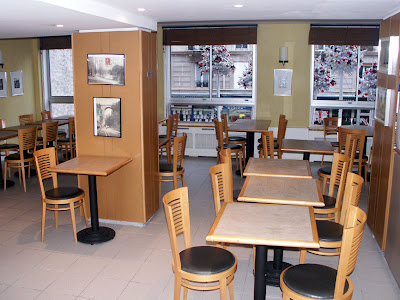 They are incredibly friendly at the hotel: it is run by a family and has been for many years. It is also very popular - Wednesday night they were Complet

*the official star rating in France isn't to do with luxury or the lack thereof, but the facilities and size of room. A less "nice" hotel, but with bigger rooms and more power points might have more stars
Posted by Simon at 09:00