A Weekend at the Coast

One of the great Canberra traditions is the weekend at the coast, the coast in question being "The South Coast", that part of the New South Wales coast south of Sydney. The centre of the South Coast is Batemans Bay, a town of 17,000 people at the mouth of the Clyde River, about 2 hours drive from Canberra.

In the last 30 years the South Coast has really grown up: once it was all caravan parks and fibro shacks (there is a great blog about the south coast and fibro shacks here), now in parts it looks like a suburb of Canberra: all unfeasibly large McMansions on improbably small blocks of land.

There are places where the old South Coast can still be seen, and the weekend before Christmas Susan and I visited one such place. Tuross Head is somewhere I have visited before, when I was about 12 years old, but I don't recall ever staying there.

Me walking along the foreshore of Lake Tuross.
The Summer weather in Southern
New South Wales often looks like that 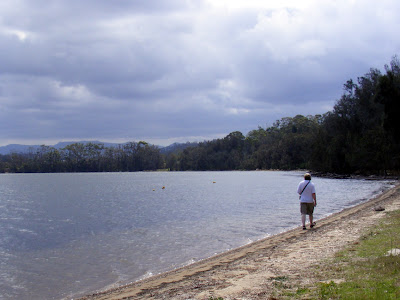 In December last year our friends Rick and Helen very kindly lent us their "Love Shack" - an on-site van with permanent annex sited almost on the waterfront at Tuross. It came fully equipped (even to the extent of having some surf gear and fishing gear) and was the perfect place for Susan and I to gather our strength for Christmas with the families.

The Love Shack (their words, not mine) We didn't do much: a couple of bursts of fishing (total caught 6 small bream and a large flathead that got away), a walk on the beach, and much just sitting around. We talked about hiring a "tinny" (a small aluminium boat), going to Montague Island, and bushwalking, and in the end did none. I managed to not even get more than my feet wet (I am so over beaches it isn't funny). 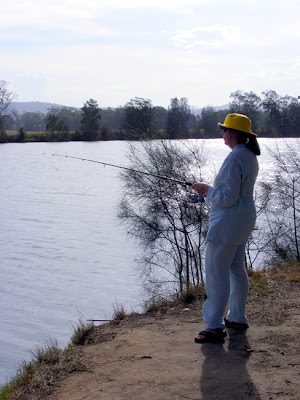 Still - It was really nice to get away and see a part of the world I haven't visited for many a long year. It was especially nice, after driving through the suburbia that is Batemans Bay, to find somewhere where parts of the South Coast as I remember it are still visible.

Simon, have you been to the Phillip Island Pengiun Parade? That's one thing I would like to see one day...

More Australian photos. Please! It feels so exotic. And your photos and Susan's are always so beautiful.

From now on I'll sign my comments since blogger wants me to stay anonymous!
Let's try once more.
chm

I am enjoying your Australian day indeed. But it puts a question in my head in regard to weather? Once, when visiting my dad in Houston(TX) over Christmas it was 85F and humid and raining. For whatever reason the festive spirit was dampened by the weather to me...so my question is: Holiday wise does the weather effect your holiday mood as I imagine Australian Christmas/Easter, etc have different seasons than your European celebrations? Hope the question is not inane, just wonderin'.

Goodness, as I posted the question I just noticed your "Thought for the Week".

Susan and Simon.
I agree regarding your photos (and the words that go with them). Your blog is part of my breakfast reading.

Jenny,
Seeing snow at Xmas on European Blogs is nice as we never see snow in Melbourne but Xmas is where you and family live regardless of weather.
Leon
melbourneourhome.blogspot

Beaver: I saw the penguins on Phillip Island when I was about six. They gave me measles (must have been them as I came down with measles a few days later...)