In July 2008 I wrote "The Circus Hits Town" - but I was writing about the Tour de France.

Last weekend the circus really did hit town: the Cirque Boltini was at the Champ de Foire on Saturday and Sunday - two performances only. We didn't attend - in fact we didn't know they were in town until Sunday afternoon.

We did, however, wander down after our afternoon constitutional to have a look. The big top was more of a smallish top - we didn't feel we could go up and look through the door, not having tickets, but from what we could see we guess the capacity is about 40 people. 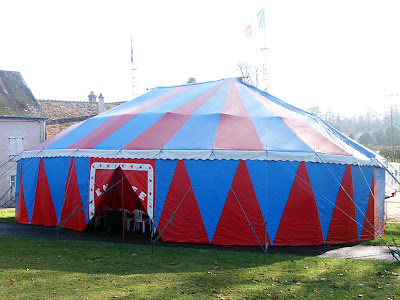 We can't say for sure what sort of acts they have, either, but we are guessing that animals feature: it's not often you see a llama grazing the school car park. 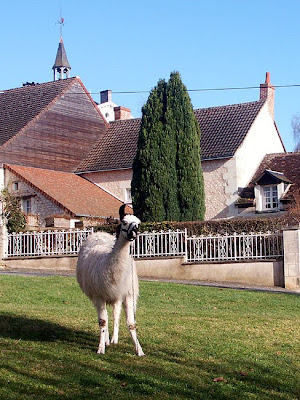 We were also rather taken by the Bactrian camel. Next time the pyracanthus around our potager needs pruning, we'll know where to go! 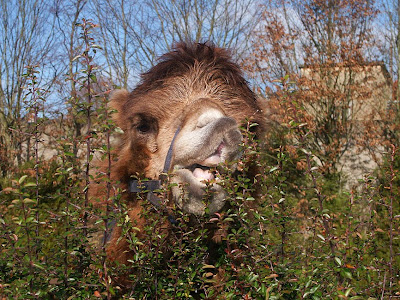 In addition to the llama and camel, there were a couple of poneys (spelled correctly, this is France, you know), a goat and a couple of dogs. The sideshow alley was a bouncy castle (no idea what the French for that is!), and the dressing rooms were 4 caravans.

It was a really pleasant afternoon for a walk - 11 degrees and sunny, with exotic animals as a bonus. What more could a man going stir crazy need?