'S No Place for the Weak

We awoke yesterday to a lovely white scene - and pitch black. I am not sure when it started snowing, but at 8.00am the snow was still drifting down. Sunrise being at 8.35 it was still very dark, so an opportunity to take a some proper winter photos.

Looking down our street. 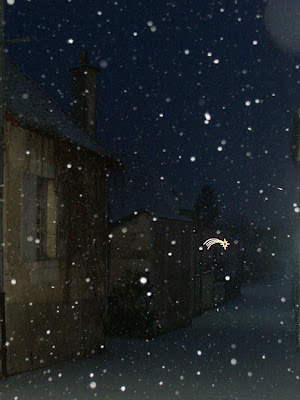 Once the day had arrived properly (I was going to say "sun rose", but you would have been hard pressed to tell) and we had finished breakfast we put on all of our clothes and coats and went for a walk. This is the first time we have see Preuilly properly in the snow, and very pretty it is too.

Our first destination was the old town (or maybe chateau) wall from where we take the panoramic photos we have used often as a banner photo for the blog (and is the current header). Yesterday was no different. It was cold up there, but the view was worth it and we were interested to see that you can't really tell from above which house in town are occupied and which aren't - the occupied houses obviously being insulated, and the unoccupied ones being unheated. No house had melted the covering of snow on its roof.

To get the full effect, click on this photo and view it full size.*
The view is made up from 6 photos

From there we walked through town down to the river. Everything was lovely and white and crunchy underfoot, and the water on the plan d'eau had frozen then been covered in a light dusting of snow. From there, it's only a short jaunt to home, and when we arrived home the saucepan of red wine we had put on top of the fire had magically melded with the orange, cinnamon and sugar in a lovely warming beverage. What else could we have wanted? 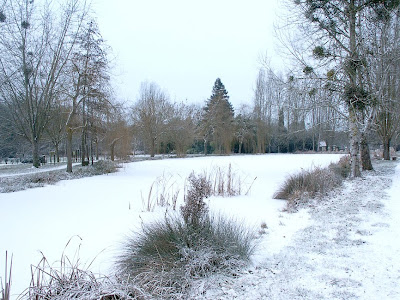 It is forecast to snow the next couple of days - this morning's snow has so far been less than yesterday's but more is on its way later this morning. The temperature is suitably frosty, so any snow that does fall will hang around for a considerable time where the council don't get to it first. It the weather clears and we get some sun there may even be some sparkly photos taken!

*The photo didn't load into Picassa quite as I had hoped. I will try work out how to get the image full sized. I have now loaded the full sized image. click on the photo, then when it loads in a new window you should be able to click on it again to see full sized. It works for me, anyway...
Posted by Simon at 09:00

Email ThisBlogThis!Share to TwitterShare to FacebookShare to Pinterest
Labels: Pictures of Chateaux, Pictures of Preuilly, Winter

The "skyline" photo is brilliant!

Walt.
Thank you - 6 photos and 20 minutes work to stitch them all together. Just a pity I cant make the photo load full sized when you click on it!

I loaded the photo full size. It was spectacular. Don't you love days when you can snuggle up at home while it snows outside!

Worked for me - glorious view.
Leon