Last night we slept in our own bed. Normally this isn't cause for note, but we have been in Australia (as some of you may have known/guessed/surmised) for the past three weeks.

We arrived home last night after spending 94 hours travelling. We left Canberra on Sunday at 7.30am local time and drove to Sydney, where we spent the night after visiting some friends. Our plane left Sydney (theoretically) at 9.00 Monday morning (it was delayed leaving Seoul, so in reality we left at 10.30). After an 11 hour flight we arrived in Seoul and spent the night in what will soon be a very nice five-star hotel, but which is at the moment an uncompleted five-star hotel with not much in the way of catering.

Korea from our hotel room. We never saw this view
in daylight, leaving an hour before dawn. 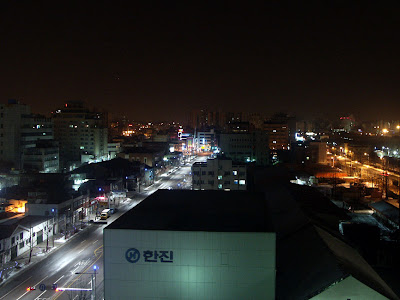 After a good night's sleep, we left the hotel at 7.00 for our 10.00 flight to Paris, which was delayed by 90 minutes because they couldn't get any of the toilets on board to flush. This made us late arriving in Paris, which meant we wouldn't have made the train to Tours in time to catch the onward bus to Preuilly.

A Big Thing in Paris. 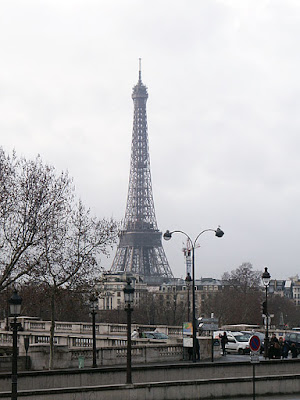 As I had planned for a minimum stress trip I had allowed for delays and had booked a room for the night at le Laumiere. I had also booked a train ticket for 16.15 to get us to Tours in time to catch the evening bus.

Welcome home. Can you only say that if you're actually in the place the person is coming back to? Cause I'm not in Preuilly, but glad you made it home safely. Thanks for the picture of roofs in Korea. Hadn't seen that one, but it definitely looked Korean. Maybe it was the writing on the buildings.

Simon and Susan,
Leon and Sue can only have empathy with you, but getting there and getting home is always worth it.
Welcome home, and welcome home both ways.
And of course, happy 2010.........

Welcome home and Happy New Year! I hope your trip home was a good one.

Yes, welcome back to Touraine. You missed the winter, it seems. Spring has arrived.... strike that, it's supposed to turn cold again tomorrow. See you soon, maybe.

Best wishes for a Happy New year Susan and Simon. Whilst you were travelling to get back to France , I went to Boston and back after spending 3 night there - leaving on Sunday at 9 am and getting back last evening at 7 pm. You must be "fatigued" (using the lingo of my nephew)

Thanks all. Being home is great, even if the body does tell me it's time to get up at 3.00am