We inherited a small patch of Jerusalem artichokes in the potager, and have been digging a few once or twice a week since mid-October. They are delicious roasted, or in a cream sauce, but they do have an unfortunate side-effect.

In vulgar households (like ours) they are referred to as fartichokes, but I have just learnt that in some nice households they are known as sunchokes. In French they are topinambours (sometimes shortened to topinam). The name sunchoke makes good sense, as they are not related to artichokes, and don't come from the Middle East, but are related to sunflowers (in fact, they are the same genus, Helianthus). The plants look a lot like small sunflowers above ground, with similar leaves and flowers. Below ground though, once the leaves and flowers have gone brown, they set about making starchy white, slightly knobbly, mildly nutty flavoured tubers which go well with all the other earthy winter veg. I never peel them, just scrub well.

These will be combined with the leeks pulled at
the same time and made into a creamy soup. 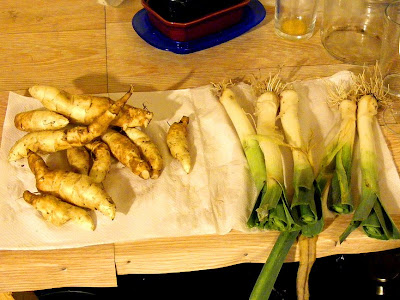 Some people around here grow substantial quantities of fartichokes – long rows that must yield enough to feed a large family.

They seem to be very easy to grow – apparently you just leave a few tubers in the ground each winter and they grow on to provide next year's crop.

Sunchokes or Jerusalem artichokes really are good tje way your describe cooking them. They have the same effect on our digestive tracts. We had some last week.

The "artichoke" in the name comes from the fact that they taste a little like artichoke hearts and bottoms. And the Jerusalem part is apparently a corruption of the word "girasole" — "turning with the sun" — meaning sunflower.

I eat my peas with honey,
I've done it all my life.
It makes the peas taste funny,
But it keeps them on the knife.

I have never eaten Jerusalem artichokes to my knowledge but I will look out for them and give them a try.