Ever since we have known our house we have been missing a patch of cobbles in the front courtyard. This was patched at some time in the not too distant past with a lump of cement which was neither elegant or practical - at some stage the cement had broken, and it was turning into a gravel pit.

The front courtyard as it was 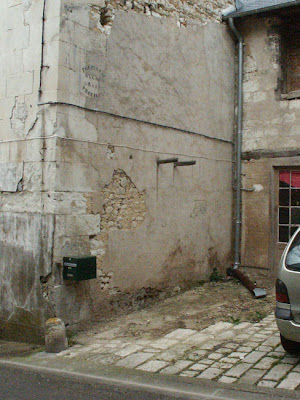 When we had the digger in the concrete was broken up and removed, and in the process we found a stack of cobbles which had been used as hard core. This cheered us up, because it could mean we might have the whole courtyard looking the same 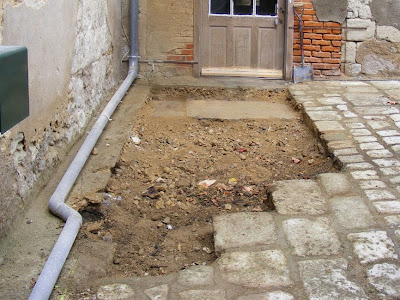 Alex laid the cobbles on a bed of cement. I had measured all the cobbles and written the dimensions on them. This was important as the cobbles are laid in rows of different widths, and having the cobbles marked meant Alex could choose the next cobble to fit a particular row.

Bedding the cobbles in 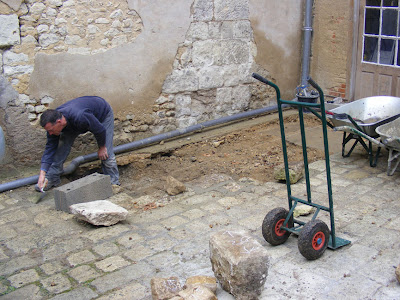 We didn't have enough of our own cobbles to finish the job, so we ask M.Douady the mason if he had any reclaimed cobbles he could sell us. Luckily he has recently lifted the floor of an old barn and has beaucoup cobbles which are a very close match to ours. 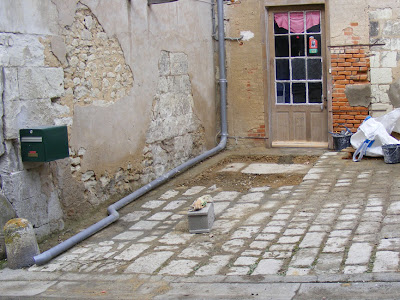 It took a couple of weeks to get co-ordinated (he is a very busy man), but last week M.Douady arrived in his truck with 3 metres of cobbles which appear to be of the same stone but different sizes to what we already had. This meant that on Friday Alex could finish one of those jobs which will make our life more convenient than I suspect we at first thought. We had to get a little creative with the pattern we laid them in, but this reflects what we already had: at some stage a patch of cobbles had been relaid disregarding the original straight lines.

The job's a good 'un 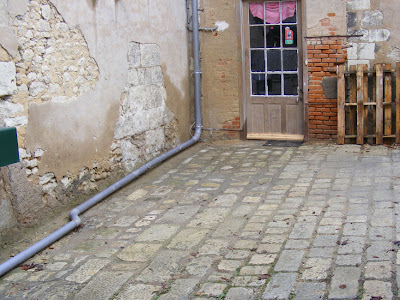 Now we will be able to park the car without falling down a hole, and people approaching our doorbell will have a firm surface to walk on. We're really pleased with the aesthetics of it, as well. It looks just like what we already had on the rest of the courtyard, and given a few months it will be almost impossible to remember where the nasty gravel and cement was.

That looks fantastic !! Such an improvement to your front drive. And Alex is really good with cobbles - he did all ours.