One day in late November our orchard neighbour was selling Pieds de Moutons at the market. These are an edible fungus known as Hedgehog Mushrooms in English. These were not grown commercially, but harvested wild in conifer forests.


A box of hedgehog mushrooms. 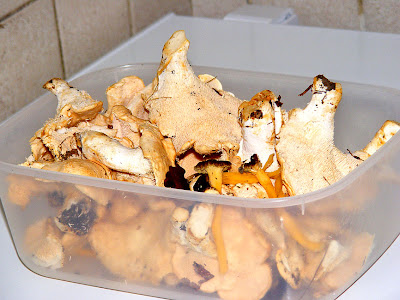 I had never seen this type of mushroom before, but I recognised it immediately because I've seen pictures in fungi fieldguides. It is one of the few truly unmistakeable edible wild mushrooms, that can be identified simply by looking at the pictures in a fieldguide.

The French name translates literally as 'sheep feet', but I think pieds in this case is being used to mean 'small plant' and the English equivalent is probably something like 'vegetable sheep', and their pale undulating shape reminded someone long ago of wool fleece.


The teeth on the underside. 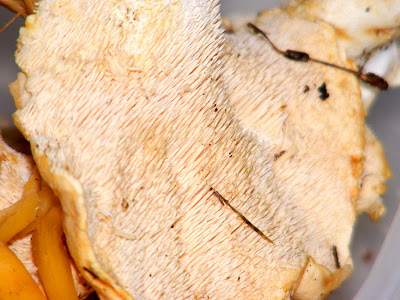 Their scientific name is Hydnum repandum. Their most distinctive feature are the pretty pale salmon pink 'teeth' on their underside. Our orchard neighbour told me I must scrape off the 'teeth' and trim the bottoms of the stems before cooking. This was very easily achieved by turning them upsidedown and gently running a small knife over them, after which an orange stain appeared.


There were a few rather aged Girolles (aka Chanterelles) in the box too. 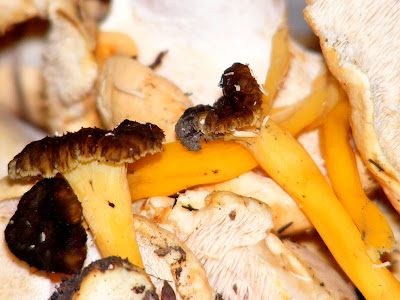 They released an enormous amount of 'juice' once in the frying pan, and I cooked 500g of mushrooms very hard for 10 minutes to reduce the quantity of liquid to about a tablespoon. We ate them immediately in an omelette and they were pleasantly mushroomy, with good firm flesh.

Hello mushroomlovers. Seems that the chanterelles is common in all Europe. We got them as well but not this time of year. It´s a very nice flavoured mushroom. We use to dry them and use in sauces.
Preferably with game. The prickly one is also popular, and as you say, easy to recognize.
Smaklig spis